First league defeat as Donegal lose out to Kerry 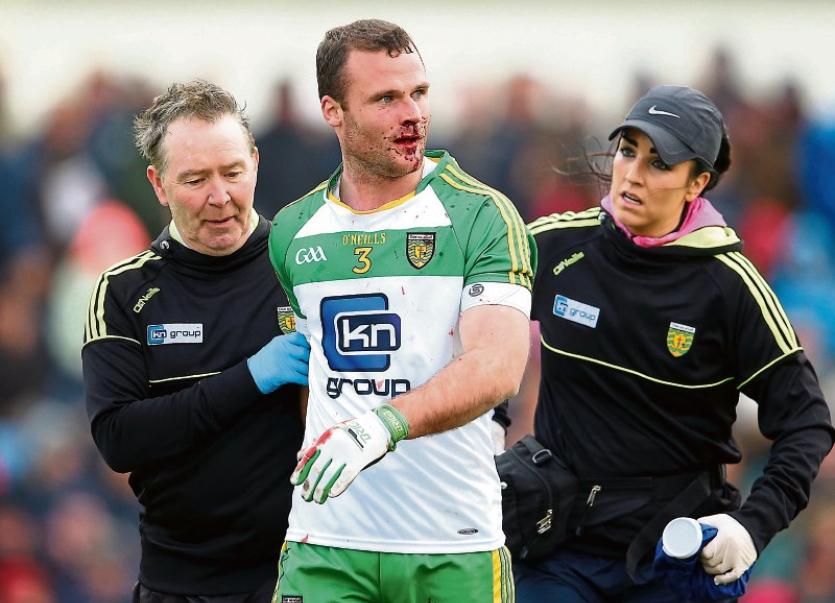 Donegal's wait for a league win in Kerry goes on as they went down by five points in a feisty affair in Austin Stack Park, Tralee yesterday.

The game was not for the faint hearted with two red cards in the opening half; two black cards within 30 seconds for Kerry and a number of unseemly melees.

The first of these came about after a hop ball after six minutes with players rolling around on the ground.

Then away from that action, a red card was shown to Kerry full-forward Alan Fitzgerald after a tussle with Neil McGee. The Donegal full-back had to go off with a suspected broken nose but returned after half-time.

The second red came after another melee on 20 minutes which ended with Leo McLoone being given his marching orders. At the same time Michael Murphy was dragged to the ground without any Kerry player being punished.

It was that sort of game, and referee Eddie Kinsella had plenty on his plate.

The game was not helped also by a gale force breeze which Kerry had at their backs in the opening half. They were in front after a minute when Donnchadh Walsh worked his way through to fist the opening point.

Bryan Sheehan, one of the Kerry players lucky to stay on the field after the melees, had a second point from a '45' before Michael Murphy pointed after Leo McLoone was fouled.

Donnchadh Walsh fisted a second point but Murphy replied after a foul on Ryan McHugh.

Kerry then moved five clear with Bryan Sheehan showing his full array of place kicking, finding the range from all distances to extend the lead to 0-7 to 0-2 by the 28th minute.

There was a double black card for Kerry on 25 minutes, Shane Enright and Denis Daly sent to the bench within seconds of each other; Enright for a tackle on the 45m line while Daly was reported for a third man tackle on Ryan McHugh, who was trying to make a run.

Donegal hit back with a Patrick McBrearty point from a free and they were unlucky to see the ball come back off an upright on two occasions from Rory Kavanagh and Hugh McFadden.

Donegal introduced Neil Gallagher and Martin McElhinney at half-time and they had a blistering opening to the second half hitting four points inside seven minutes to level matters at 0-7 each.

But they were not able to push on and they were cut open for the Kerry goal on 56 minutes. A quick free found Kieran Donaghy in space and he found Peter Crowley driving through to fire past Peter Boyle.

Kerry, with the initiative, hit the next three points from two Sheehan frees and another fisted effort from Donnchadh Walsh to open the gap to 1-10 to 0-7.

Donegal were given hope again when an Eoin McHugh sideline was fielded by Michael Murphy, who turned and drove to the roof of the net.

Murphy added a free after Christy Toye was fouled on 60 minutes but that was to be their last score.

In the final minutes Kerry added further points from Sheehan (free), another fisted point from Barry John Keane and their only score from play from Colm 'Gooch' Cooper in the 72nd minute.

Overall, Kerry were the better side, but Donegal had a brief chance when they got level, but then their discipline was suspect as they stood too close to frees, which were moved on. This was a feature of the game, not just in the second half.

The defeat, their first of the campaign, will give them plenty to ponder on before the visit of high flying Roscommon on Sunday next.

Roscommon kept their excellent run of results going yesterday with a home victory over Down.

Dublin are now the only side in Division One with a 100 per cent record when they came from behind to beat Cork on Saturday night in Croke Park.