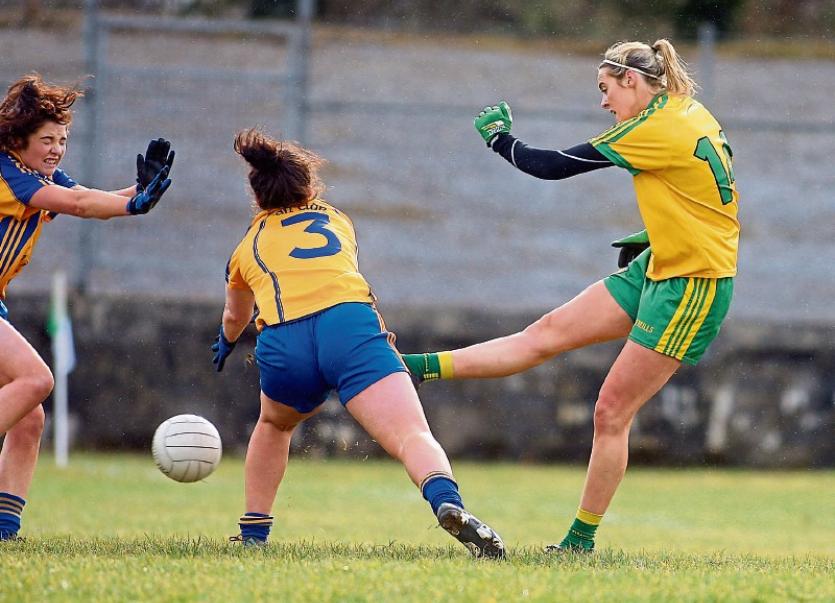 Former All- Star Yvonne McMonagle scored 3-4 in a player of the match performance in the win over Clare.

However, the Glenfin woman was modestly playing down her own contribution to the victory and insisted that  the win was down to a good all round team performance.

She also singled out her clubmate Katy Herron and team captain Niamh Hegarty for their contribution and their roles in her goals.

“I started out in the half forward line to work myself into the game and it worked. I got on a good deal of ball early on and I’m just happy with the end result,”said McMonagle.

“I would not have got the goals only for the quality of the passes I received from Katy Herron and Niamh Hegarty, “she insisted.

“But overall it was a great team performance and we are delighted with the ten point win against a Clare side that like ourselves had clocked up a number of good wins.

“It was a big game for us and Clare and we felt we had a point to prove that we are the top team.

“We are playing well but there's still a good deal of room for improvement and we have three weeks now before our next game to work on a few things and our fitness levels.”

The win means that Donegal have now qualified for the last four in the league and are in with a chance of promotion to the top division next season.

But despite that, Yvonne insisted that Donegal would not be easing off and would go be going all out to win their last two games against Cavan and Kildare.

“We go out to win every game and to prove to ourselves that we are good enough to go and win the league and get promotion to Division One.

“Just because we have qualified for the semi-final doesn’t mean we are going to sit back in our next two games. We are going to go out and hopefully win those games against Kildare and Cavan and top the table and then go on and win the final and get promotion.”