Hard work and teamwork the formula for success - Byrne 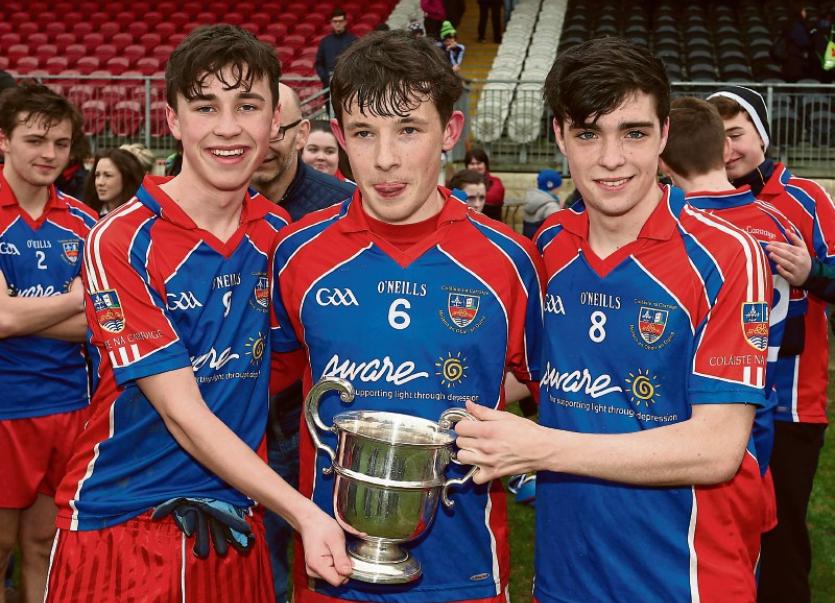 As far as coach Neilly Byrne was concerned Coláiste na Carraige’s first Arthurs Cup success was down to hard work and teamwork.

“It was a fantastic team performance and that is what we expect from them. That is the way we train. We trained in Glen right through the winter a couple of times a week,” Neilly told the Democrat afterwards.

“We have a panel of 26 and we never had to go chasing any of them. This particular bunch of players wanted to win and I suppose what really pushed us on was the defeat last year in extra-time.

“We felt last year that we left it behind us and we said after that game that this was going to be our year.

“We got off to a great start and built up a good lead and were always in control of the game. But you are always worried no matter how much work you do that you would give away a goal.

“They hit the bottom of the post in the first half and they had a couple of goal chances in the second half and if they had scored them it might have been a different game. We might have got the wee bit of luck that at times you need but those lads deserve whatever they get because they put in a huge effort all winter to get to where they are today.”

“Aaron Doherty, Brian O’Donnell, Lanty and Gary (Molloy), that diamond around midfield all had big games today and they are all fantastic footballers and I expect them to have very bright futures.

“But everybody gave a hundred per cent. I thought Fionn Gallagher had a big game at full-back. Colm Garvey made a number of very good saves.

“The defence as a unit I thought played very well and David Love our full-forward scoring two goals and we still took him off.

“But that is the way it is; we have a number of good players too on the bench and overall every man out there gave 100% for the jersey.”

Aaron Doherty and Brian O’Donnell are joint captains and they jointly raised aloft the Arthurs Cup following the presentation.

“It is unbelievable,” said Aaron Doherty. “We were here last year and lost to the Derry champions, St Mary’s, Clady, after extra-time so we didn’t want that to happen again this year,” he added.

“We were determined today that we were going to go out and give it our all and thankfully we did and we won and are the champions.

“It was comfortable enough, I suppose, but they had a couple of goal chances and kicked a number of wides in the first half.

“We got off to a flying start and built up a good lead. But they had a purple patch after we sat back and let them back into it but we pushed on again in the second half to win well.”

Brian O’Donnell kicked two points in a man of the match performance.

However the Lion hearted midfielder was playing down his own contribution afterwards and insisted it was a team effort.

“I don’t know if you could give any player man of the match in that game. I think all of the players played brilliantly to win and played a huge part in winning the cup for the first time in the school’s history. .

“After last year we were all determined to return this year and win the cup and we have done that now but it has taken a lot of hard work.”

The midfielder also paid tribute to the contributions to the success of manager Paddy Boyle and coach Neilly Byrne.

“Paddy and Neilly have put in a huge effort and it is hard to put into words how much effort they put in and the amount of time they gave up freely to achieve what we have achieved today.”