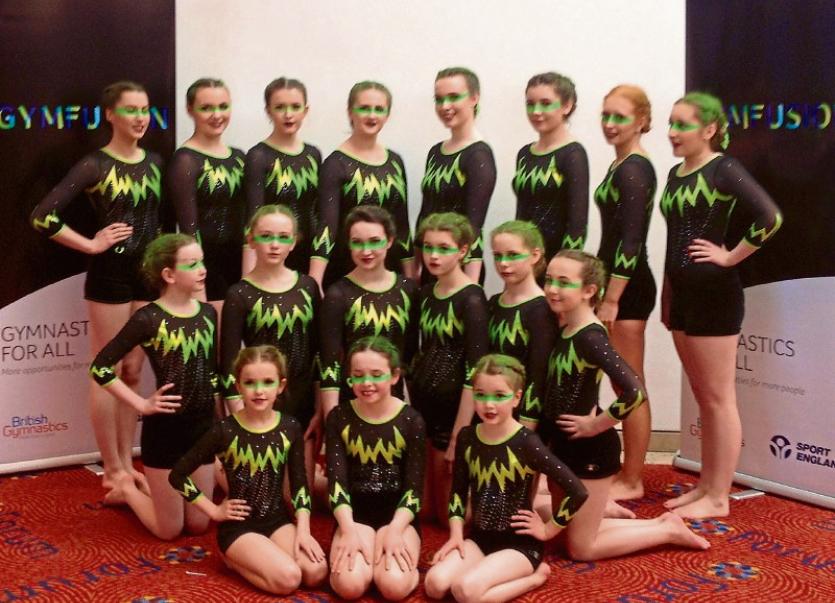 Since its launch in 2011, GymFusion has seen over 3000 performers take part. 10 events are set to take place across England and Northern Ireland.

This is Finesse’s fourth time to take part in GymFusion which was held in the Millennium Forum, Derry this year. Creative performances from all ages, abilities and disciplines of gymnastics provided the audience with a fantastic show. Through performing together, GymFusion showed the diverse nature of gymnastics in a way that no other event could. It brought together the gymnastics community, encouraged performance and valued all disciplines.

The event was Carnival themed and Finesse were delighted that two of their teams were part of a spectacular showcase of talent. Beautifully executed gymnastics skills, energetic dance moves as well as some awesome Sports Acro balances certainly impressed the large audience in attendance. All of these aforementioned skills combined in a choreographed routine make up the discipline of Gymnastics for All (GFA).

The Finesse Senior Display Team performed their “Green Lantern” routine. This dramatic and gripping routine caught the attention of the large crowd. They had the audience on the edges of their seats as they executed highly skilled balances in excess of 15feet high. This confident team are no strangers to a GFA event or a gymnastics floor, having performed and competed at many events across Europe in recent years.

The club’s Junior Squad, a relatively new team of 16 gymnasts opened the show with their appropriately named routine “Let the Show Begin”. A colourful and upbeat performance saw the audience and other participants clapping to every beat of this routine. This is only the second time for this team to perform at a public event and they certainly did themselves proud.

The club would like to acknowledge the hard work and effort put in by the coaches and resident choreographer as well as the dedication of today’s participating gymnasts and their families.

It was with heavy hearts that the Finesse Senior Team said goodbye to a much loved and revered member of the team. After almost five years Aoife O Connor has hung up her leotard but will always be remembered for her dedication, excellent work ethic and fun loving personality. Finesse Gymnastics Display Club would like to wish Aoife every success in the future.