Paddy Beág to be honoured by GAA President 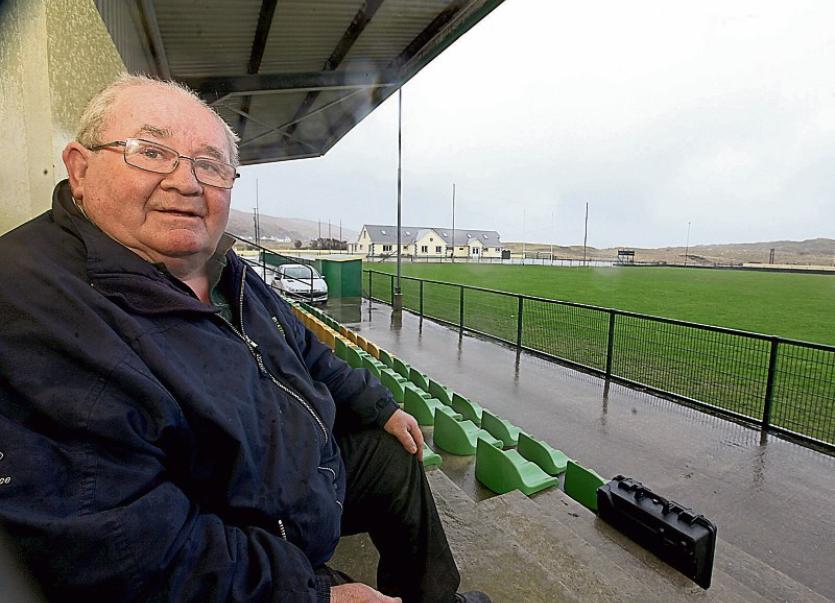 These words often describe these men and women to perfection and there are times too when those words do not do justice to their subjects.

They most definitely apply to Naomh Columba clubman, Paddy ‘Beág’ Gillespie from Glencolmcille, who is due to be honoured with a Presidential Award at a special banquet in Croke Park on Friday night.

When it comes to describing Paddy ‘Beág’ Gillespie you have also add ‘colourful’ because not only is Paddy ‘Beág’ a stalwart and a character he is also a ‘colourful character.’

Paddy Beág can capture a room with his quick wit and infectious humour and has, down the years, brightened up the many a gathering. Paddy Beág is one of the great characters of Donegal for many a long year.

He is known the length and breadth of Donegal GAA and even much further afield and to use any other term of combination of words do not fully describe the man from Glencolmcille.

Born in Downhill in Derry in 1943, his father John Gillespie (Brianie) from Doonalt, Glencolmcille was a driver with the US forces based in Ballykelly, Derry, during the Second World War. His mother was Bridget O’Donnell from Meenaneary. They had first emigrated to Scotland.

After the war ended the family moved back to Cashel, Glencolmcille, when Paddy was three and he attended Cashel National School.

A love of country and pride in parish attracted Paddy ‘Beág’ to the GAA from an early age.

He has served his club at many levels over six decades from player to official to team management. He also falls into the category of those great stalwarts who have done everything from cutting the grass, to lining the pitch, to manning the biscuit tin on match days, to fighting the club’s corner at the county board.

He has also represented the club at Scór and is passionate about the Irish language and culture and is President of the All-Ireland Comórtas Peile na Gaeltachta.

A forward who knew no fear, he played for Naomh Columba, Kilcar and the Tir Chonaill Gaels and Round Towers clubs in London when he was domiciled in the English capital for over a decade in the 1960s.

Paddy Beág also played Leinster Colleges football and hurling during his years in the secondary school in Ballinakill, County Laois.

“There wasn’t much Gaelic football played here in Glencolmcille when I was growing up. There was no u-10, U-12 or U14 competitions in my day,” explained Paddy.

“It was nothing like it is nowadays. The first game I remember playing was an U-16 game against Killybegs.

“We had just the one game and that was it. All of my underage football was played during my years at college in Ballinakill in Laois, at the Cistercian Brothers. It is called Haywood Community School nowadays and is a day school but in my time it was a boarding school.

“In my four years in Ballinakill, I played in Leinster Colleges, in both football and hurling. I took to the football well and made all the teams in my four years and while I wasn’t a great hurler I got by.

“The standard in football was very high and we played in the B competition against the likes of St Peter’s, Wexford; Tullamore CBS, Portlaoise CBS and Dundalk CBS.

“The nearest we came to winning anything was an U-16B final but Dundalk CBS beat us in the Leinster final.”

During his early playing years there was no club in Glencolmcille so he played all his underage football with Kilcar.

“I played minor for three years with Kilcar and I also played a couple of years senior for Kilcar because we had no club here in Glen. In those years Kilcar was the only club from Inver bridge to Glen Head.”

Paddy was a member of the Kilcar team that lost the 1963 senior championship final to Sean MacCumhaill’s.

The following year, like so many young men and women in Glencolmcille at the time, Paddy Beág took the emigration boat to England and London.

He was 21 when he landed in London and joined the Tir Chonaill Gaels club.

“I played for Tir Chonaill Gaels for my first year in London and then joined the Round Towers.

“Con O’Gara, a neighbour of my own from home, was the chairman of the Towers so I decided to join the Towers.

“The Gaels had a good team at the time. Christy Boyle from Glenties and Donal Boyle from Dungloe were their big men with the Gaels in those years.

“John Bradley from MacCumhaill's and the late Francie Monaghan from Donegal Town and myself was the half-forward line the year I played with the club.

“John and Francie were on the Donegal minor team the year before, 1963, that were beaten in the Ulster minor final by Down.

“The Round Towers had a good team that time too; we won the British Championship the year I joined them, 1965.”

Paddy Beág played with the Towers for four years and returned to Glen in 1968. By that stage he had met and married Ann O’Boyle from Elphin, Roscommon and the first of their six children, Sharon and Damien were born. His other children, all born in Donegal, are Sinead, Pauric, Mairead and Aidan.

By the time that Paddy Beág returned a new club had been formed in Glencolmcille, Naomh Columba.

“While I was away a number of the lads at home had formed a club and I immediately started to play with the club on my return. Pride in the parish and own identity was the reason for the forming of the club.

“It was a junior team in the early years.”

Paddy played on for a good few years but a broken leg in a club game had an effect and at just 27, Paddy Beág’s best playing days were behind him.

It was at this stage he begun his career in club administration and the first of a number of terms as secretary, followed by club chairman.

“I learned a lot in my time with Round Towers on how a club should be run and I put a lot of what I learned into practice. I was secretary and chairman a number of times.

“For years myself and Francie Rua (Cunningham) swapped around the positions.”

He also had a number of spells as senior team manager and guided Naomh Columba to a Donegal Junior championship in 1974. They defeated Cloughaneely in the final having lost the junior finals of’ ‘72 and ‘73 to St Naul’s and Termon.

He also served the club for years as a mentor/selector right up to 1990.

“My last year as a selector was in 1990. We beat Killybegs by a point in that final. After that I decided it was time to move on and leave it to the younger crowd.”

A Gaeilgoir, Paddy Beág also has a deep interest in the Irish language and culture and participated and promoted Scór in the club and was the member of the first Donegal winners of an Ulster Scór Sinsir in trath na gceist the early 1970s.

Unfortunately, Paddy Beag and Naomh Columba missed out on an All-Ireland title when pipped by Ballygar, Galway, that had Galway four time All-Ireland football winner Mattie McDonagh in the line-up. That All-Ireland final was in the RDS.

“Scór is a great competition; the standard was very high back then and we (Naomh Columba) always did well in Scór and we have a good Scór tradition and I’m delighted to say we have maintained that tradition down the years right up to the present day.”

Paddy Beág also managed Naomh Columba to the first of their two All-Ireland Senior Comórtas Peil na Gaeltachta titles in 1978 and thus a long association with the Comórtas right up to the current day.

He is currently one of a number of Leas Uachtarán of Comórtas Peil na Gaeltactá Naisiuntá.

Paddy Beág will be presented with his award by the President of the GAA Aogan Ó’Fearghail on Friday night.