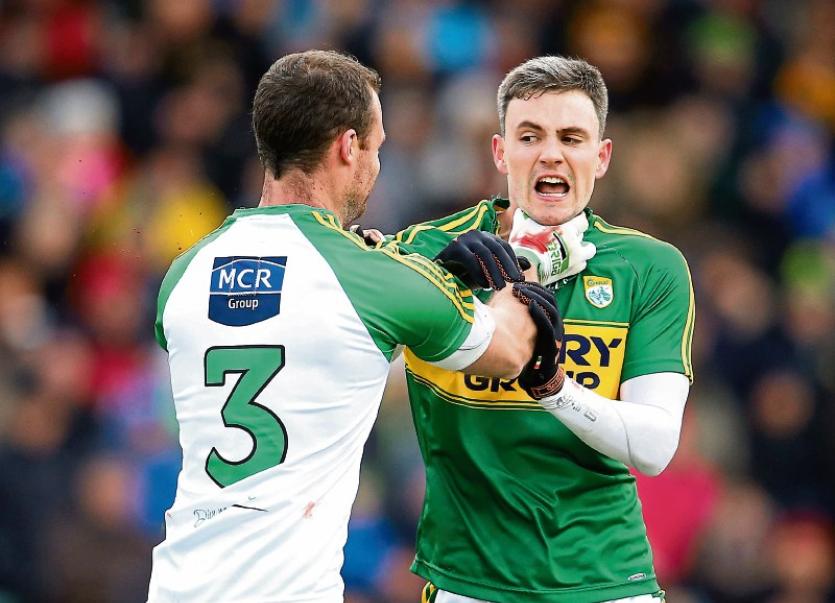 A day to forget

The weekend trip to Tralee will not be something that anybody will want to remember for long. Conor McGregor was drawing blood around 6 a.m. on Sunday morning before losing his fight, but he would have been very much at home in Austin Stack Park later on Sunday as Donegal and Kerry went to battle.

With Kerry seemingly intent on getting two league points by hook or by crook, the tie was fractious from start to finish.

The referee had the opportunity to set down a marker in the opening minutes, but failed to take any action after the first melee. After that, it was an uphill battle for him. In the end Kerry were cuter and Donegal lost their way as a result, especially in the second half when they got on the wrong side of referee, Eddie Kinsella, who lost patience and kept moving the ball forward.

The benefactor, Bryan Sheehan, was lucky to be still on the field to show his skills; as was Kieran Donaghy. But then Donegal had players who sailed close to the wind also. If there is any lesson to be learned for Donegal, it is that there needs to be a much more controlled approach, both on and off the field. Kerry got away with kicking the ball into the stands on a number of occasions. Also, the Kerry side were physically much stronger than Donegal and in that regard Donegal need to pick their battles more carefully.

A word also about the nastiness which pervaded the home support in Tralee. It was very hostile and certainly there was nothing sporting about their reactions. An example was when Kieran ‘Star’ Donaghy almost took the head off Ryan McHugh in a tackle and after McHugh made a recovery (he could easily have been stretchered off), every time he got the ball after that, he was booed. It was as if the Kerry support were blaming him for trying to get ‘Star’ sent off.

All in all, it was a game to forget, but also one from which lessons need to be learned. Manus Boyle’s comment that all this aggro builds up and can come back to haunt you when 50/50 decisions are being made down the road is very relevant.

Sunday next now becomes critical if Donegal are to be involved in the latter stages of the league. It is Donegal’s final home game and a win would put them in a very strong position for a semi-final slot. The other avenue to the semi-final would involve getting points in Croke Park or Clones in the final two games.

There isn’t much to be said about the deliberations of the CCCC in Croke Park in handing out a ban to Neil McGee and fines of 7,500 euro on both counties, apart from the fact that only one player was singled out.

Sunday’s game has been confirmed as an all-ticket game in O’Donnell Park, Letterkenny. Since that decision was made I have had a number of people contact me who wonder why the game was not changed to MacCumhaill Park to allow everybody who wants to go and support Donegal to do so. The recent league game between Donegal and Mayo attracted 11,000 to Ballybofey and going on recent reports that The Rossies are travelling in big numbers, it is expected that demand will exceed supply for Sunday’s game.

It may well turn out that the demand may not reach the 8,200 which O’Donnell Park holds, but it does beg the question: Are we catering for all of our supporters if we limit the spaces available? With tickets needed for everyone, including U-16s, it is a valid question.

The same would be true of Fr. Tierney Park, Ballyshannon. Both of these secondary grounds are very proud of hosting intercounty games, but the needs of supporters should be top of the agenda when venue decisions are being made.

It is a difficult decision for local administrators to move an intercounty game, but sometimes difficult decisions are needed. I’m told that Roscommon supporters were far from happy when their game against Down last week was moved out of the county to Pearse Park, Longford, but it was the logical decision with no venue available within Roscommon capable of holding the expected crowd.

But hopefully all will go well on Sunday, on and off the field. After last Sunday’s debacle, the only way is up!