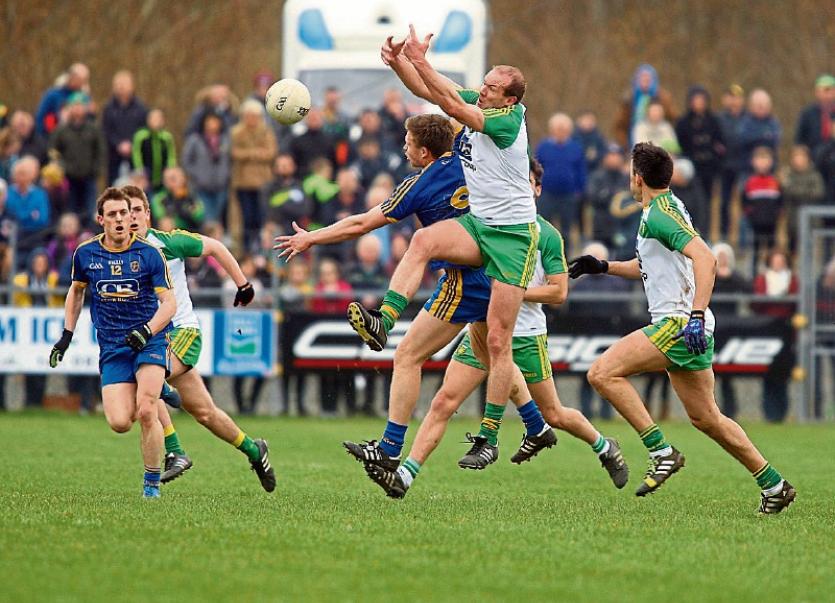 Donegal went down for the second week in-a-row against a Roscommon side who are riding on the crest of a wave at the moment.

It was the Rossies' fourth win on the trot in a thrilling encounter in O'Donnell Park, Letterkenny.

Roscommon were ahead from start to finish and even though Donegal improved significantly in the second half, the loss of Odhran MacNiallais to two yellow cards in a three minute period between the 50th and 53rd minute, followed by a magnificent goal from Cathal Cregg, left the Connacht side as convincing and deserving winners.

Donegal will have plenty to review in this game as their defence was cut to shreds at times and but for some magnficent saves from Peter Boyle in the opening half, and Niall Daly blazing wide, the game could have been over at the break.

Roscommon just seemed fitter than Donegal and their running game caused the Donegal defence endless problems. There was much to admire also from their long-range shooting, with some wonderful scores.

There is no doubt that Roscommon have improved greatly this year under the new management and they are amassing some very healthy scorelines.

Donegal did show some fighting spirit in the second half which was encouraging, but they left themselves with just too much to do after the opening half.

In the opening quarter, the Roscommon captain Ciaran Murtagh was afforded acres of space and he took full advantage, helping Roscommon to a 0-4 to 0-1 lead by the 9th minute.

That gap was extended out to 0-7 to 0-1 by the 18th minute with points from Murtagh, Fintan Cregg and Conor Daly, the latter after a magnificent double stop from Boyle.

Niall Daly blazed wide with just Peter Boyle to beat on 27 minutes just after Odhran MacNiallais got Donegal's first and only point from play in the half.

Frees by Fintan Cregg and Murtagh pushed Roscommon 0-11 to 0-4 clear as Donegal took remedial action, sending Karl Lacey in to replace Eamon McGee, who was in trouble against Senan Kilbride. Mark McHugh was introduced earlier for Anthony Thompson.

In added time frees from Michael Murphy and Patrick McBrearty gave Donegal some hope, reducing the margin to five points.

On the stroke of half-time Roscommon lost half-back, Conor Daly to a black card, for a tackle on Michael Murphy.

Donegal did very well in the second half, thanks to heroic work from Michael Murphy, to reduce the margin to two points, 0-15 to 0-13 in the 55th minute.

Prior to that they lost Odhran MacNiallais, who foolishly picked up a second yellow card in three minutes. They were fighting a losing battle with 15 but it was really an uphill task after that.

Then came a wonderful finish from Cathal Cregg after a sweeping move which finally ended any Donegal hopes of a comeback. However, they kept fighting to the end with points from McBrearty, Ryan McHugh and two from Murphy with the Glenswilly man rattling the crossbar with a free in the final minutes.

The big travelling support were out on the O'Donnell Park pitch as the final whistle sounded to hail their heroes, who now have their final two games - against Mayo and Dublin - at home.

Donegal have two games left - both away - to Dublin and Monaghan, which will make picking up any more league points difficult. However, six points may be enough to keep them safely in the top flight. They will be looking for Roscommon to do them a favour and defeat Mayo which would condemn Mayo and the already doomed Down to the drop.