Well all the hard work is over and it's now down to the horse's and Jockeys to fight it out at the greatest show on turf which starts tomorrow. This year Irish trainers are going for the jugular with a massive number of horses crossing the Sea including sixty from Willie Mullins Closutton yard alone. Read on for all the up to date information regarding Ireland's top chances. 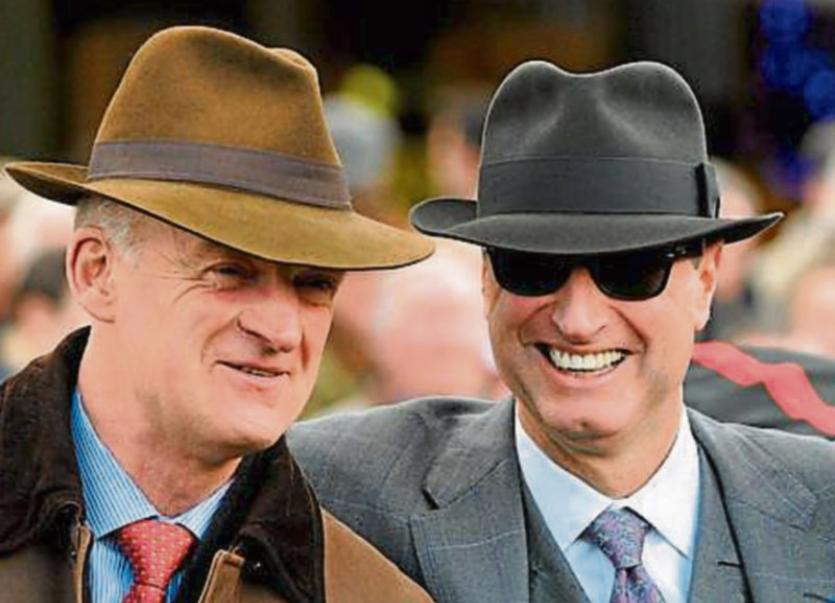 Don Cossack, Vautour and Cue Card all feature among 14 horses still in contention for the Timico Cheltenham Gold Cup on Friday following the six-day entry stage.

The Gordon Elliott-trained Don Cossack is the narrow favourite for the blue riband as he bids to make it third-time lucky at the Festival.

Elliott has a huge team assembled for the meeting - and is "most looking forward" to Don Cossack.

Speaking at Limerick on Saturday, he said: "I am most looking forward to Don Cossack, but we've lots of chances in the handicaps if things go right.

"I'll have 23 runners and at this stage I'm looking forward to getting them out of the yard. I have one load (of horses) going tonight and another load on Monday."

Vautour is one of six possible runners for Willie Mullins, with the master of Closutton also hoping to call on last year's runner-up Djakadam and RSA Chase winner Don Poli, among others.

Colin Tizzard's Cue Card heads the home team having won the Betfair Chase at Haydock and the King George VI Chase at Kempton already this season, meaning he is in line for a £1million bonus if he can complete the hat-trick at Prestbury Park.

Other contenders include Alan King's Hennessy hero Smad Place and Noel Meade's Road To Riches, who was third in last year's Gold Cup but could yet switch to the shorter Ryanair Chase on Thursday due to the embarrassment of riches owners Gigginstown House Stud possesses.

Ante-post favourite Ivanovich Gorbatov is one of 25 juveniles confirmed for the JCB Triumph Hurdle at Cheltenham on Friday.

Officially trained by Aidan O'Brien but chiefly prepared by his son Joseph, the JP McManus-owned four-year-old made a sparkling start to his jumping career at Leopardstown's Christmas meeting before suffering an odds-on reverse on his return to the track for last month's Spring Juvenile Hurdle.

Despite that disappointing display, Ivanovich Gorbatov remains at the top of the betting, with connections hopeful he will bounce back on the forecast sounder surface next week.

The Paul Nicholls-trained Zubayr is a major contender after impressing on his British debut in Kempton's Adonis Hurdle, while Alan King can call on Sceau Royal, Who Dares Wins and Gibralfaro.

On The Fringe is one of 36 horses left in the St. James's Place Foxhunter Chase following the six-day entry stage.

Enda Bolger's charge won the race last year and heads the ante-post betting. He is set to be ridden by brilliant amateur Nina Carberry.

Colin McBratney's Marito is another major contender for Ireland, as is the Henry de Bromhead-trained Aupcharlie.

Victoria Pendleton's mount Pacha Du Polder will attract much of the attention in the race.

It was confirmed earlier this week that the dual Olympic cycling champion would achieve her dream of riding at the Cheltenham Festival, having bounced back from a Fakenham fall by guiding Pacha Du Polder to a wide-margin success at Wincanton.

As expected, ante-post favourite Annie Power has been supplemented for the Stan James Champion Hurdle at Cheltenham on Tuesday at a cost of £20,000.

In the absence of last year's one-two, Faugheen and Arctic Fire, Willie Mullins has rerouted a couple of star mares from their original targets with Vroum Vroum Mag pencilled in to line up in the OLBG Mares' Hurdle.

"Annie Power will be supplemented for the Champion Hurdle while Vroum Vroum Mag's preferred option will be the OLBG Mares' Hurdle," Mullins told OLBG.com.

As well as Annie Power, Mullins could run Nichols Canyon and Sempre Medici.

Nicky Henderson intends to run all five of his entrants and said My Tent Or Yours is likely to be ridden by Barry Geraghty, with Mark Walsh on the fellow JP McManus-owned runner, Hargam.

Owners Simon Munir and Isaac Souede will be represented by Peace And Co and Top Notch, but retained jockey Daryl Jacob has yet to pledge allegiances.

Nico de Boinville is expected to get the leg-up on whichever horse Jacob does not ride.

Andrew Tinkler will partner the other Henderson contender, Sign Of A Victory, who wears the same Matt and Laura Morgan colours the jockey carried to victory on Call The Cops in the Pertemps Final last year.

"Everyone is just sitting on the fence at the moment because of the weather," said Henderson, who has won the Champion Hurdle a joint-record five times.

"I'd imagine Barry will ride My Tent Or Yours, which means Mark Walsh would be on Hargam.

"Andrew Tinker will almost certainly ride Sign Of A Victory, but as for the other two, we're still not sure.

"Daryl will come and have a sit on them. Top Notch was out (Wednesday morning) and worked well. He'd love the ground (soft) to stay as it is, really.

"The softer ground wouldn't inconvenience Peace And Co too much but he still has one more piece of work to do.

"Basically, Daryl will probably leave it late until he has to decide."

The progressive Lil Rockerfeller joins the The New One, who is having his third run in the race, Camping Ground and Old Guard on a list of 13.