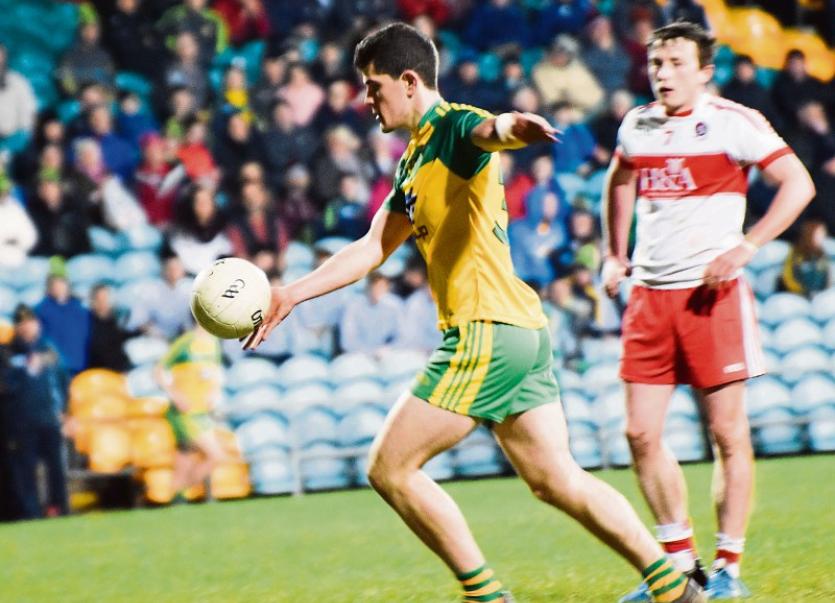 Derry manager, Fergal McCusker, was far from happy as Donegal edged this Ulster quarter-final with a late pointed free from Stephen McBrearty.

McCusker vented his frustration at the final whistle as referee, Niall McKenna, added almost eight minutes. He had some justification as this game should probably have gone to extra-time.

In an open first half, Donegal were much sharper up front and led at half-time by 0-9 to 0-3, recording just one wide.

Derry, on the other hand, did not avail of their chances, recording five wides.

Before half-time both sides had goal chances with Danny Tallon hitting the Donegal crossbar while Jamie Brennan hit a post when trying to lob the Derry ‘keeper after a poor kick-out.

Derry got back in the game in the second thanks to a goal from full-forward Niall Loughlin on 43 minutes.

A quick follow-up point from a Niall Loughlin free left just two between the sides and then disaster struck for Donegal as a run by Niall Toner saw the ball bobble in front of the Donegal goal. No Donegal player took control and substitute Ruairi McElwee nipped in to toe poke to the net and one point lead for Derry.

Donegal almost responded with a goal of their own as Jack O’Brien saw himself one-on-one with the ‘keeper but Ciaran McCloy saved. The ball ran free and Cian Mulligan, with an open goal, somehow lofted the ball over the bar for the equaliser.

Ciaran Thompson won a free for Stephen McBrearty to edge Donegal ahead in the second minute of added time, but Derry hit back with Niall Toner levelling.

With almosts five minutes of added time played, Stephen McMenamin broke through to find Stephen McBrearty on his shoulder. McBrearty was fouled and the free was moved on for dissent leaving a simple tap over for the Kilcar man - which proved to be the winner.

Derry had lost Meehaul McGrath to a second yellow card with normal time almost up and then after McBrearty’s point there was a melee with a number of players involved which led to Stephen McMenamin also getting a second yellow for Donegal.

There was still time for Ryan Lee of Derry to see black before the referee finally brought a halt to the game with almost 38 minutes on the clock.

In the end Donegal knew they had got out of jail and manager, Declan Bonner, admitted that.

They were going reasonably well until about the 40th minute, but a raft of substitutions seemed to unsettle them and Derry took control and the Oak Leaf boys will feel that they should have got extra-time at least.

Donegal will play Derry in the semi-final on Wednesday, 30th March.