ERNE WANDERERS ARE THE NEW LEADERS IN DIV 2 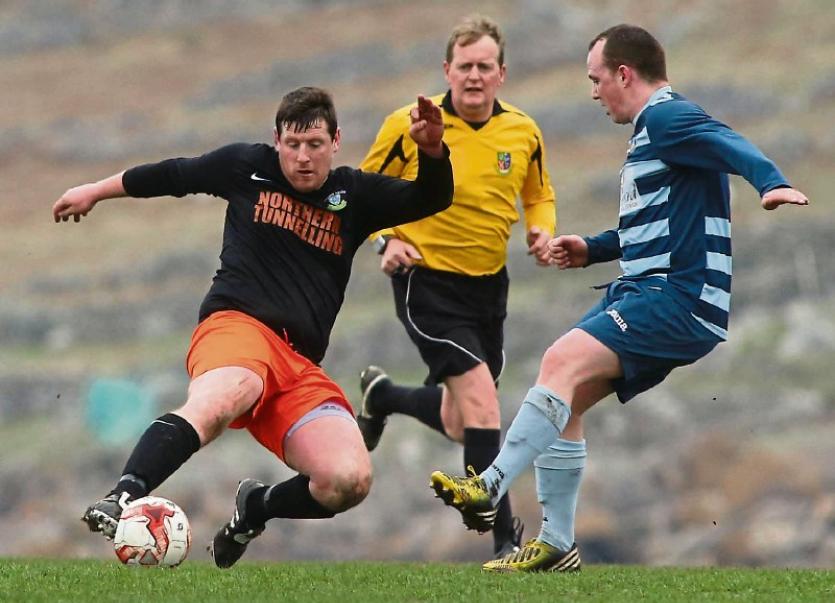 With none of the top three sides in league action yesterday, the main focus of attention in the Brian McCormick Sports Premier Division was on the battle to avoid the drop.

It means the situation at the bottom of the table is hotting up. Cappry looked doomed and are six points adrift at the bottom

Then come Gweedore Celtic, Rathmullan Celtic and Kildrum Tigers who all sit on 14 points.

In the First Division, the top two of Lagan Harps and Convoy Arsenal, both recorded victories yesterday. They continue to be separated by just a point with Lagan leading the way.

In Division Two, there was a significant change at the top. Erne Wanderers are the new leaders after Deele Harps were surprisingly held at Dunkineely Celtic.

The Derry side included a number of first team players and in the end, proved that bit too strong for the Donegal Premier Division leaders.

Glenea picked up another three points in their battle against relegation. Ciaran Mc Geady had them ahead after five minutes when he converted Aodhan Ferry’s flick-on. He almost doubled their advantage on seven minutes but was thwarted by a good save from the Cappry keeper.

Lee O’ Brien added Glenea’s second on 38 minutes when he latched onto Mc Geady’s pass. Kevin Mulhern got their third before the interval when he headed home Darren Mc Geever’s cross.

Two goals were enough to win this Premier Division match for Kilmacrennan Celtic. Christopher Dillon on seven and Daire Mc Daid on 69 got the all-important strikes against a Gweedore Celtic team who were never too far behind to turn the game around.

Colin Ferry did get a goal for the Screaban men but it proved to be little more than a consolation strike as Kilmacrennan continued their good recent run of form.

Elswhere on Sunday, Castlefin Celtic moved into third spot after a 4-3 win at Rathmullan Celtic.

Lagan Harps kept their promotion hopes alive with a comfortable win over an understrength Cranford United.

Ronan Sweeney opened the scoring on ten minutes and Philip Doran made it two on twelve minutes.

Marty Brogan and Martin Hunter got the third and fourth Lagan goals as they registered with ease. Hunter got his second and third before Michael Devlin made it seven on 65 minutes. Philip Doran completed the scoring on seventy five minutes.

It was a case of Devine Inspiration for Lifford Celtic as they defeated Keadue Rovers to gain three worthwhile points from this Division One encounter at Greenbrae.

The lively frontman scored after 25 minutes and again before the break to see his side go in at half-time with a two goal lead.

The second half saw Lifford trying to find a third to completely kill the game off but Keadue were resolute without causing the Lifford defence too much worry.

Paul Martin and Stuart Carlin were the mainstays of this Lifford victory, defending effectively and leading from the back.

David Gethins and Colin Carlin also had good days in the home ranks.

This match was end-to-end with both sides having chances and near misses.

The amazing thing was that it took until the 85th minute to see an opener. Conor Mc Monagle made the breakthrough from ten yards, heading Donegal Town in front.

Joe Mc Intyre got a second for the visitors three minutes later and the points were destined for Donegal Town.

As the scoreline suggests, this was a drab enough encounter at the Deele College Grounds. Neither side could find the net despite both creating a few chances.

Kerrykeel will be happy with a point on the road while Raphoe will be disappointed not to win at home.

Jonny Robb opened the scoring for Convoy Arsenal on 13 minutes when he converted from the penalty spot after Lee Guthrie had been fouled.

Gweedore immediately started their fightback and were almost rewarded on25 minutes when they hit the Convoy crossbar.

Two minutes later Christopher O’ Donnell made a great save to maintain the home side’s lead. The game was even enough until the 80th minute when Shane O’ Donnell equalised for the visitors.

With a draw looming Robb latched onto Emmett Patterson’s ball over the Gweedore defence and the reliable hitman got his and Convoy’s second to secure the victory.

The win means Convoy Arsenal stay in touch with the leaders Lagan Harps. Indeed, only three points separate the top three in this division.