ALLIANZ NATIONAL LEAGUE DIVISION ONE - ROUND 7 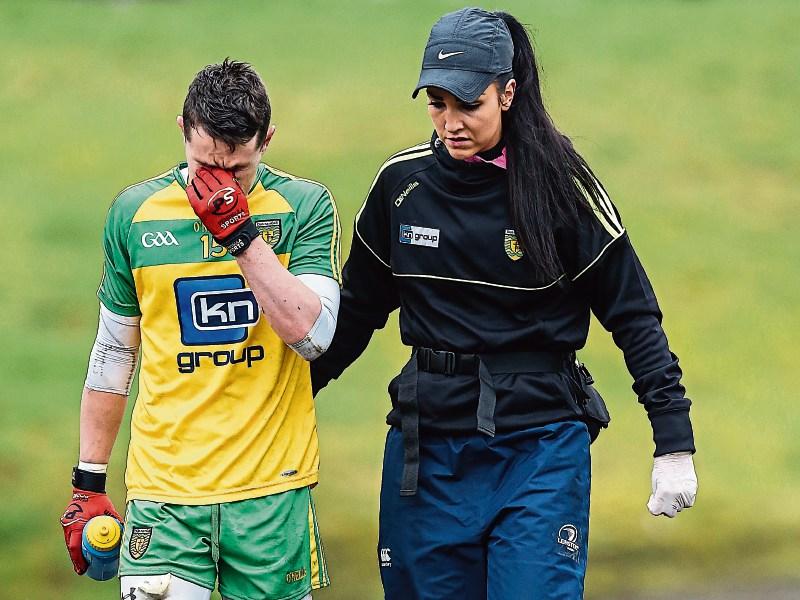 Donegal suffered their fourth win on the trot but remarkably are still in the semi-final of the Allianz League Division One.

It took an injury time point from corner-back Colin Walshe to save Monaghan’s Division One status in a competitive game in Castleblayney.

Monaghan looked at sea in the first half but they found their way in the final quarter to get the much-needed victory.

There was plenty of tension at the end of the game as the sides were level with time up. However, the Farney men showed the greater will to win. Donegal lost two players in added time to black cards.

Michael Murphy had Donegal on the board inside a minute and the McHugh cousins added two more as Monaghan were really struggling.

A free won and converted by Patrick McBrearty had Donegal in control and then Donegal opened up the Monaghan defence for Martin McElhinney to fire Donegal seven points clear on 19 minutes. McElhinney had combined with Leo McLoone and the St. Michael's man finished in style.

But Monaghan suddenly found their shooting boots and Dermot Malone found a gap in the Donegal defence to set up Daniel McKenna. His first effort was stopped but he picked up the rebound to fire to the net.

McKenna added a point immediately and even though Michael Murphy found the range from a free, Darren Hughes and Conor McManus with two, cut the gap to two points as half-time approached.

Donegal finished the half with a well worked point, Patrick McBrearty at the end of the move to leave Donegal 1-7 to 1-4 in front at the break.

The second half was more open as both sides found the going difficult. Once again it was Conor McManus who got Monaghan back in the game with a free after just 37 seconds.

Donegal had a goal chance on 39 minutes as Odhran MacNiallais found Patrick McBrearty with a crossfield ball. McBrearty won the ball well and turned his man but Ryan Wylie made a great block as McBrearty went for goal with his right.

Michael Murphy converted a '45' on 45 minutes, while McManus replied from a free. Anthony Thompson tore forward to hit a good Donegal point to put them three clear again on 54 minutes, but they were not to raise another flag and that was the reason they didn't get anything from the match.

Monaghan, with the crowd getting behind them, came forward in droves and thanks to some favourable refereeing decisions, Ryan McAnespie and two Conor McManus frees had them level with five minutes of normal time left.

With both sides out on their feet, Donegal lost Neil McGee to a harsh black card as the game entered added time. Kieran Hughes was wide from the free, but then with four of the five added minutes played, Colin Walshe stole up along the sideline to fire over what proved to be a very valuable winner for Monaghan to keep them in Division One for next season.

For Donegal, there will be plenty to ponder, having led by seven points at one stage in the first half, but they willl be happy with some aspects of the performance.