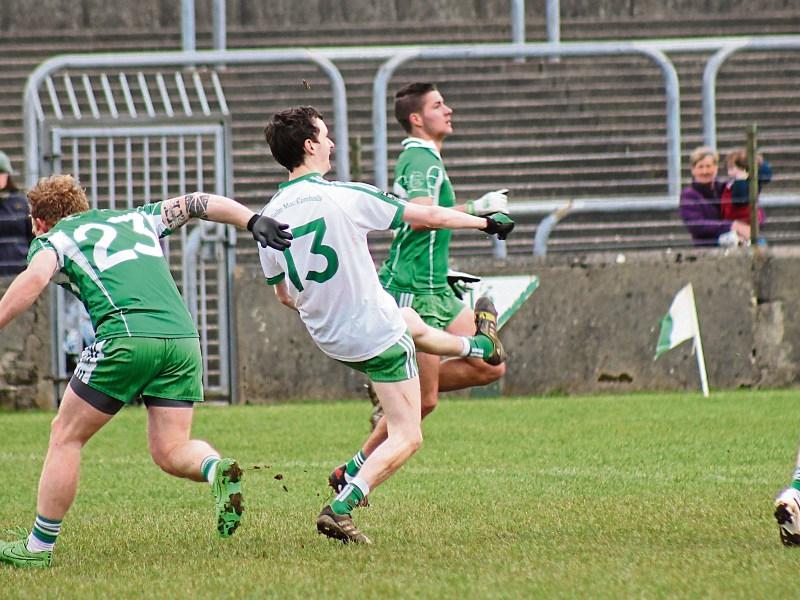 The game started very lively with Mac Cumhaills scoring first in the half minute when Andrew McCloskey pumped an early ball in and Mulligan produced a fine score and the Mountcharles men replied from Stephen Griffin through a free soon after. Both teams traded points once again through Mulligan, from play and Griffin from a free and Nauls took the lead shortly after when Mac Cumhaills conceded a soft free on the 13m line which Griffin pointed.

The opening 15 mins were a lively affair and the home side were on level terms again when Darren O’Leary fed the ball to Mulligan who hit his third point from play and soon retook the lead when Darren McGowan played Mulligan in, this time kicking over from his right foot. The visitors were charging down the wing early in the opening stages and found some joy when Barry Rose broke through and made a run on goal but the on form Mac Cumhaill’s defence, particularly a good performance from Gerard Grindle shut down the attack and the effort went wide.

Mac Cumhaills found the back of the visitors net on the 11 minutes mark when Darren O’Leary was able to hold off his marker and slot the ball past Lee Mc Brearty in the St. Naul’s goals following great work by Barney Lafferty and O’Leary followed up with his first point from play a minute later to race into a 5 point lead. Barney Lafferty was supplier once again when he fed the ball to Darren McGowan who pointed over after making a direct and well-timed run. The on-fire Stephen Mulligan who couldn’t do wrong all afternoon had his fifth point from play shortly after 20 minutes of play.

Buoyed with confidence Mac Cumhaills were pushing on all over the field and Steven O’Reilly won a ball in midfield and offloaded it to Gary Wilson who pinpointed Darren O’Leary who netted his second goal of the game and the lead was now 10 points. Stephen Griffin pointed for the visitors on the 25 minute mark, which was their first point from play and Daniel Brennan added another in favour of the visitors soon after. St. Nauls had a chance to add another point from a free on the 20 m line soon after but Griffin, who was accurate to this point on frees, had his effort drop short and Mac Cumhaill’s ‘keeper Chris Patton played the ball out to his back line.

The visitors opened the scoring in the second half through Stephen Griffin once again but Mulligan sent the ball between the posts after fine work by Barney Lafferty once again and followed up with his seventh point soon after with a run down the right wing, turning his man and pointing over with his trusty left foot.

Another two Griffin frees took the visitors to 8 points but Darren O’Leary got his second point of the game and saw his free ping of the upright and back into the danger zone but after some good work by the Mac Cumhaill’s forwards they didn’t get anything out of it. O’Leary’s fine tally of 2.02 had to do him for the day as he was black carded soon after. Barney Lafferty who was supplier for many of the scores on the day converted a free to maintain the lead.

The Mac Cumhaill’s third goal came at the midway point of the half when Gary Dunnion was able to unleash a low powerful shot despite under pressure a good bit out from the nets to all but seal the game. The visitors were soon given a reprieve after a Mac Cumhaills man was deemed to have foot blocked a shot. Stephen Griffin stepped up and converted the penalty and the deficit was back to 9 points.