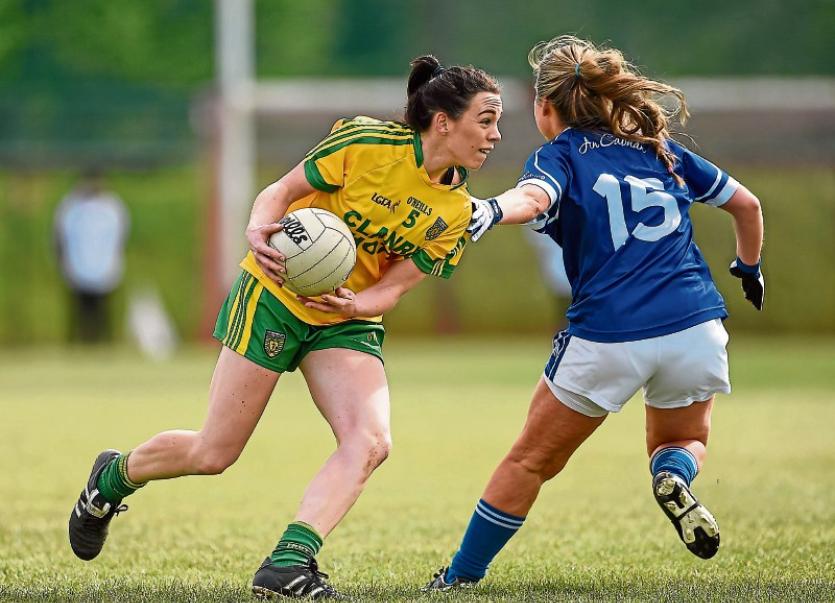 Donegal are getting down  to work this week in preparation for a second NFL Division 2 final following Saturday’s semi-final win over Cavan, in Beragh, Tyrone.

Geraldine McLaughlin once again shone bright up front for Donegal who stormed to victory in the second half after the sides traded ends level on 0-4 each.

On a day when she was well marshalled by the Cavan rearguard with sometimes two and other times three markers shadowing her, McLaughlin managed to register 0-8, with all but three of them from play.

Donegal will play Westmeath in the final on Saturday week in Parnell Park, in their second Division Two decider in-a-row. They lost last year's final to Armagh after an eight game unbeaten run to the final.

Only one team is promoted from Division Two which means, as Donegal found out last year against Armagh, it is winner takes all in the final with Westmeath.

Geraldine McLaughlin may have once again hit the headlines with her eight points, but this was an all round solid performance. The defence as a unit worked well where Deirdre Foley, Ciara Hegarty, Treasa Doherty and Emer Gallagher were the standout players.

Karen Guthrie and Katy Herron won some vital ball around midfield and tracked back to help out in defence when the need arose.

And that need arose especially in the first half when Cavan, with the wind in their favour, did carve openings and ask questions in attack.

Donegal, after Rosie Crowe opened the Cavan account with a point inside 15 seconds, hit the next two points to lead 0-2 to 0-1 after four minutes. McLaughlin raised the first Donegal flag after a minute and Grainne Houston landed the second shortly after when she cut in from the left wing for a superb score.

Houston, who missed last season’s league while away on her travels in  Australia, along with Niamh Hegarty, the team captain, and Yvonne McMonagle, all turned in big performances and were more than just support roles as they worked up and down the park.

With Donegal ahead by seven and time almost up, McMonagle dropped back and took balls out of defence as she thwarted a late Cavan surge.

After the early flurry and with defences on top, Cavan missed a glorious chance to put their stamp on the game when Aisling Doogan blasted wide from the penalty spot after Caitriona Sweeney was fouled by Nicole McLaughlin. The Donegal player came out worst in the collision and  required running repairs on the park.

They also had legimate enough claims for a penalty of their own early on too when Niamh Hegarty seemed to be impeded as she pulled the trigger. In fairness to the match official, Donegal did not protest too much.

The missed Cavan spot kick was a big turning point, though Doogan atoned shortly after with a fine point to edge the Breffni Blues into a 0-3 to 0-2 lead after 18 minutes.

McLaughlin and Grainne Houston  responded for Donegal with fine points and Roisin O’Keefe, deep in injury, ensured it was all aboard at 0-4 each at the interval.

Donna Enright hit the first point of the second period for a 0-5 to 0-4 Cavan lead. But the Breffni women only scored one more in the middle of the half  when Doogan converted from close in.

In between Donegal had taken a firm grip  and had posted five unanswered points courtesy of McLaughlin (3) - two 35 metre frees - and one each from Yvonne McMonagle and Amber Barrett.

McLaughlin made it 0-10 to 0-6 with her third converted free. Cavan huffed and puffed in the closing minutes, but McLaughlin, with two more specials and a super strike from Deirdre Foley, ensured it was going to be an eighth straight league win and Donegal’s day.