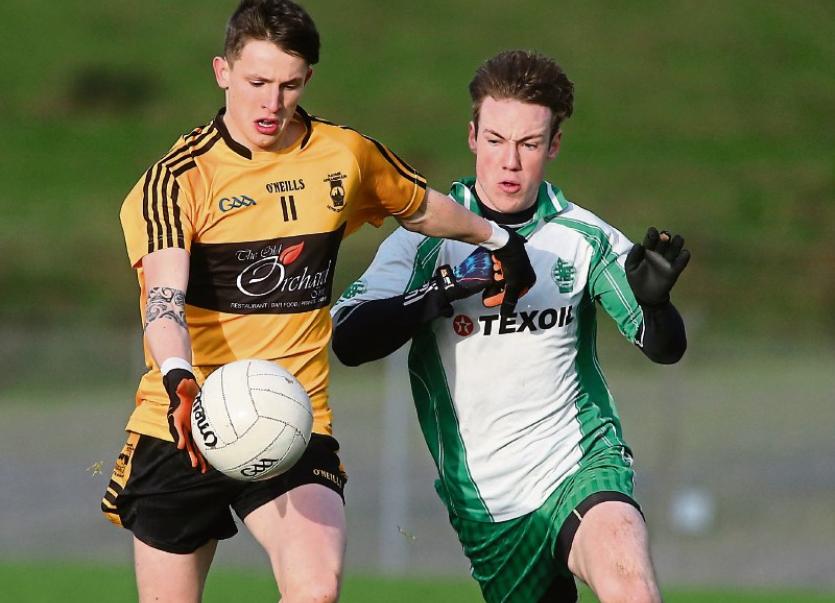 Aodh Ruadh, Ballyshannon are the only side in Division 3 with a 100 per cent start following their victory over Naomh Colmcille yesterday.

Elsewhere in this division, there were wins over the weekend for Naomh Ultan and Downings while Burt and Naomh Brid drew.

Aidan Duddy and Daniel Gallagher scored the goals that proved difference between Naomh Ultan and Letterkenny Gaels, in Dunkineely on Saturday evening.

Aodh Ruadh moved top of the division three table thanks in the main to a power-packed first half which allowed the hosts to trade punches with Naomh Colmcille over the second 30 while still remaining comfortably ahead, writes John Hughes.

The Ernesiders started the game in fine style with Peter Boyle swinging over a superb free from long range. Then two minutes later Seamus Kane took the ball off Michael 'Sticky' Ward and wrapped the left boot around a splendid effort from 30 metres to double the advantage. Ballyshannon were bossing the kick out early on and when Johnny Gethins won Naomh Colmcille's restart for the third time in a row and fed Philip Patton to nick over from the right the visitors were reeling.

They finally got off the mark after seven minutes when Eddie Gillespie tapped over a close range free, but Aodh Ruadh continued to dictate.

They had a great goal chance shortly after, but David McGurrin's shot was well saved and Philip Patton's follow-up volley came back off the crossbar. The next score came on ten minutes when Michael Ward forced a great turnover which Paddy Gillespie gobbled up and passed to Colm Kelly who drove through the Newtowncunningham defence before laying off to David Dolan who lofted over from close range.

Two minutes later good work from Niall Harley and Conor Patton saw the ball worked forward and Sticky Ward on hand to power over from 35 metres. A brilliant point from the right wing by David Dolan as the game ticked into the second quarter saw Aodh Ruadh well in the ascendant and leading by 0-6 to 0-1.

With 17 minutes gone the first goal of the game arrived. It came courtesy of fine interlinking play between Niall Murray and Conor Patton before Patton flicked across the face of goal where David Dolan was unmarked and able to palm into the empty net. Three minutes later Seamus Kane fired over a superb shot from range to take the hosts up to 1-7 for the first 20 minutes.

Naomh Colmcille hit back two minutes later with a Joe Donaghy free, but that was immediately cancelled out by a David McGurrin free after David Dolan had shown great strength and bravery to come out well to win the ball, being fouled in the process.

Aodh Ruadh could have added a second goal two minutes before the break, but Dolan's shot was brilliantly saved by Marty Callaghan.

There was a goal coming through and it arrived at the other end of the pitch as Naomh Colmcille stitched together their best passing move of the game before Willie Gillespie slashed home an unstoppable finish.

That left it 1-8 to 1-2 at the break and with Newtowncunningham having the benefit of a considerable following breeze for the second half it was anyone's game. However it was the Ernesiders who made the first impression on the scoreboard of the new half, Philip Patton popping over after Colm Kelly advanced dangerously into the area. Patton added another close in effort two minutes later to give the hosts an eight point cushion to play with as Naomh Colmcille set about chasing the game in earnest.

That only started eight minutes in when Joe Donaghy sent over a free from 30 metres.

However that that was cancelled out shortly after when, again, David Dolan showed bravely for the ball and was fouled to give David McGurrin the opportunity to convert the placed ball. The game was just into the final quarter when McGurrin added another free after a bad tackle on Johnny Gethins as he closed in on goal. With Aodh Ruadh three goals to the good it looked all over bar the shouting.

Newtowncunningham refused to lie down though and the closing quarter was full of fraught football.

It was however, ornamented by a glorious Michael Lynch free which he sent over from fully 60 metres.

Naomh Colmcille were caught napping from the kick out though and Aodh Ruadh raced the ball up the pitch where the visitors were badly exposed, but McGurrin opted for the point. The Inishowen men added points from sub Paul McGill in the 52nd minute and Conor Grant two minutes later, but Aodh Ruadh regained their composure down the straight and saw out the win with conviction.

Letterkenny Gaels were the dominant side in the first half and deservedly led by a point 0-7 to 1-3, Duddy’s first half goal kept the locals in touch.

But there was no disputing who was the batter outfit in the second period as Naomh Ultan hit a goal and seven to the Letterkenny men’s three points. Gallagher’s goal the clinching score that sent last year’s Division Four champions on their way to their first win in the new surroundings in the higher division.

They drew with Naomh Colmcille and lost to Fanad Gaels and Urris. The defeat was Letterkenny Gaels third of their campaign and after last weekend’s good home win over Burt, this result will be seen as a setback at the Glebe. Letterkenny led 0-7 to 1-3 at half-time, Aidan Duddy the goal scorer.

Downings have the bragging rights this week following Friday evening’s four point win over the neighbours from across the Mulroy, Gaeil Fhanada, in Tria a Locha.

Gary McClafferty and Lorcan Connor scored the goals for Andy Connor’s that were much the better team throughout and thoroughly deserved the victory. The win moved Downings who are having a good start to the season to third place in the league table, behind Buncrana and Aodh Ruadh.

McClafferty and Connor contributed 2-10 between them. Full-forward McClafferty scored 1-5 and Connor who operated out of the right corner of the attack hit 1-4. Seamus Nanny Friel was scorer-in-chief for the locals. The centre half-forward ended the tie with 2-1.