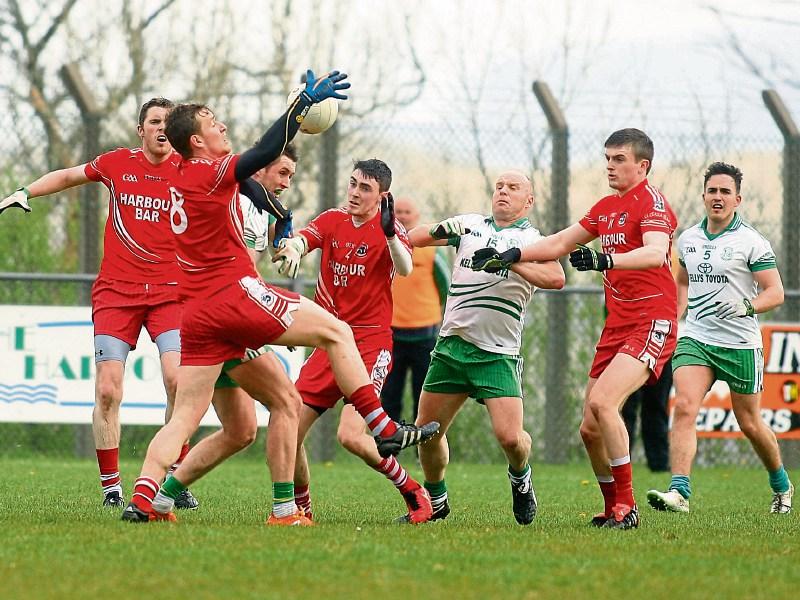 A somewhat understrength Killybegs side deservedly got the better of neighbours St Naul’s at Fintra yesterday.

The visitors, through Stephen Griffin, went into a promising 0-3 to 0-0 lead by the 10th minute.

But that was as good as it got as the home side, that were missing five regulars gradually reeled them in.

And three men played huge role in this swift turnaround. Killybegs midfielder Hugh McFadden was the “Michael Murphy” of his team in the first half, winning valuable possession and nailing three 50 metre frees.

Lively forward Evan Broderick brought the home side right back into matter with a real bang by hitting 1-1 in the space of two minutes to turn this encounter on its head in the 20th minute.

And in a very lean third quarter, veteran Padraig Gallagher bounced from the bench to hit three excellent points to close out matters for the Fishermen.

Also, the wind dropped significantly in the second half as Killybegs dug deep with Eoin and John Ban Gallagher starring in the engine room.

After Griffin's three points, McFadden got the home side off the mark with a converted free in the 11th minute and he followed this up with two more long- range efforts to level mattes at 0-3 each by the 18th minute.

But the match changed dramatically in the 20th minute when 18 year-old Evan Broderick found the net, placing the ball low under the diving body of Naul’s keeper Lee McBrearty.

Broderick’s goal came just 60 seconds after he arrowed over a fine point.

Stephen Griffin replied with another point for the losers, but McFadden was also on target for Killybegs, who deservedly led by 1-6 to 0-4 at the break.

The opening quarter of the second half saw a scoring famine with the wind dropping and Killybegs determined to leak no goals.

Killybegs keeper Martin made a brilliant save from Naul’s full-forward Brennan before Griffin and Rose narrowed the gap with two snap points to leave Killybegs leading by 1-7 to 0-6 by the 48th minute.

Stephen Griffin had the last pointed free, but there was never any real doubt about the outcome.

This was a deserved win for Killybegs who will have a stronger hand when they face Milford next week.

St Naul’s only played in patches and relied heavily on Stephen Griffin, but will also be a stronger force when their missing regulars return.