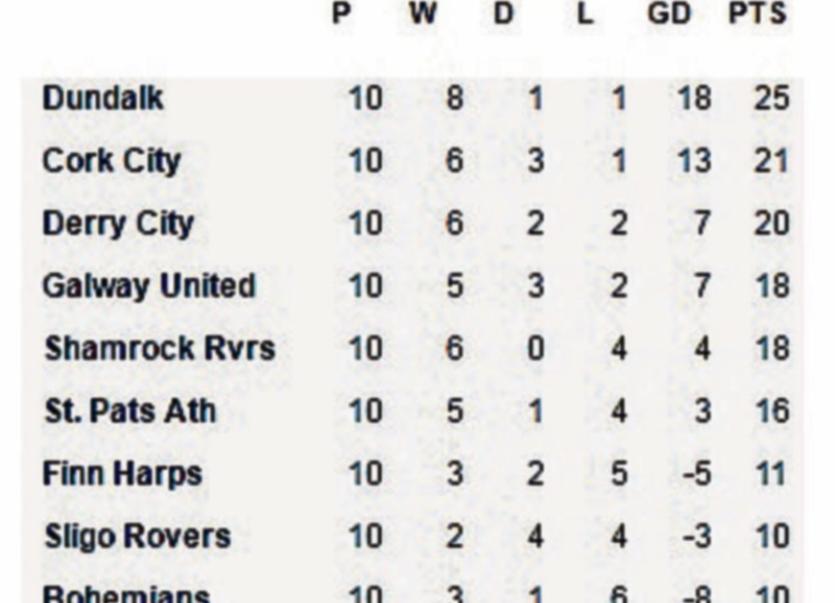 A penalty by Ryan Curran on 35 minutes was instrumental in Finn Harps securing a vital away point in the SSE Airtricity Premier Division in Ferrycarrig Park on Friday night.

The goal gave Harps a lead, which they held until half-time, but Wexford got what proved to be the only other goal of the game early in the second half. But overall, the Twin Towns side will be very happy to have secured something from their long trip to the South East.

Coming immediately after the long trip to Cork last week, Harps can be very happy to have got a share of the spoils and Finn Harps No. 2, Gavin Dykes, expressed the opinion that Harps might have deserved all three points on the night.

"We started really well but we didn't take our chances and if you don't take your chances in this league, it bounces back, but in fairness to Wexford we knew they would come back at us in the second half.

"But in fairness but for a ten minute spell when we were sloppy and conceded a goal, I felt we were the better side in the second half.

"When we are disappointed coming out of Wexford with a point, then we are doing something right," said Dykes, who was very happy to have Barry Molloy back on the field for Harps.

"Barry is going to be a very important player for us. It was his first game back since the Derry game," said Dykes, who was also happy that Mickey Funston was back. "He could have got a goal for us from a header near the end. But we have a very honest bunch of lads and for part-time footballers, we have been in Cork last week and in Wexford this week. It is a huge commitment," said Dykes.

The win keeps Harps in 7th place in the league table while Wexford stay in the bottom two alongside Longford Town.

Curran's goal, his fourth of the season for Finn Harps, came in the 24th minute. The former Derry City man was involved in the build-up, drawing a foul after running on to a Tony McNamee throw-in.

From the spot Curran fired past Graham Doyle in the Wexford goal.

Harps welcomed Ciaran Gallagher back into their starting side for his first League start since the opening night of the season.

Keith Cowan and McNamee returned to the side and there was also starting place to for winger Liam Flatley.

Adam Hanlon and Davy Cowan were off target early on while Damien McNulty almost doubld the Harps lead early in the second half.

But, as Gavin Dykes said, a little sloppiness allowed Wexford in for an equaliser seven minutes into the second half. Mulligan ran on to a Murphy pass and his shot found the net under the diving Gallagher.

Barry Molloy was introduced by Harps in the second half and he made an immediate impact creating a chance for Curran. Just before the end Packie Mailey had to make a goalline clearance to deny Murphy and make sure Harps got what they deserved.

"Hopefully now we can push on. We have a big game next week, Bohs at home and we are looking forward to it," said Dykes, who commended the players on the commitment involved in going to Cork and Wexford and returning home after each game. "Our lads have to go work," said Dykes, who said the recovery between those games makes it very difficult.

"They are a really, really great bunch and we are getting the maximum out of them,” said Dykes.