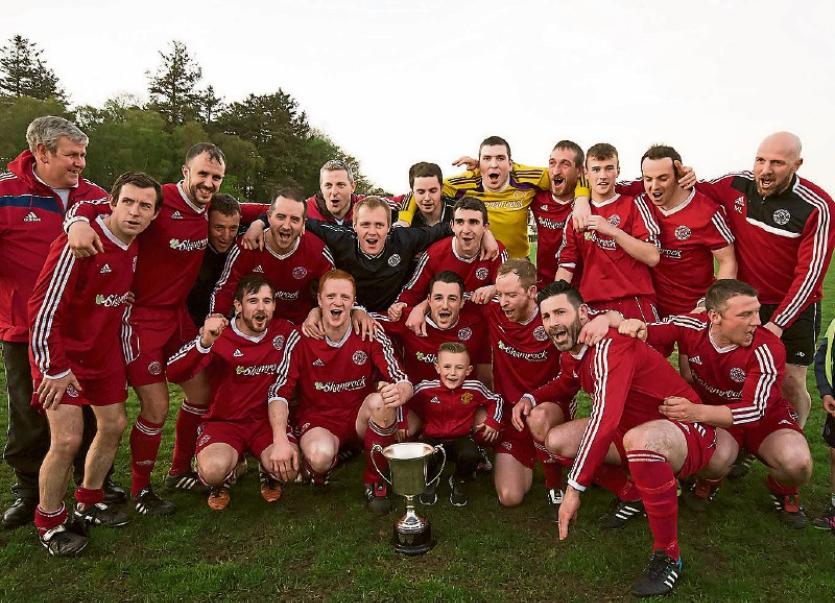 Philip Whyte and Ray Quinn scored the goals for the new champions as they twice came from behind against relegation-threatened Gweedore Celtic who belied their lowly position with a top class performance.

But Friday night was all about Drumoghill and reaching the magical 35 points they needed to be out of reach of second placed Milford United with a game still to play.

Veteran Whyte levelled for the first time for Michael Lynch’s side when he nodded home a Benny Bonner cross from five yards after Michael McKelvey, in the Gweedore goals, was caught flat footed on his line.

That was on 42 minutes and cancelled out Tomás Diver’s strike for the men from the Gaeltacht 13 minutes earlier.

Diver dived low between two Drumoghill defenders to head home a Colin Ferry cross from out on the left wing. Ferry had been troubling the locals from the off down the left wing and the alarm bells were ringing around the Moss from very early. Ferry went close to winning a penalty on 15 minutes and created at least one more scoring opportunity in the opening 20 minutes. Jimmy Boyle drew a good save from Paul McCauley and Diver also drove over McCauley’s bar.

The goal when it came was no more than Hughie Rua Gallagher's side deserved. After weathering early Drumoghill pressure, they settled into the tie and with Ferry carving openings on the wing, there was no great surprise when Diver beat McCauley.

A Liam O’Donnell strike from a distance was Drumoghill’s only shot on target in the opening 21 minutes.

Drumoghill bucked up after Diver’s goal and Liam O’Donnell and Pajo Rafferty shaved the outside of McKelvey’s post, before Whyte equalised, to leave it 1-1 at halftime.

Tomás Diver was in party pooper mood again sixminutes into the new half when he produced a superb finish to drill under the advancing McCauley after good approach by Declan Doherty and Jimmy Boyle.

Drumoghill turned on the heat again and with Gweedore retreating into defence Ritchie Moore and Rafferty went close to equalising before Ray Quinn popped up to net their second on 79 minutes.

Quinn drove home a Chris Malseed knock down from another precision cross from Benny Bonner.

Quinn’s strike proved to be enough and the last real goal chance for either side before Marty Quinn called a halt five minutes into a additional time.