A proud night for George 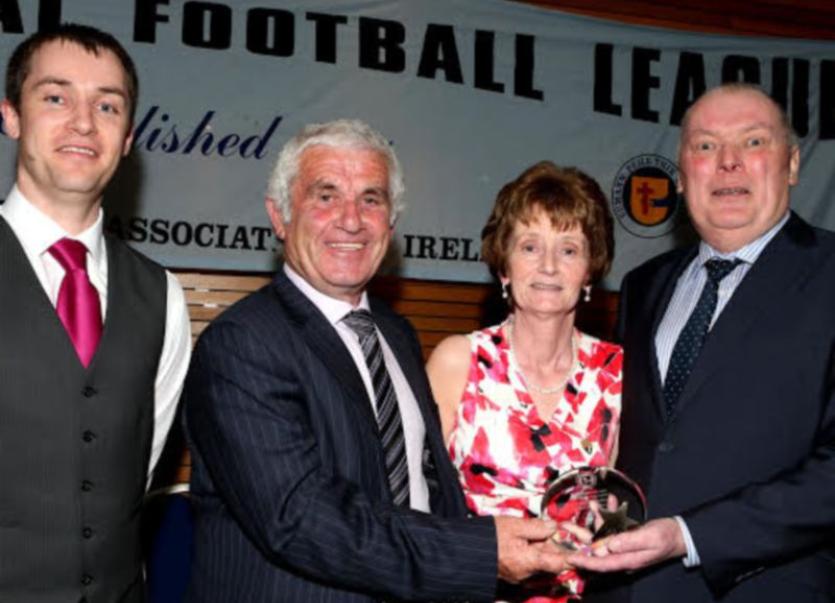 George McMullin is a unique breed in the world of football in Donegal.

He’s been secretary, treasurer and had a host of other roles and responsibilities with his club Dunkineely Celtic.

He’s offered his time and energy for various positions at executive level within the Donegal League.

He’s lined pitches, organised teams, and even spent a few years on the committee at his hometown club, Donegal Town FC.

“It’s just one of those things,” George said this week.

“But I’ve always loved the game. I’ve always had an interest in helping to run clubs and doing my bit at administrative level. That’s what I enjoy the most, doing bits and pieces for the club when I can.”

‘Bits and pieces’ is definitely an understatement. Such has been George’s contribution to the game in Donegal that at the recent Donegal League presentation celebrations, he was honoured with a Lifetime Achievement award.

It’s the first time ever that such an award has been presented by the league. Kieran O’Donnell of Drumoghill FC was also a well deserved recipient on the night.

“It came as a complete surprise,” George said.

“I think what made it all the more special was that this was something done by the league and the clubs themselves. I wasn’t nominated by Dunkineely or anything like that. It was the clubs who decided on it and that’s something I’m really humbled by.”

It was a proud night for George who was accompanied at the presentations by his wife Eileen and son John.

And it was nice to have something to celebrate after a difficult time of late for the family. George has been receiving treatment for lung cancer and pointed out that he doesn’t find it as easy to do everyday things as he used to.

“I’m hopeful that the treatment can give me a bit of respite,” he said.

“It’s been hard, but I have to say, I have been lucky to have received such tremendous support from my family and my friends.

“People are very good and they’re always asking how you’re getting on and how you’re doing.”

He recently took a step back from some of his responsibilities within the game, but his work when he was treasurer of the Donegal League was lauded at the recent Annual General Meeting where delegates were told that George had left the league on a sound financial footing.

Just to underline that point, it emerged that one of the league’s applications for Lotto funding was turned down because they had too much money.

“Did you ever hear the like of it?” George quipped. “I’ve never heard of anyone getting turned down because they’d too much money.

“That funding was for the work on the new pitch at Ballyare and I’m delighted that the league has decided to go ahead with that work.

“It’s the league’s own ground and it needs to have a pitch that’s top quality and playable all year round.”

He might be taking things a wee bit easier these days, but George said he’s still trying to keep busy. He’s enjoying the Euros, even if he wasn’t too impressed with Ireland’s performance against Belgium at the weekend.

He’s looking forward to his only grandchild, Sophia’s second birthday next weekend in Breenagh, Glenswilly. She’s a daughter of George and Eileen’s son John, who plays in goal with Dunkineely. They also have two daughters, Cathy, in Limerick, and Mairead in Glasgow.

And of course there’s his beloved Dunkineely Celtic FC.

“They’ve dropped down in the pecking order a wee bit in the Donegal League,” he said.

“It’s not easy when you have players who are injured and then emigration kicks in.

“But we’ve a very good underage structure and a lot of great work being done with those players. That’s so important in our club.

“Hopefully, with those players coming through, our teams and the club will benefit in the long run.”