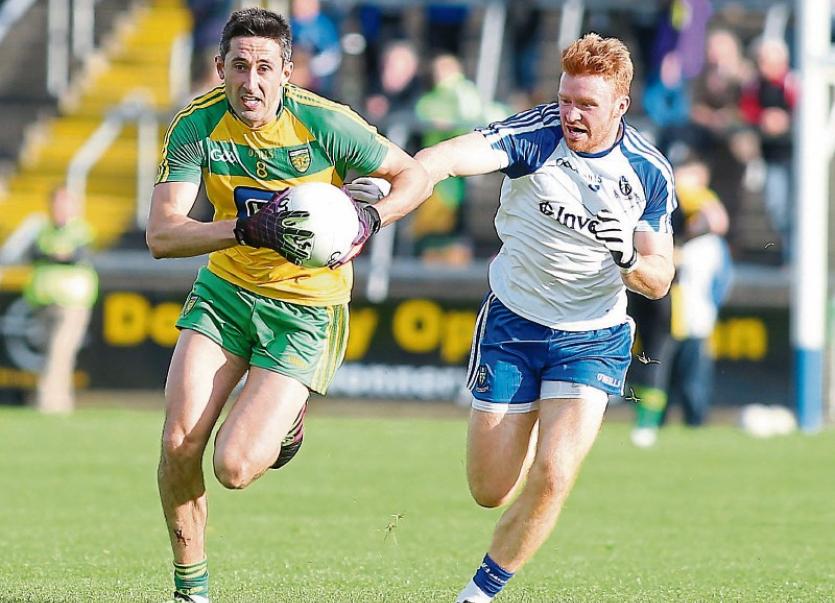 Frank McGlynn was obviously delighted to have qualified for another Ulster final and a showdown with either Tyrone or Cavan.

For the double All-Star defender it was also pleasing to have overcome their arch rivals Monaghan, who had the better of the majority of most recent meetings between the two.

The Glenfin legend was also especially pleased that almost all of the injuries had cleared up and the team seemed to be coming together at the right time.

He was also especially pleased that the young and older members of the squad were working well together.

“For the first time all year we had a clean bill of health this week and apart from Neil Gallagher, who was not fit to train, we had everybody else which is a good sign,” said McGlynn.

“It is a good time of the year to have everybody fit and fresh and I know a lot of people saying we are over the hill.

“But a lot of the senior players are stepping up to the mark at those crucial moments when penalties go in and goals are scored and then the younger lads have the legs to finish off the job.”

The versatile McGlynn, who turned in another top class performance in his new role as playmaker, feels that the two games with Monaghan will have been a great experience for the younger lads in the squad.

“In fairness to the young lads they are not new to the game. They played in big games for the minors and the U-21s so they are used to it.

“But last week’s game brought them on and hopefully this weekend’s game will bring them on even more.”

He also felt that over the last two games despite being reduced to 14 players that Donegal and the older members of the team well and truly dispelled the notion that Donegal are an ageing team.

“But we responded in the second half in a good fashion and last week, too, there were hard questions asked and we responded which shows the hunger that we have for another Ulster title,” said the Glenfin man.

After getting off to a flying start and going 0-5 to 0-0 up, Frank was disappointed that they had turned off on a couple of occasions in the second quarter and left the door open for Monaghan.

“Being ahead at half-time is always a good position to be in and it was score for score for a while in the second half and then we pulled away.

“We knew it was important to keep the two point cushion in the second half. We knew it was going to be key. We knew that there was not much of a goal threat apart from the times we switched off ourselves.

“We felt at half-time if we matched them score for score in the second half that we would get their in the end,” concluded McGlynn.