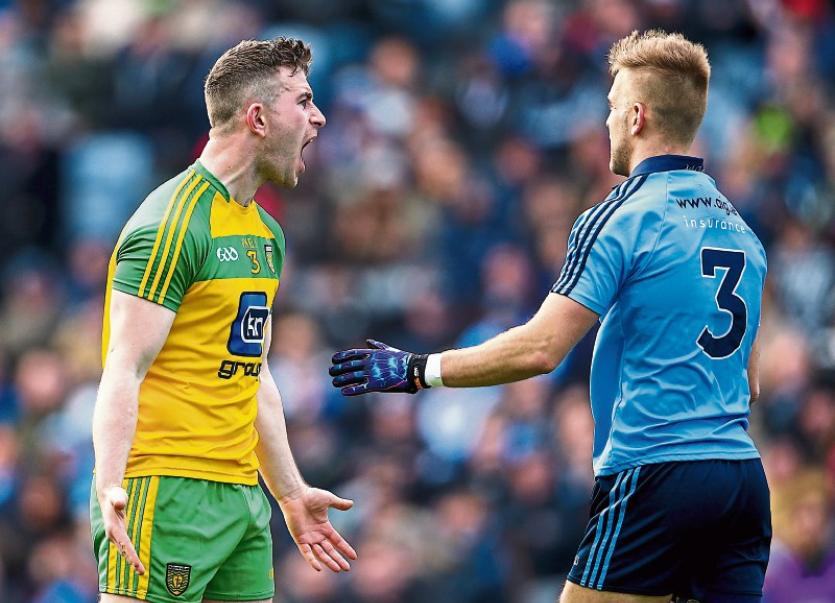 Michael Murphy saluted the performance of his colleague Patrick McBrearty against Cork last Saturday and spoke of the confidence the corner forward’s display has brought to the Donegal team.

Speaking at a press conference held yesterday in the Abbey Hotel, Donegal Town ahead of this weekend’s quarter-final against Dublin, Murphy praised McBrearty’s form and the record-breaking 11 individual scores he fired against Cork in last weekend’s qualifier.

“It was a phenomenal performance from Patrick,” the captain said.

“I did say after the weekend he’s always had it in his locker to do it. The speed, the power and the skill that he has is second to none and I wouldn’t swap him for the world.

“It’s confidence for the team and for the players. The quarter-final presents itself now as a full-house in Croke Park and a huge stage that every player, both Donegal and Dublin, will have dreamt of since they were young.

“They will be mad to play in it and put their best foot forward for themselves, but more importantly, for their county.”

While Michael McLoone of the 1966 side and Seamus Bonnar of the 1974 side jointly hold the record for highest score in a single game, Patrick McBrearty’s 11 points on Saturday was the highest number of individual scores ever recorded by a Donegal player in one match. Repeating this tally is a feat which Murphy believes will positively influence McBrearty.

“The opposition will look at it and there’ll be a certain amount of pressure but I think the personality Patrick has will leave him in very good stead,” he said.

“He loves playing football and it won’t take a pinch out of him. We all know that we need to give him and ourselves opportunities to put our best foot forward against Dublin.”

A former student of Dublin City University, Murphy is no stranger to some of Dublin’s most prominent players, most notably half-forward Paul Flynn. Despite the friendships he may have formed during his time in the capital, the Glenswilly man is certain that comraderies will be set aside for the duration of Saturday’s clash.

“He (Flynn) will be mad for Dublin to win, likewise I’ll be mad for Donegal to win. We’ll be putting any friendships aside for those 70 or 80 minutes.

“I shared with him for four years, we did the same course and we studied together. Johnny Cooper and Paddy Andrews were there, so were Philly McMahon and James McCarthy – there was a good lot of players around,” he said.

Murphy drew comparisons between county footballers throughout the country and pointed out that while the public speculate on what players are like personally, at the core of the Dublin players he’s familiar with are a good group of people, both inside and outside the white lines.

“I would have crossed paths with a few of them in around DCU and UCD when we were playing Sigerson and they’re all good lads.

“You have a thing when you’re in a county, you be looking around other counties and thinking that their players are strung differently and what makes them tick is different, but college gives you an opportunity to know them,” said Murphy.

“Summer is difficult, you’re so strung in training and preparation that you maybe don’t (be in contact) but over the winter and league period you make a phone call and have a chat. Flynn would be one in contact quite a bit having spent four years together, but they’re all good lads and they’re all very successful.

“They’re motivated in all their lives, in football and off the field,” he added.