Donegal did themselves proud 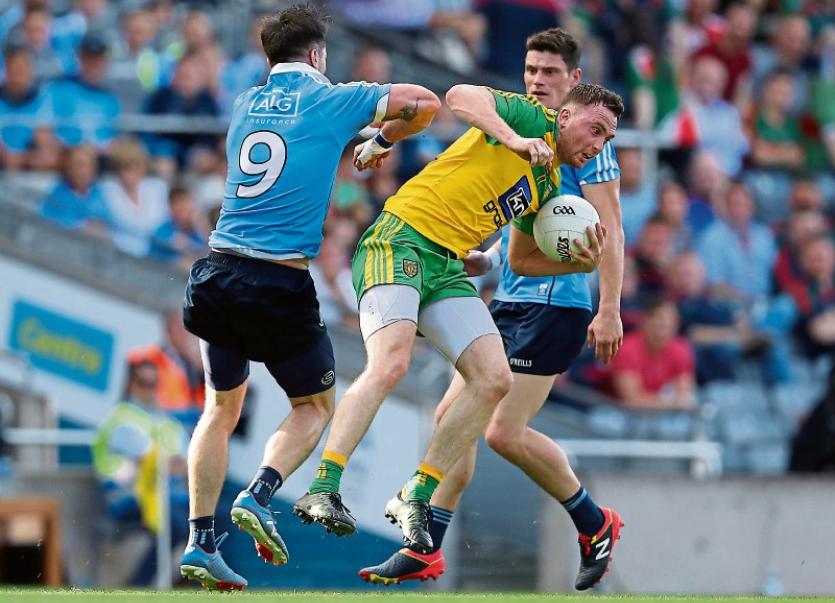 You've got to give Donegal a lot of credit, despite their defeat to Dublin on Saturday.

Their 'never say die' approach was brilliant to see and I think Donegal fans were happy that their team simply refused to roll over and die against the Dublin machine.

Mind you, in the opening stages of the game, there were moments of concern. Dublin could have had two goals in the opening 12 minutes. Mark Anthony McGinley made a fine stop in the opening minute and spread himself well to help deny Dublin a second goal chance.

At that stage, Dublin were scything through us at every opportunity. We just couldn't get to grips with them and they seemed able to punch holes in the half back line with ease.

At half time, I was worried. We were five points down and it didn't look good when Dublin scored the first two points of the second half.

But we got a point back through Patrick McBrearty and then we got the goal. There was no better man than Ryan McHugh to finish it off. I thought he was superb again and was my man of the match. He was here, there and everywhere. He got the goal and then they had a man sent off when Connolly got the second yellow.

At that stage, there was a chink of light for us.

We were three points down, but we just weren't able to get any closer to Dublin than that.

I think if we could have got to within two points, we might have been able to kick on. But in fairness to Dublin, they are a quality side and they were able to respond with scores of their own.

There were many who thought we'd get hammered by Dublin, but this Donegal team showed what they're about. They gave us another good year, although, it's worth noting that Donegal really missed the presence of big Neil Gallagher this year. He brings such strength and a real physical presence to our midfield.

Colm McFadden announced after the game that he is retiring from inter-county football. I remember managing a young Colm and recall him scoring 1-7 in an Ulster semi-final against Tyrone.

His contribution to the county has been immense and his scoring record speaks for itself.

There are others who might be thinking about retiring too. I would urge them not to rush into any decisions. They should take their time before deciding what to do.

And for Donegal fans, the summer's not over just yet. Our Minors have an All Ireland semi-final to look forward to now and they deserve all our support ahead of what's another massive game for the county.