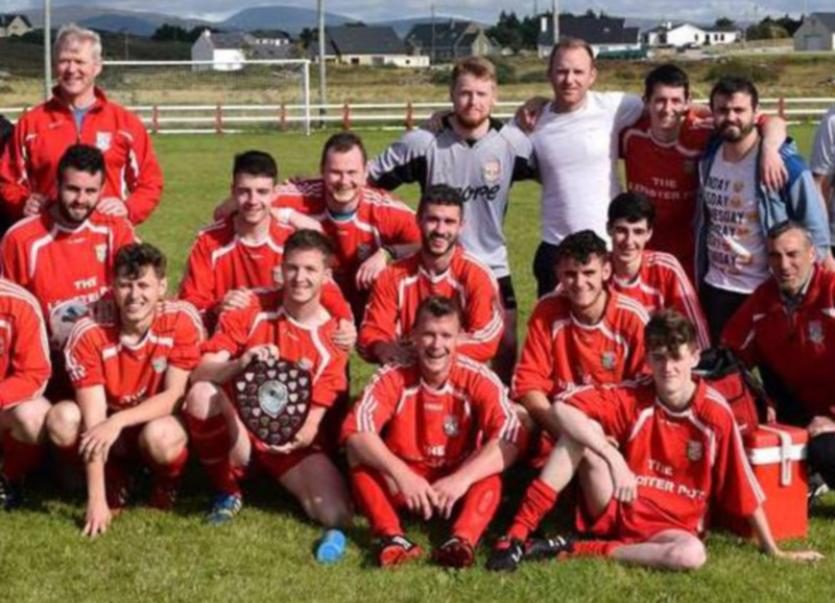 In perfect conditions in Central Park, Keadue, it was the home side who came out on top in the Brian McCormick Gweedore Area Shield Final.

Both sides have shown good early season form to make it through to the area final and that was clearly evident in a bright opening by both sides.

Chances were few and far between however. Indeed it wasn’t until 37 minutes that the first real clear cut chance came. A through ball managed to find its way through the heart of the Keadue defence and the lively Ciaran McFadden was alert to drill home expertly and give the visitors the lead.

As the clock ticked into injury time in the first half Keadue found themselves level when a speculative shot from Eoin Redmond found its way into the bottom corner leaving the sides level at half time.

The visitors started the second half very brightly and took the lead again on 49 minutes with Michael Barry scoring with a fine header from a corner.

As the second half progressed Keadue began to commit more men forward in search of an equaliser with Cory Gallagher and Daniel Bonner both going close.

Just when it looked like Gweedore Utd were heading for victory a late Keadue corner was brilliantly headed home by Cory Gallagher to bring the tie to extra-time.

In the bright sunshine both sides tired in extra time with chances few and far between.

And so to penalties where Keadue captain Chris Greene stroked home the winning penalty for Keadue to bring the first piece of silverware of the season to Central Park.

Both sides will be very encouraged by their all-round team performances in what was a highly competitive and entertaining game.