CHAMPIONS DRUMOGHILL OPEN WITH A VICTORY 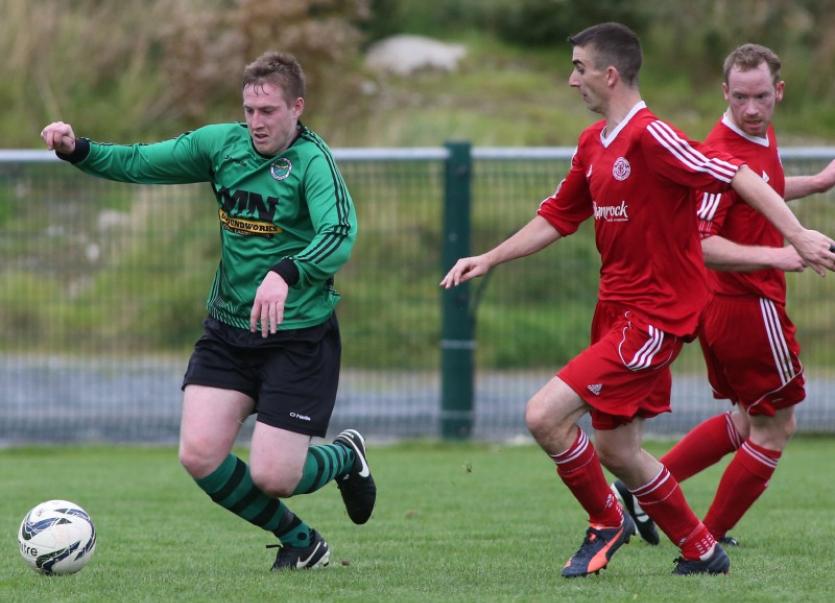 Drumoghill FC got their league campaign off to a winning start when they got the better of Glenea United at The Moss on Sunday.

It was the perfect start for the reigning Brian McCormick Sports Premier Division champions as the first round of league games were played.

Rathmullan Celtic were the top scorers in the Premier when they beat Lagan Harps 4-0.

In Division One, newly promoted Erne Wanderers opened with a 4-0 win over Keadue Rovers.

Donegal Town hit three in an impressive away win at Glenree United.

A Ritchie Moore brace ensured that Drumoghill got their bid to retain their Premier Division crown off to the perfect start.

Moore struck in each half to secure victory.

Glenea United, however, will feel that they could have got something from a game that was in the balance until Moore got the second of his goals in the 78th minute.

Just a few minutes before Moore’s second, Ryan McFadden thought he had equalised direct from an in-swinging corner, only to see his effort land on the crossbar.

Drumoghill had taken the lead on 30 minutes through that man Moore. There seemed little danger when his speculative effort somehow evaded the dive of Joe Coll.

Castlefinn and Convoy played out an entertaining scoreless draw in Castlefin on Sunday. In the opening exchanges the home side started on the front foot and Stephen Roulston went close from the edge of the box. In the 20th minute Convoy created the first clear cut chance of the game when Eunan Kelly broke down the left and his shot was tipped on to crossbar by Castlefinn keeper Anthony Sweeney.

In the 35th minute Raymond Foy had the host’s best opportunity of the half when he broke from midfield but his shot was well saved by visiting keeper Chris O'Donnell.

In the second half both sides had numerous chances to grab a winner, firstly JP Malley shot wide from close range after 55 minutes. The visitors were always threating on the break and Mark Harvey had an effort from 6 yards that somehow went wide.

In the 85th minute the hosts had the best chance to win it when Barry Tourish stabbed wide from 6 yards. Best for Castlefinn: Anthony Sweeney and PJ McMenamin. Best for Convoy: Chris O'Donnell and Paul O'Leary.

A youthful St Catherines team were hosts to an experienced Kilmacrennan side in Emerald Park .

This experience showed in front of goal as Timmy Burke struck low past Michael Mullin in the 7th minute to give his team an early and deserved lead.

St Catherines found it hard to deal with the opposition's slick passing and in the 18th minute Christopher Dillon fired the visitors 2-0 in front.

In the second half Stevie Anderson moved back into the centre of defence to allow Sean Gorrelle to move further forward in search of goals. This move gave the Saints more options going forward but the goal eluded them with Stephen Leslie coming closest, striking the crossbar from distance.

Milford started better and created a few chances and finally took the lead after 35 minutes through Jonny Logue.

Kildrum started the second half strongly and had a great chance to level through Curtis but Mc Gettigan saved well.

Kildrum levelled through Melly on 55minutes.

Kildrum had a couple of great chances to win the game through Curtis and Clarke.

The home side started best with some lovely passing football. They opened the scoring on 39 minutes when Tommy Diver threaded the ball through to Kyran Glennon who converted.

Raphoe equalised soon after when the ball fell to Jamie Gallagher after a goalmouth scramble.

Padraig Gallagher almost put the home side in the lead just before half-time when his shot cannoned off the crossbar.

In the 2nd half Tommy Diver got his second assist when his free kick was headed in by Ciaran Ferry.

A new campaign in a new league for the home side started in Glenree Park with Donegal putting a dampner on it when they took all three points back through the Gap.

They took the lead through David Graham in the 38th minute when he latched onto a through ball and rifled it past the keeper.

He then made it two on 68 minutes.

Martin Cullen entered the game and brought a good save out of the visiting keeper after a good run down the wing. But the game was finished off by Graham in the 80th minute when he lost his marker and headed the ball into the top corner.

The home side took time to get going and Rovers held out to halftime.

The first goal came on 52 minutes when Ryan O'Brien played a lovely ball over the top for Micky Bowering to run onto and he made no mistake from 8 yards out.

The second came four minutes later when David Dorrian finished from 6 yards out when the ball fell kindly to him.

Erne were now attacking at will and creating numerous chances and the scoreline would have been much higher only for the Keadue keeper making several outstanding saves.

The third came on 76 minutes when Seamus Kane finished well into the top corner from an acute angle to make amends for his penalty miss a few minutes earlier.

The fourth came with the last kick of the game when Michael Sticky Ward squared for Diarmuid Mc Inerny to tap home from 6 yards.

A good start for Wanderers in what will be a though division for them this year with a good all round display albeit against an understrength Rovers who had their keeper as man of the match.

Ballybofey enter this season with strong ambitions for promotion and went away from Tymeen with all three points on the opening weekend.

Damian Glackin broke the deadlock for the visitors when he tapped home from close range on 35 minutes to give Ballybofey a 1-0 lead at the interval.

Ballybofey got a great start to the second half when Mark Griffin slotted home from inside the box after he ran from his own half. Griffin scored his second on 50 minutes with a fine left foot effort from the edge of the box.

A good entertaining game at Eany Park to start the season saw the home side come out on top with a hat-trick from Paul Mc Groarty.

It was the visitors that started brightest in this game and it was on the half hour they made the good work count. Following a good move, Lee Doherty found space in the Eany box and scored the opening goal.

A determined Eany side came out for the second half and with only 10 minutes gone Paul McGroarty got the first of his three from a free kick.

With Eany pushing for the lead the visitors scored again when Paul Patton was given space outside the box to shoot.

Eany came back into the game and went close on several occasions but the breakthrough came in the 75th minute and it was Mc Groarty again to pull Eany back level.

The home side hit the lead in the 80th minute when Stephen Griffin was taken down in the box. Paul Mc Groarty took the resultant penalty and completed his hat-trick.

The home defence held out for the last ten minutes to collect the three points.

Both teams played some great football and it was an evenly contested match with the scoreline a bit harsh on the '71. Both keepers were on top in the first half pulling off great saves, first with Dillon Early saving from Cathal Martin at point blank range and then Shane Sandilands did well to tip a Marcus O' Donnell effort over the bar.

Donal Callaghan should have put Kerrykeel in front on 35 minutes when he failed to convert a Conor Mc Fadden cross.

Lifford converted on the 74th minute when Conor Carlin finished off a great ball from Marcus O' Donnell. Kerrykeel pushed for the equaliser and had good chances from Paul Gibbons and Conor Mc Fadden but Dillon Early proved hard to beat.

Michael Mc Devitt's free in the 80th minute was again tipped over the bar by Early.

Shane Sandilands kept the ‘71 in the game with a brilliant point blank save from Carlin.

The away side added two more in stoppage time to put the game out of sight, the first from Carlin after a slack back pass and Marcus O' Donnell with a header form a corner.

Whitestrand started the game off on the front foot and some good play led to Kevin Loughrey crossing to Shane Mc Glade who shot narrowly wide.

Cranford were always dangerous on the counter attack and had a shot that went narrowly past the post.

The second half started off with both teams having periods of good play and the breakthrough came oon 65 minutes when a cross came into the box and caused a scramble. The ball was eventually forced over the line by Brian McGinley.

Whitestrand pushed hard for an equaliser with a sustained period of pressure and it nearly came but the Cranford keeper produced a number of superb saves.