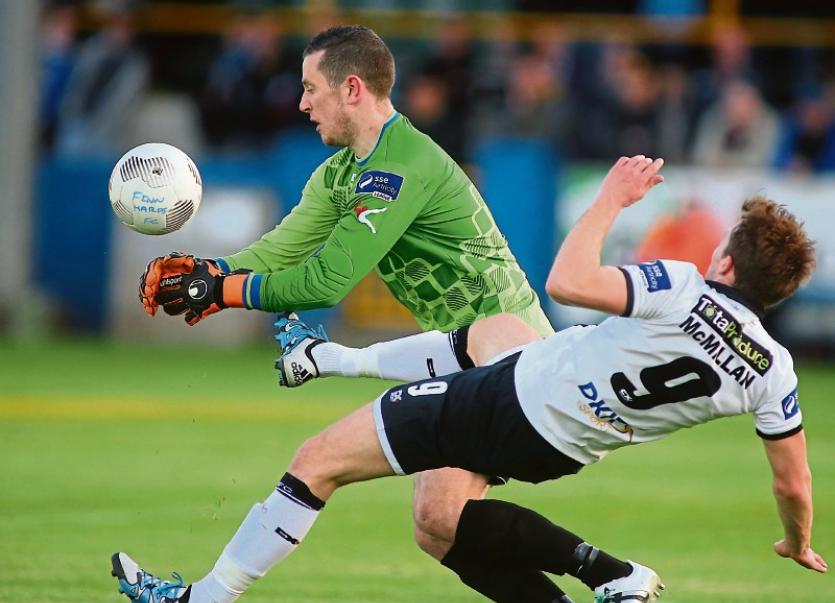 Goals from Patrick McEleney (6) and Daryl Horgan (75) gave Dundalk the points against Finn Harps at Oriel Park on Monday night.

For Harps, it’s a sixth league defeat on the trot but they put up a battling display against a Dundalk side who would have been expecting to win comfortably.

Stephen Kenny’s side went in front through McEleney after only six minutes and those Harps fans who made the trip to Oriel must have feared the worst.

But despite the home side dominating possession, Harps managed to hold until well into the second half when Horgan sealed the win with his team’s second.

Harps made the journey to Co. Louth without the suspended Ethan Boyle and the unavailable Barry Molloy while Sean Houston missed the game through injury.

Their 5-4-1 formation was undone just minutes in when McEleney, the former Derry City man, fired past Ciaran Gallagher.

The Harps keeper, in for Richard Brush, was busy in the first half and made a number of good saves. Then just before half time, he watched as Paddy Barrett’s header struck the crossbar.

Harps lost Ruairí Keating to injury early in the second half. The striker left the field on a stretcher and is now a major doubt for Friday night’s crucial visit of Longford Town.

Harps didn’t create very many chances over the 90 minutes. Keith Cowan’s header on the hour was easily saved by Rogers.

At the other end, Dundalk continued to push for a second and it eventually arrived when Horgan scored.

Mark Coyle, a member of the Finn Harps U19 side, came on for his senior debut while BJ Banda was also a late substitute.