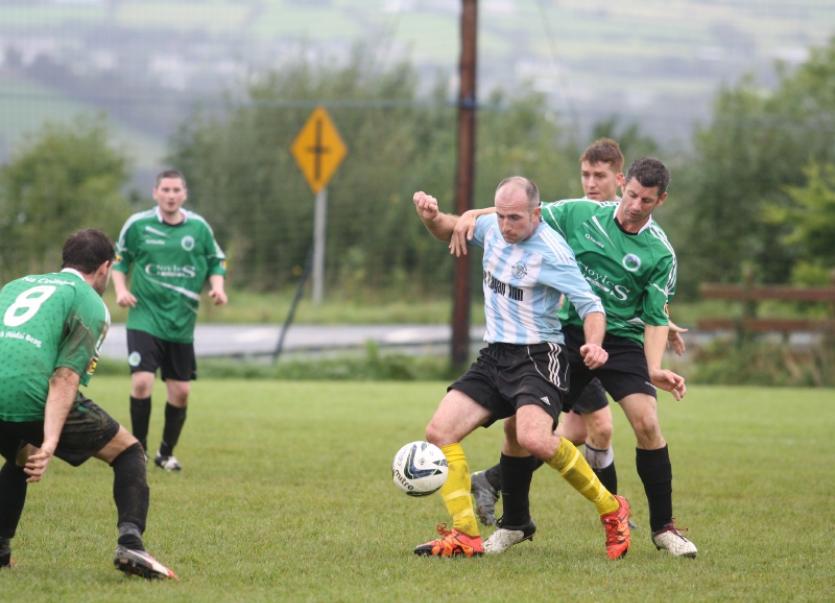 He was the top goalscorer in Division One last season, and on Sunday, Mark Hunter was back to his brilliant best as Lagan Harps saw off Gweedore Celtic in the FAI Junior Cup.

The striker bagged five goals in a 7-3 win to help the Premier Division side into the second round.

The scoreline might suggest a comfortable win for Keith Hegarty’s team, but this was far from a one-sided encounter.

Lagan were the better team, but Gweedore Celtic made them work hard for victory and with 25 minutes remaining, only trailed 3-2.

But eventually the Gaeltacht side just ran out of steam as Lagan upped the ante and cantered to a deserved win.

This tie pitted two sides who swapped places in the league at the end of last season with promoted Lagan Harps replacing relegated Gweedore Celtic in the top division.

The Orchard Park outfit lost their opening match in the Premier Division against Rathmullan Celtic but showed on Sunday that they have plenty of talent in their side and enough about them to cause a few problems for the more established teams in the division.

They certainly gave Gweedore Celtic plenty to worry about in the early stages of this cup tie with Kenny Doran, Hunter, Michéal Doherty and former Arranmore United frontman, Gavin McGlanaghy all going close.

Gweedore, for whom county star, Odhran MacNiallais was excellent in midfield, held out until McGlanaghy gave Lagan the lead on the stroke of half time.

Three minutes after the break, Hunter opened his account and by 51 minutes, he got his second and his team’s third.

But Gweedore hit back with Padraig Gallagher, one of their best players in this tie, rounding off a brilliant move to make it 3-1.

Just after the hour, substitute, Colin Ferry took advantage of a missed clearance by Lagan’s keeper, Damien McFadden, to score. Suddenly it was game on.

But by 66 minutes, Lagan made it 4-2 when Kenny Doran headed in Hunter’s near post corner.

Gweedore, who lost defender Ciaran Ferry to injury, tried to find another response but despite their best efforts, they would concede three more - all scored by Mark Hunter who showed his class in front of goal with some wonderful finishing.

MacNiallais and Gallagher combined to set up Colin Ferry for Gweedore’s third goal - but it was no more than consolation.