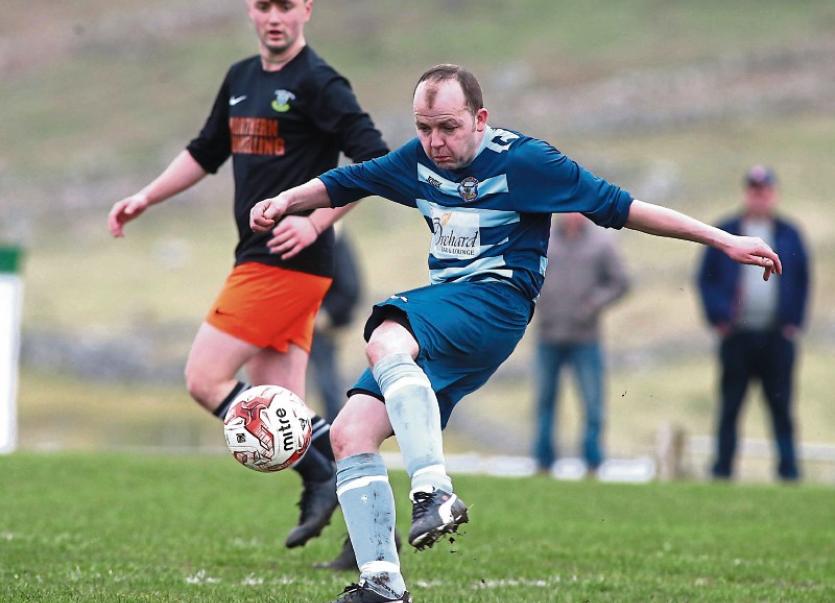 Glencar Celtic were the big winners in the Donegal League’s Glencar Inn Saturday Division at the weekend, defeating Dunlewey Celtic 5-1.

And there was a surprise in Fintown where the local Harps side got the better of champions Arranmore United, winning 1-0.

This game was played in perfect conditions at the Flag Pole Field. Glencar started brightest and broke the deadlock through a Garvan Grieve strike from the edge of the box after a good move.

Dunlewey hit back shortly afterwards and Mc Cafferty finished well after beating the offside trap. Their joy was short lived however as Glencar responded straight from the restart, they broke up-field and Grieve turned supplier when he back heeled for the inrushing Eddie McLaughlin whose sweet strike nestled in the top corner.

Glencar doubled their advantage shortly after. They won a corner and quick thinking from Eddie McLaughlin who swung the ball over while the Dunlewey defence were getting organised and Conor Gibbons had a free header in the 6 yard box to put Glencar 3-1 up at the break.

It was more of the same from Glencar in the second half with Grieve, Gibbons and Malseed playing some intricate football causing lots of problems for the Dunlewey defence. Kevin O’ Donnell's deliveries from corners were causing problems for the visitors and Conor Gibbons netted his 2nd of the game with another header to put Glencar 4-1 up and kill the game off as a contest.

The home side continued to press and got their reward when Joe Baker broke free and finished well low under the keeper.

The game was played in good conditions at Pairc Achla. Fintown started the brighter in the first ten minutes, creating a few chances for Aaron Boyle and Shan Mc Millan. The visitors started slow but came into the game with two good chances, one going over the bar and the other bringing a good save by Barry Mc Monagle.

The breakthrough came for Fintown late in the 1st half when Steven Boyle fired a low and powerful shot and the Arranmore keeper couldn't hold on to it. Arranmore upped the pressure in the 2nd half with Fintown weathering the storm.

On the counter attack Aaron Boyle scored for Fintown but the ref deemed it offside. Ten minutes later Arranmore had a good passage of play and found the net only to be ruled offside also.

Fintown came close on a few occasions before the final whistle arrived. Their keeper also produced a number of fine saves to keep them in the game.

Arranmore got a penalty late in the game but Barry Mc Monagle managed to save the kick and the points were secured for Fintown.

A crystal clear day was the backdrop for Saturday's game between Strand Rovers and Orchard at Strand Park. Both teams were clearly up for it as the game started at a quick pace. Orchard broke the deadlock however when Conor McDermott put away a goal after a quick counter attack eight minutes into the game.

Orchard capitalised on this and within two minutes they were two ahead when a ball sent from keeper Tony McLaughlin bounced over the head of Strand keeper Kevin McGovern and was nodded in by Michael Sweeney.

Strand refused to give up and kept attacking but once again Orchard scored, this time with a shot from outside the box from Kriss McLaughlin. The second half was a dogged affair with most of the play being in the middle of the pitch. Matthew O'Donnell for Strand came close to scoring with a great shot which the Orchard keeper did well to save.

Strand eventually were rewarded for their never say die attitude when Paddy Glackin put away a shot from close range on the 85th minute.

Castlefin and Milford played out an entertaining 1-1 draw on Saturday in Castlefin.

In the first half the hosts had the majority of the possession and had numerous chances to take the lead. Firstly in the 15th minute Keith Nelis broke clear and his shot came off the post with only the keeper to beat. The home side continued to press and Ronan Tourish broke clear but failed to beat the keeper.

Nelis then had a header that flew just wide after a James Mc Menamin cross. The second half began in the same fashion and Castlefin finally broke the deadlock when Ronan Tourish latched onto a long clearance to slot home with 60 minutes played.

A very open first half with Glenree only having ten players available and at times looking like they played with the extra man. Both sides created a few chance but the home side went in 1-0 up at the break after a great team effort finished off by Micheal Bowring.

Erne finally clicked in the second half with Aaron Fannon making it 2-0 and with Bowring adding two more goals to his first half finish the home side won comfortably 4-0.

An injury late on saw Glenree finish the game with nine players. Man of the Match performance from Bowring and a great team effort from Glenree who fought hard till the end.