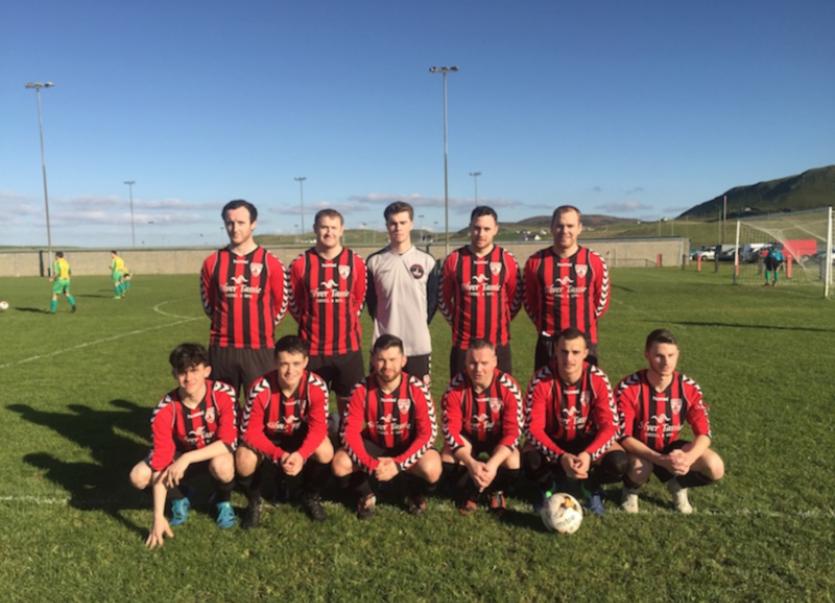 At Triagh-a-Locha, Francesco Crisco and Seamus Brown netted in a 2-1 win for Bonagee while Ronan ‘Olly’ Doherty bagged a hat-trick as Cockhill claimed a big 7-0 win at home.

Bonagee Utd. advanced to the national stage of the FAI Intermediate Cup after getting the better of Fanad United at Triagh-a-Locha.

Francesco Crisco and Seamus Brown bagged the goals for Peter Moran’s team, who just had enough firepower to see off the two-time Intermediate winners.

Fanad’s powers mightn’t be at their once-formiddable levels, but under Arthur Lynch they have lost none of their spirit and John McGarvey’s goal nine minutes from time gave the home side hope.

They couldn’t find a second way through to force extra-time and their cause wasn’t helped by the dismissal of Seamus ‘Coshia’ Friel just moments after his introduction.

For long periods it seemed as if the opening goal, by Italian Crisco on 42 minutes, might well have been decider.

Shane O’Doherty’s inch-perfect corner invited Crisco to have a go and he drilled a wonderful first-time effort across Shane Graham and into the far corner from 15 yards.

Their second arrived in the 80th minute and it, too, was a work of art, substitute Brown turning and hooking over ‘keeper Graham with the deftest of touches.

A minute later, McGarvey turned home from close range after getting on the end of a cross by Killian Gallagher and it was game on.

However, Fanad’s hopes of a comeback were dealt a blow when Friel was given his marching orders, handed a straight red card by referee Packie Coll for his part in an incident involving the Bonagee goalkeeper Gareth Wade.

Cockhill Celtic ran in seven second-half goals to inflict a heavy defeat on Swilly Rovers and advance in the FAI Intermediate Cup with Ronan ‘Olly’ Doherty netting a hat-trick.

Swilly were dealt an early blow when Jordan Toland had to be replaced through injury after just 23 minutes and a scrappy first half ended scoreless, although Mark Moran did riffle over late in the half.

Gavin Cullen’s half time team talk had immediate effect with Cockhill taking the lead in the first minute of the second half, Keddy's cross headed in at the far post by Doherty with only 23 seconds gone.

It was two-nil on 48 minutes when Gerry Gill advanced through midfield and his cross was headed home by Moran.

Swilly were shell-shocked and it was three on 56 minutes, Doherty slotting home inside the box.

Swilly's effort continued with Mikey Sweeney firing over after good work from Kyle Burke and Laurence Toland hit the post with a deflected effort.

Cockhill were ruthlessly punishing Swilly on the break and further goals followed from Moran, Jimmy Bradley, Doherty and an og.