Keith prepared for a battle of a different kind 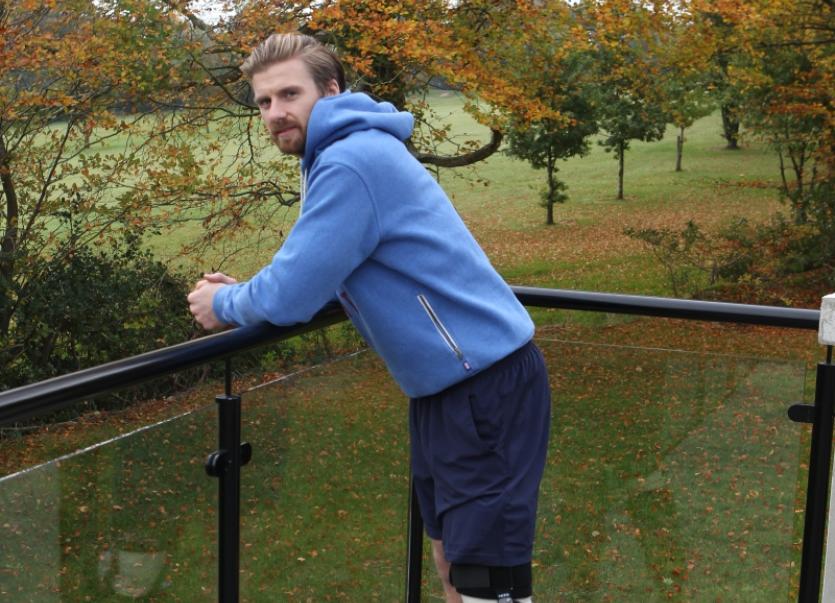 It was just another challenge. The same kind of challenge that he’d make so many times over any 90 minutes.

But when Keith Cowan fell to the ground, it was pretty clear to almost everyone in Finn Park that something was badly wrong.

The centre half, howling in pain, thought at first it was a leg break. In a way, it later transpired to be much worse.

Cowan had gone to challenge St. Patrick’s Athletic’s Jamie McGrath but in the coming together, the defender’s studs got caught in the turf.

“My momentum took me on and I just heard a crack,” he said. “I think when I looked down at my leg, I expected to see a break.

“Someone described it later as like a car crash injury, there was that much damage to the knee.”

Cowan’s knee-cap was broken in two. An MRI scan later confirmed that the ACL (Anterior Cruciate Ligament) was ruptured.

Medical staff have advised that the knee-cap could take up to six months to repair. Once that’s okay, work will then start on the cruciate injury which will take another six months. He’s facing at least a year of rehabilitation and treatment before he can even think about kicking a football.

Amazingly it’s the third time in his career that Cowan (31) has suffered a cruciate injury on his left knee. He knows better than most what it takes to recover from such a problem, but he knows that this time, he’s facing an even bigger battle.

“I think the worst day was last Monday when it hit me most. I’d been going for hospital appointments and been about the house over the weekend. But then on Monday morning, I suddenly realised I’d nothing to get out of the house for.

“I can’t go to work. I’d normally have training in the evening, or be arranging to spend a while in the gym. When you’re preparing for a game, you’ve a busy week ahead of you. But that morning, I just realised, I wouldn’t be doing that for a while.”

Cowan, a PE teacher at Colaiste Ailigh in Letterkenny, will be off work for a good number of weeks. He will wear a brace until then and said he just has to accept that things will have to change for a while.

“It’s the everyday things that are different,” he said.

“Even opening the door is a problem because I’m on crutches.”

He’ll be housebound for a while too.

“I could tell you everything that’s happening in the world of football cause I’m sitting watching Sky Sports News all day,” he laughed.

Cowan has been humbled by the number of messages of support that he’s received since suffering his injury in the Tuesday, October 11th meeting with St. Pat’s.

One of the first phone calls he got was from Jamie McGrath. “He came on the phone and was apologising. I said to him, you’ve nothing to apologise for, it was accidental. He did nothing wrong.

“Their goalkeeper, Brendan Clarke, also got in touch. It was really good of them.”

The support he received from supporters, not just those of his own club, was also a big help. He said he has been well looked after by Harps and the medical teams in Letterkenny University Hospital and in Ballykelly.

“If anyone ever wondered how they would be looked after if they suffered injury playing football at this level, I can say that the care has been brilliant,” Cowan added.

The Letterkenny man had enjoyed a terrific season with Harps and while the club endured a horrendous run of results from the end of July, Cowan came in for special praise from his manager for doing so well during that period.

“This season has been a bit strange,” he admitted.

“It’s been a learning curve for me but I do feel I managed to contribute to the team at times during the season.

“You’re coming up against quality teams and some quality players but I think in the most part we did well.

“Okay, it was hard going after the break and results weren’t going well. But I don’t think we played too badly. We just didn’t seem to be getting the rub of the green in some of those games.”

Thankfully Harps have managed to turn things around, although speaking before their safety in the Premier Division had been secured, Cowan said: “It’s never easy getting injured, and I know it might sound strange, but I think if I can say I played my part in helping the team stay up this season, it’ll help me deal with this injury a bit better.”

For now, Cowan is into the early days of his recovery and has set himself his own goals as part of that process. He’s also been well looked after by his wife Toni - “She’s been absolutely brilliant,” he said.

“For me now, it’s about getting my head right and coming to terms with this. I know I won’t be back playing again for a long time, but hopefully things will turn out okay.”