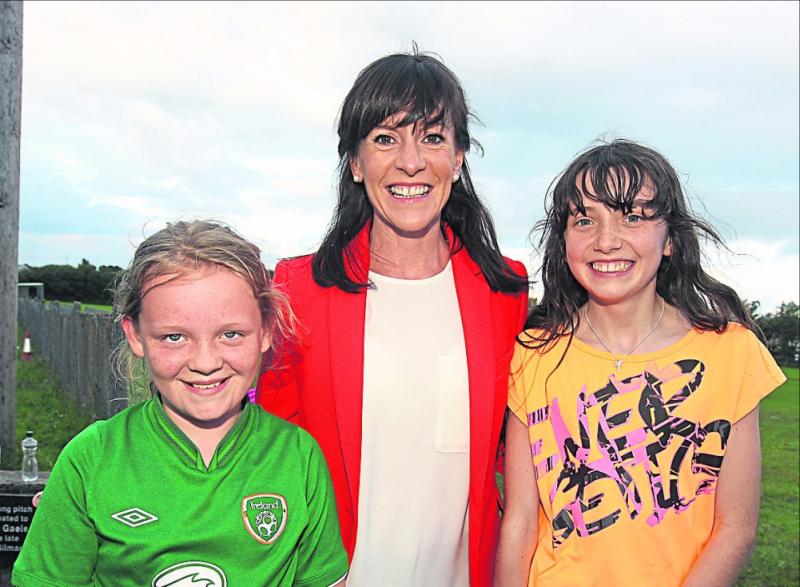 Breege Connolly from Kinlough pictured in June pre the Olympics with Michelle Bernie and Avril Keegan at Kinlough Community Centre.

When the annual Leitrim Sports Star awards ceremony took place on Saturday night in the Landmark Hotel Carrick-on-Shannon, North Leitrim shared in the glory of the occasion with Breege Connolly, Tom Kelly, the Melvin Gaels minor team and Glencar/Manor, as well as the Manorhamilton Area Community Games, girls’ teams getting four of the ten awards on offer.

It was a fitting honour for Breege, who is a Belfast based software tester with global logistic company eShopworld in Newry, and who runs for North Belfast Harriers.

It was also a great occasion for the Connolly clan including Breege’s father, Sean, mother Maureen, her brother’s Matt and Donal, and her sisters Cathriona and Cora.

He has also made a major contribution at community level in Rossinver in many areas of its regeneration. The Leitrim Volunteer of the Year Sports award is a fitting tribute to Tom, who along with his wife Ann and their family have certainly all been true community champions for quite sometime.

Two of North Leitrim’s leading GAA Clubs and great rivals down the years, namely Melvin Gaels and Glencar/Manorhamilton, were give due recognition at the Leitrim Sports Stars awards ceremony for unique achievements at county and national levels, respectively, during the year.

Melvin Gaels created a little piece of sporting history when they won the 2016 Leitrim minor A championship title. They became the first ever Club from North Leitrim to attain this honour and for this received the Leitrim Men’s Team of the Year Sports Star award.

The outstanding efforts of the Glencar/Manorhamilton GAA Club and the Manorhamilton Area Community Games Girls teams, who respectively won the All-Ireland Féile Peil na nÓg and the National Community Games football titles during 2016, saw them honoured with Leitrim Sports Stars Juvenile Team of the Year award.