Carrick school through to Ulster 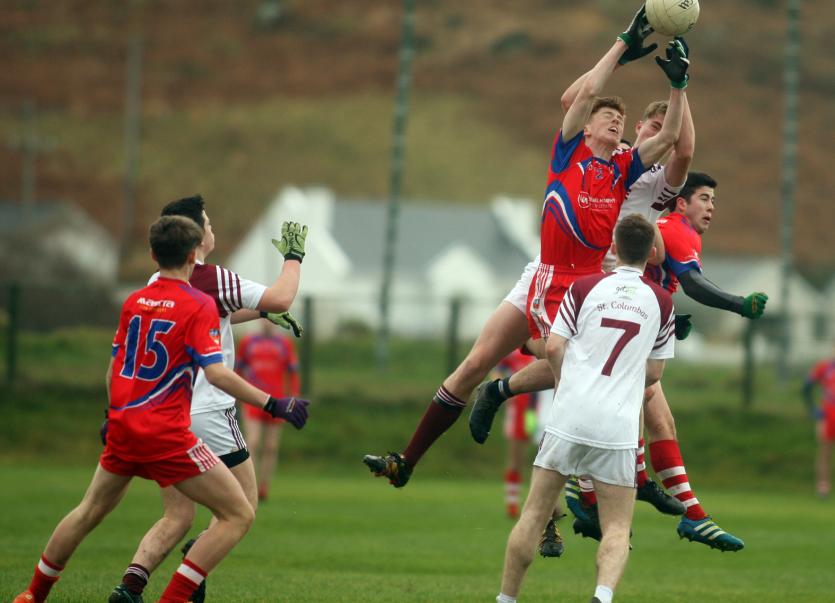 It was a winner-take-all contest in Towney and Coláiste na Carraige now join Coláiste Cholmcille, Ballyshannon in the Ulster part of the competition after Christmas.

The Glenties boys were without Eoghan McGettigan and by half-time they were facing an uphill task as they trailed 1-9 to 0-4.

They had started well and thanks to three very good points from Paul McGuinness, Robbie Adair and Eoghan Harkin in a three minute period, they led 0-3 to 0-1 after 11 minutes.

But Coláiste na Carraige gradually got going and Aaron Doherty kept the scoreboard ticking. They had a couple of goal chances before Gary Molloy finished to the net after a good pass from Paddy McShane on 25 minutes.

The start of the second half was a disaster for the Glenties boys as they shipped two goals in four minutes. The first came after a mistake by the Glenties 'keeper and David Love nipped in to slide home while Ryan O'Donnell fired home the second.

But credit to St. Columba's, they battled away and thanks to a well taken goal by Jack Flannery they got back in the contest. They reduced the leeway to six, 3-10 to 1-10 but were unable to get any closer as Aaron Doherty finished the game with the final two points.

Before the end, the Glenties side were reduced to 13, Simon Breslin getting a straight red for a head high challenge on Brian O'Donnell and Dara O'Donnell (two yellows) for a tussle off the ball.