When Finn Harps appeared in the Panini sticker album

The story behind a rare Harps sticker 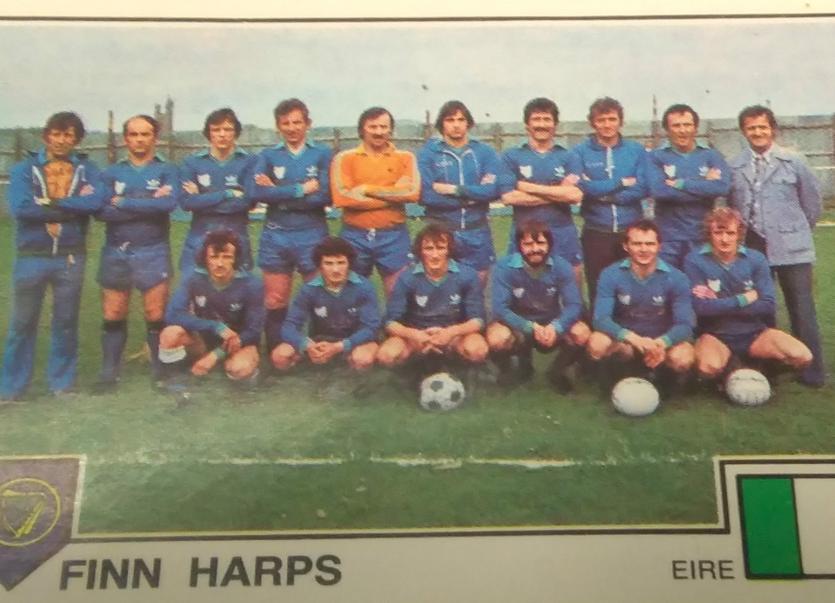 The Finn Harps Panini sticker from 1978/79. Can you name any of the players?

It’s a collector’s item which is bound to jog the memories of sports fans in Donegal.
Back in 1979, the famous Panini football sticker album featured a Finn Harps team photo.
It’s the one and only time the Ballybofey club have been included in the famous publication.
Colm McDaid, a lifelong Finn Harps supporter, is the proud owner of three of the rare stickers. They are part of a collection of Harps memorabilia that has accumulated over the years in his Letterkenny home.
“My father (Stephen) was a big Harps fan and was on the committee for a few years too,” Colm said.
“He has a big collection of match programmes and many of them are from some of them are autographed from some of the big games against teams like Southampton and Celtic.
“We have fixtures cards too from way back in the early ‘70s with all the results written in.”
But the Panini stickers are something that few Harps fans would have seen before.
Club historian, Bartley Ramsay, said the Harps team photo was taken for a Panini Euro Football annual from 1979.

Familiar faces
The team photo features some familiar faces, including team manager, Eunan 'Busty' Blake, on the right.
“The photo was taken in 1978 and Harps were in the annual because that was the season in which they played Everton in the UEFA Cup,” he said.
“A photographer from Derry, who used to take photos for Shoot! magazine, came out and took the photo at Finn Park.
“The Linfield and Bohemians team photos from the annual were also taken at Finn Park.”
Harps played Linfield in the Tyler Cup at the end of 1977/78 and it was a match to remember. Linfield came from 5-1 down to draw 5-5 before losing on penalties.