'Getting Hegarty was a master-stroke by Horgan' - Stephen Kenny 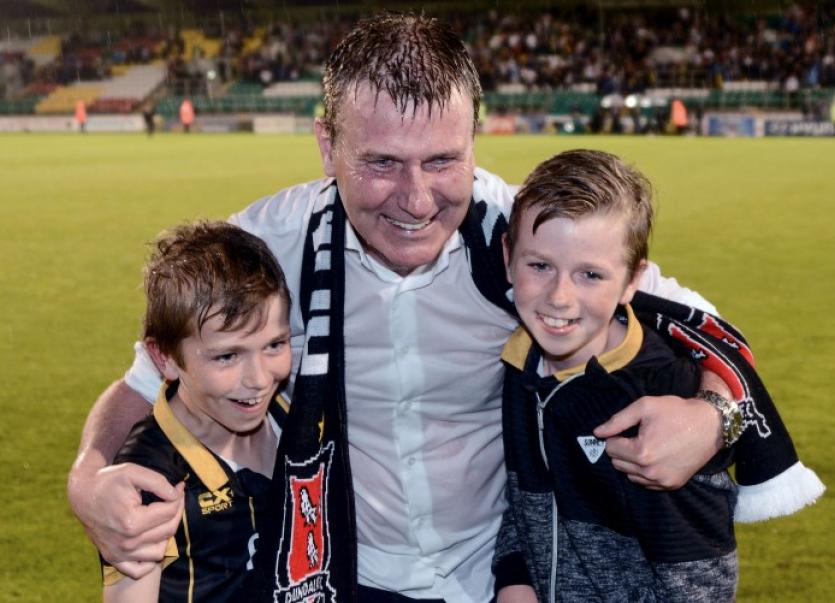 Stephen Kenny, with his sons Eoin and Fionn.

He managed Dundalk to the league title in impressive style and in the process guided the champions to a scintillating 7-0 league victory over Finn Harps in Ballybofey.
But as he prepares his team for the defense of another Premier Division title, Stephen Kenny said Harps supporters can have plenty of reason to be optimistic ahead of the new campaign.
The Dundalk boss, who lives in Fahan, is all too familiar with the talents within Ollie Horgan’s squad. He said Harps have bought well during the close season.
But he points to an arrival during last season as the club’s best bit of business.
“I think it was a very brave move on Ollie’s part to bring Paul Hegarty on board last season,” he said.
“But when you look back, it was a master-stroke.
“I say it was a brave move because you were bringing back a former manager.
“Having worked around him during my time at Derry City, I know what Paul brings. He has a tremendous work ethic. He knows the game and he knows how to get the best out of players.”
Horgan and Hegarty are working with a much changed squad ahead of the new campaign, but Kenny feels the new additions will bring quality.
“They’ve lost a few players from last season, but they’ve got some new players in and they’re all good signings,” he said.
Kenny has overseen the loan deal which sees Ciaran O’Connor swap Oriel Park for Finn Park.
“He’s a player who gives it everything,” Kenny said.
“He’s a real handful for defenders. He’s aggressive in his running and can score and create goals. He’s only 20 and is a real good player.”
He added: “This year, they’ve got Morrissey from Cork and now they have Ciaran O’Connor, so there’s goals in that team.”