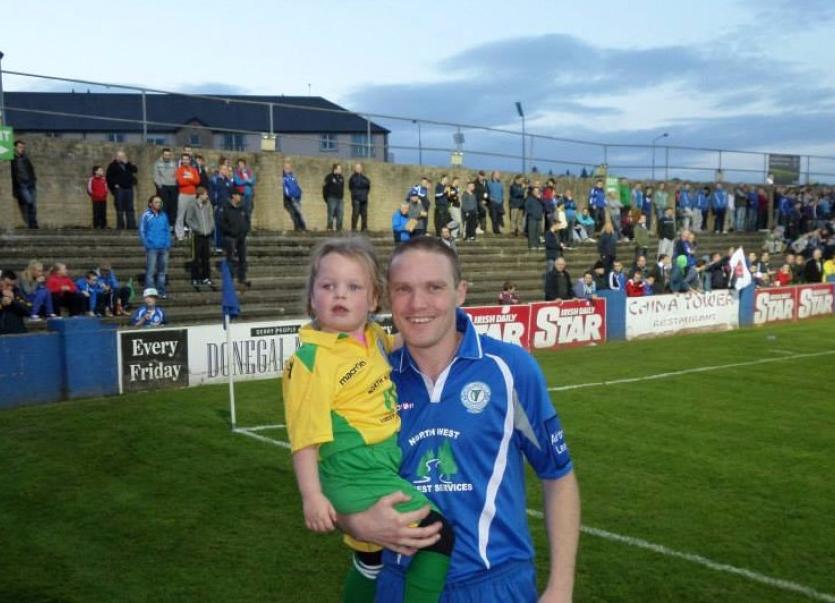 Shaun McGowan with his daughter Katie

Ten points clear at the top of the CT Ball Division, Ballybofey United are just three wins away from clinching the title.
Last Sunday’s victory at Eany Celtic, coupled with Lifford Celtic’s surprise defeat at Whitestrand United, has left Ballybofey with one hand on the league trophy, even with six games still to play.
It’s been a fantastic season for the Twin Towns club - they’re also through to the semi-finals in the Brian McCormick Sports Cup. Yet when you consider the amount of experience and talent within their squad, it’s probably no surprise that they’re doing so well.
One of the players who has been central to their excellent run of form is Shaun ‘Wizard’ McGowan. The 32-year-old, who played over 250 games with Finn Harps, insists he hasn’t lost any of his passion or desire for the game and if he can help Ballybofey to a league title, then he’ll be delighted.
“I played all my football with Ballybofey when I was a young fellow,” he said.
“This is my third season back playing with them now and it’s been great. We finished fourth in this division in the last two seasons, so hopefully now we can go on and win it this year.”
McGowan was among the goals during last Sunday’s 5-1 win away to Eany Celtic. “I don’t score too many these days,” he laughs.
“I’m back playing at centre half now so I might get the odd header from a corner.”
The goals might have dried up, but there’s no underestimating the importance of having a player like McGowan to call on at this level.
A gifted footballer, he could never be faulted for effort and commitment during a career at Harps where he sampled the highs and lows of playing in the League of Ireland.
“We had some fabulous times there and I loved every minute of it,” said the player who was handed his debut by Noel King back in 2003.
“We were promoted twice and unfortunately, relegated twice as well.
“I think the 2007 season was one of the best. We got promoted up through the play-offs after going on a long unbeaten run. That was a fantastic experience.”
He added; “Harps are a great club. They’re my hometown club and I was proud to play for them. They’ll always be my team.”
Another former Harps man, Brian ‘Barney’ Lafferty, is the man in charge of Ballybofey with McGowan and the experienced John Gregg helping out with coaching duties. Neil Lloyd, who also played with Harps, is among the playing squad while goalkeeper Chris Patton, Rory Dunleavy and Niall McCloskey played underage at Harps.
“Damien Glackin has had a brilliant season for us as well,” McGowan said.
“He’s got 20-odd goals in 14 league games which is some going. His goals have been a big help to us this year.”
Ballybofey remain unbeaten in the league this season and their only league points dropped came after Christmas when they drew 1-1 at Drumkeen United.
“We just didn’t turn up that day,” McGowan said.
“When I think back, we were fortunate to get out of there with a point.”
McGowan is also keeping a close eye on developments in the Temple Domestic Appliances Division One where Cappry Rovers currently sit top of the table.
There could be double league celebrations in the Twin Towns by the end of the season and in the McGowan household too. Shaun’s father, Wizard senior, is coach with Cappry and Shaun’s brother Darren is on the team.
McGowan, who does a bit of underage coaching with Ballybofey United, said his biggest fan is his daughter Katie (7) who goes to all Ballybofey’s games.
“She loves going to the matches and watching the games,” he said.
No doubt Katie will get a chance to lift the league trophy when barring a disaster, Ballybofey United are eventually crowned champions later in the season.