Resuls and fixtures for the week ahead 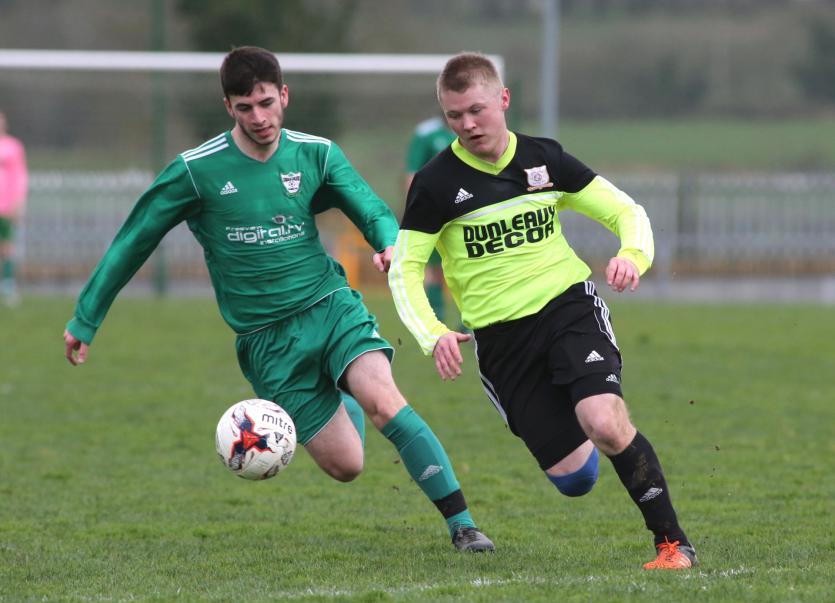 Reigning champions Drumoghill FC gave their title hopes a timely shot in the arm when they defeated St. Catherine's in the Premier Division on Sunday.
Drumoghill were the only team to win in the top division. The other two games both ended in draws with leaders Glenea United held by Castlefinn Celtic and Milford sharing the points with Kilmacrennan Celtic.
In the CT Ball Division, Ballybofey finally clinched the title on Sunday with a 6-1 win over Copany Rovers (see page 22).

Brian McCormick Premier Division
Glenea United . . . 1
Castlefin Celtic . . . 1
It was the visitors who started the quickest and had a couple of half chances to open the scoring. Their best effort being from a JP Mailey free-kick that just went narrowly wide.
Glenea opened the scoring on the stroke of half-time when Sean Coll's clearance was picked up by Ciaran Mc Geady and he drove at the defence and his low shot found the corner of the net.
The 2nd half was a tight affair with both defences on top and chances at a premium. However, Castlefinn equalised on 70 minutes when the ball broke to JP Mailey and he slotted home from close range.
Glenea pushed on looking for another goal and Ciaran McFadden went close on 75 minutes but his effort was well saved.
Right on full time Darren Ferry was denied a late winner with another fine save from the away keeper.
Drumoghill F.C. . . . 1
St. Catherine's . . . 0
Jay Dee Alawiye was the hero on the day with his first half strike proving decisive. The winner arrived on 24 minutes after good work from Malseed and Ritchie Moore in midfield, it was left to Alawiye to beat Mullin at his near post.
Drumoghill, playing with the benefit of a breeze in the first half, had chances to extend their lead before half time but failed to convert on each occasion.
St. Catherine’s were dominant during the second half and will still be wondering how they didn’t equalise on 54 minutes. Mickey Toner couldn’t hold a decent effort from Barry Cannon, Toner then saved from Cannon’s follow up before the ball fell to the onrushing Ryan Farrell whose goal bound effort was somehow flicked away from goal by Tristan Ferris.
Although the visitors were dominant in pursuit of what would probably have been a deserved equaliser, it was Drumoghill that actually created the better of the chances with Pajo Rafferty twice denied in one on one situations on the counter attack.
Referee: Mick Lagan.

Lifford Celtic . . . 3
Cranford United . . . 2
The first half started well for Lifford and they put Cranford under pressure from the off. They went close through Mahon, McBrearty and McNulty but the Cranford defence held firm and they were dangerous on the counter attack throughout.
The game burst into life early in the 2nd half when Niall Doherty raced clear and beat Given with a cracking finish into the top corner. Lifford regrouped and were level almost immediately when Jason McBrearty scored from 20 yards after a pass from Paul McNulty.
The home team went 2-1 up when they were awarded a penalty after Marcus Mc Donnell was fouled in the box, Mc Brearty stepped up to send the keeper the wrong way for his 2nd of the day. Lifford made it 3-1 on 75 minutes when Stuart Carlin played a neat 1-2 with James Mc Nulty and finished into the bottom corner. Cranford scored deep into injury time to make it 3-2 but it was too late to change the outcome.