Unbeaten Castlefinn Celtic on the verge of league honours 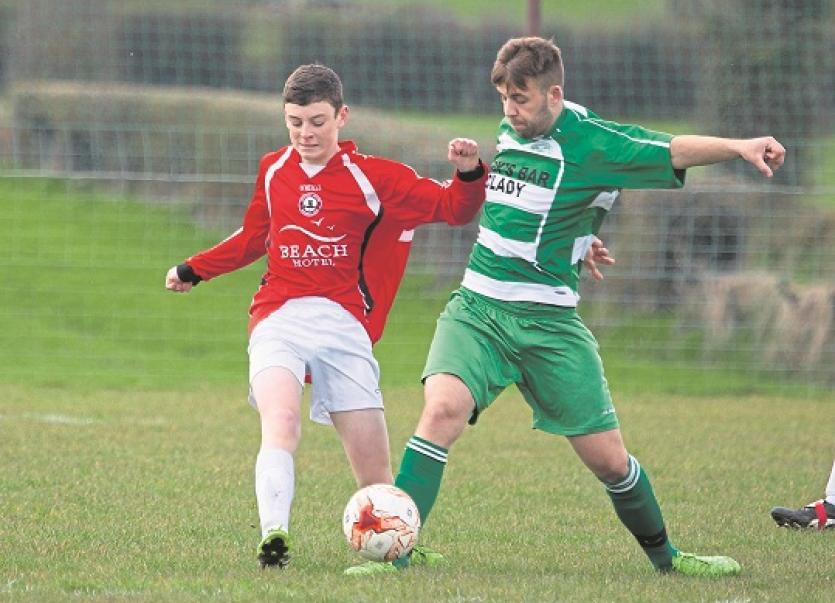 Action from the meeting of Glenea United and Castlefinn Celtic in the Saturday League Reserve Division last season.

It’s not every club that can say they went through an entire league season unbeaten, yet still end up without any silverware.
But that’s what happened Castlefinn Celtic last year in the Donegal League’s Saturday Reserve Division.
Amazingly, they’ve gone 16 league games without defeat in the 2016/17 campaign and this Saturday, they will finally get their hands on the league trophy if they can win at Kilmacrennan Celtic.
For manager, Ronan Tourish and his players, a title success is long overdue.
“You could say we’ve gone almost two seasons now unbeaten in the league,” he said.
“We lost out last year to Glenea United. We did beat them, but the problem was, we drew far too many games ourselves and they won the league.”
The tables have turned this year with Glenea in second spot for almost the entire campaign.
“In fairness to them, they’ve pushed us the whole way,” Tourish said.
“We beat them earlier in the season and then drew with them away from home.”
Castlefinn lead the way in the division by four points and have four games left to play compared to Glenea’s two.
They will wrap up the league title with a win at Kilmacrennan on Saturday and for Tourish, who along with Mervyn Stewart, is in his third season in charge of the side, it would be a fantastic finish to the season.
“We’ve done really well this year,” he said.
“It’s more or less the same side that was here last year. Simon McGlinchey came down from the first team and he has been a massive help to us.”
Tourish also offered special praise for his striker Keith Nelis who has scored 25 goals in this campaign.
Kevin White, who was also part of the managerial team, is currently back home from Australia and Tourish said it would be great for Kevin if Castlefinn could win the league while Kevin is home.
“We’re due some silverware at this stage,” the manager added.
“We were runners-up last year, and in the two previous seasons we got to two cup finals but lost both of them. Hopefully we can get over the line on Saturday and we canl have something to celebrate this weekend.”