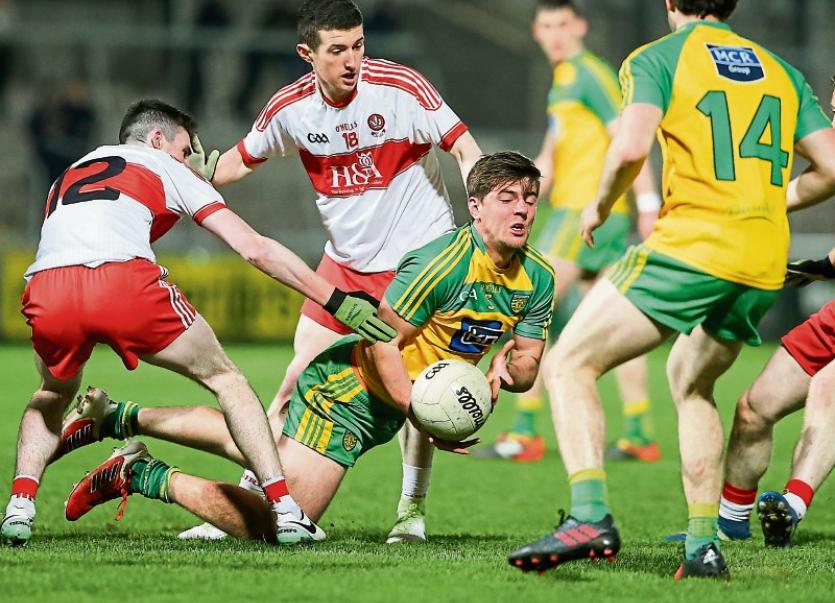 Donegal U-21 are back in an All-Ireland semi-final for the first time in seven years and once again Leinster Kingpins, Dublin, are their opponents.

The game is in Kingspan Breffni Park, with a throw-in time of 2.30pm, and is a repeat of the 2010 final meeting at the same venue.

The two teams also met at minor level in 2014 in the All-Ireland semi-final with Donegal emerging the victors at the end of an absorbing contest, with a point to spare.

Dublin, like their seniors, have been the dominant force in Leinster in recent seasons and won a fourth provincial crown, with a comfortable 2-14 to 0-8 win over Offaly,

The side managed by former darling of the Hill and a man with strong Donegal ties, Dessie Farrell, were a good bit ahead of the rest on their way to that fourth Leinster crown.

They defeated Westmeath 2-14 to 0-6 on the first day out and followed that with an almost equally convincing 2-10 to 0-9 win over Longford in the semi-final.

“Dublin are a good side and they are going to be a step up on anything we have met so far,” insisted Declan Bonner following Monday night’s 3-17 to 0-13 Ulster final win over Derry.

Apart from their opening round stumble against Tyrone, which ended in a 0-14 each draw in Omagh, it has been plain sailing for Declan Bonner’s charges since that night.

They left Tyrone in no doubt a week later back in Ballybofey who were the best team with an 0-18 to 1-9 victory.

And they followed that win up with a 3-17 to 0-13 demolition of Cavan in Brewster Park.

“We know Dublin are a good side and we played them behind closed doors in Monaghan a number of weeks ago.

“We won that game by a couple of points but they were without Con O’Callaghan that night and Chris Sallier that night too. But we were short a number of lads too.

“They probably have the edge in that Dessie Farrell has got a good look at us in our last two games.

“But knowing us and knowing how we play is one thing, knowing how to stop us and play against us is another thing.”

Dual player Con O’Callaghan, an All-Ireland Club hurling winner with Cuala, along with Aaron Byrne and Chris Sallier, are the men to be watched in the Dublin attack.

Byrne hit 2-3 against Westmeath and O’Callaghan bagged 2-5 against Longford.

Michael Langan has kicked 19 points in Donegal’s four games and was this week named the Eirgrid U-21 Player of the Province.

The St Michael’s man has undoubtedly been one of the standout players of the campaign to date.

But Donegal have had a number of big performers over the four games. Eoghan Ban Gallagher, Cian Mulligan, Michael Carroll, who has improved as the campaign progressed; Stephen McBrearty, Dáire Ó Baoill, Jamie Brennan. Conor Morrison, Danny Rodgers, Tony McCleneghan and Lorcan Connor have been the rocks on which the run to a first provincial crown have been built upon.

Apart from a run out in the closing minutes of the replay against Tyrone in Ballybofey, Donegal have been without Gaoth Dobhair’s Kieran Gillespie.

Gillespie, who more or less established himself in the senior team last season, has been struggling with a hamstring injury.

And the big Gaoth Dobhair man is set to miss Saturday’s showdown with the Dubs.

“The game is going to come too soon for Kieran, which is unfortunate,” said the Donegal boss.

“He is probably ten days away from being ready. If we make it to the All-Ireland final he should be back in the frame.”

Donegal have no other injury concerns.

Conor Morrison, who started at corner-back on Monday night, was introduced from the bench in the minor semi-final.

And Ethan O’Donnell and Caolan McGonigle, who saw action as replacements against Derry, started the minor game.