Mark McHugh outstanding as Kilcar too good for Glenswilly

McHugh only county player on view 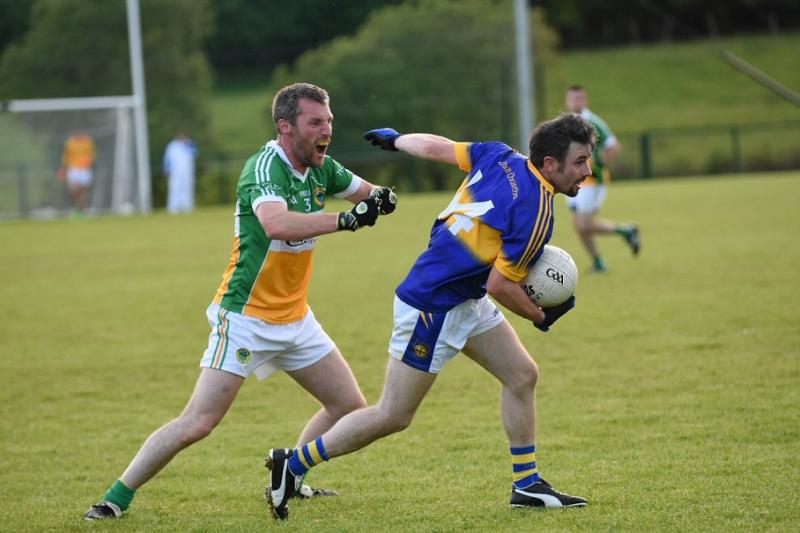 Ashley Carr gets away from Eamon Ward

Kilcar had a little too much firepower up front as they collected another brace of points against Glenswilly.

Glenswilly were without county captain Michael Murphy while Kilcar lined out with Patrick McBrearty, Ryan and Eoin McHugh, Ciaran McGinley and Andrew McClean, the latter having gone to the US for the summer. McGinley came into the game at half-time.
However, it was the other county player, Mark McHugh, who was the main reason for the Kilcar win. Playing at midfield, he contributed heavily to the winners.
There was little between the sides for much of the opening half, but Kilcar hit three points in five minutes towards the end of the half to take a two point advantage to the dressing room.
Before that scores were few and far between and both sides, especially Kilcar, were using the long high delivery, which had little return.
Cormac Cannon had the opening point for Kilcar on two minutes but three minutes later Glenswilly were on terms when Gary Copper McFadden pointed after a Glenswilly effort for goal was blocked.
A turnover by Mark McHugh saw Kilcar regain the lead as McHugh quickly fed Ashley Carr to point, but the sides were level again on 15 minutes when in a good move, Copper McFadden was in on goal but his right footed effort went just over the crossbar.
Then came the Kilcar blitz with three points from the 23rd to 28th minutes, two from Ashley Carr (one free) and an effort from distance from Mark McHugh.
Before half-time Gary McFadden pulled a point back after a late tackle on a Glenswilly player and Copper was just wide with another effort on the stroke of half-time.
Half-time: Glenswilly 0-3, Kilcar 0-5.
Glenswilly were on terms within three minutes of the restart through Kealan McFadden and a Copper McFadden free.
Ciaran McGinley made his presence felt as he was fouled for Stephen McBrearty to edge Kilcar back in front, but they needed an alert Daniel Lyons at the other end as a Cathal Gallagher high ball was fumbled.
A free off the ball in front of the Glenswilly goals allowed Matthew McClean to push Kilcar two clear, but after a good run from Conor Boyce, Kealan McFadden left a point between them again.
However, that was to be as good as it got for Glenswilly as Kilcar hit four unanswered points to take control. They came from Mark McHugh, Michael Hegarty (with outside of right), Ciaran McGinley and a Stephen McBrearty free after Mark McHugh was fouled.
Points from Copper McFadden and Ryan Diver gave Glenswilly some hope but they lost Leon Kelly to a black card as Ciaran McGinley fired over Kilcar's 12th point to put them four clear again.
That lead was pushed out to seven with points from Aodhan McGinley (2) and Matthew McClean (fist) as the visitors finished strongly.
On the stroke of time Glenswilly got a consolation goal when substutute Christopher McMonagle got on the end of a high ball to fist to the net.
Overall, Kilcar deserved the victory and it was an impressive result given the absentees.