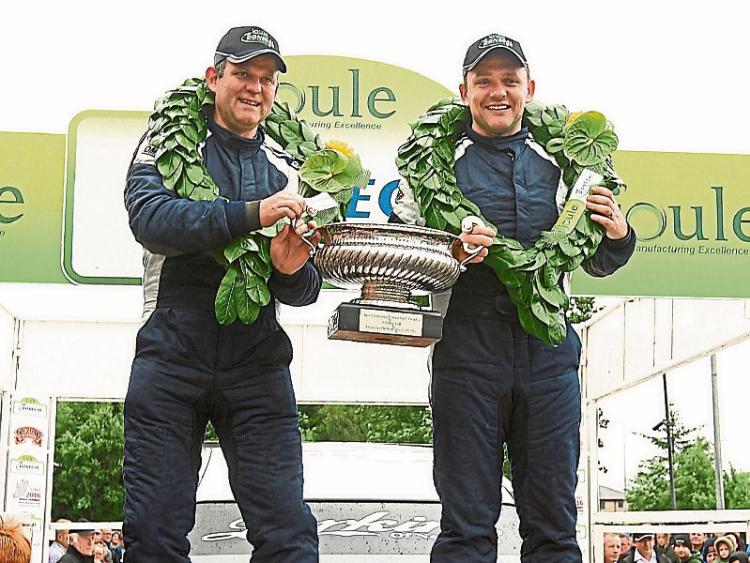 Manus Kelly and Donall Barrett are going all out to put Joule Donegal International rallies back to back.

They have already equalled the feat of Vincent Bonner from Dungloe and Seamus McGettigan from Letterkenny. Bonner and McGettigan were the first all Donegal crew to win the Donegal Rally in 1983 in an Escort.

Manus Kelly and Donall Barrett won last years Joule Donegal Rally, in dramatic fashion with a .5 of a second win in their Subaru S12 WRC over Keith Cronin from Cork, in a Citroen DS3 R5.

Manus Kelly from Glenswilly and Milford native Donall Barrett will be the first car off the ramp when the three day rally rolls off the ramp tomorrow morning on the Port Road in Letterkenny.

“It is an unbelievable honour to be in the number one car in your home rally,” said Manus this week as he gears up for this yea’rs rally and the defence of the title.

“It is great to have Donall back, too, and we are really looking forward to the rally and defending our title.”

Donall Barrett, who has been Manus’s wing man for the best part of the last ten years, retired following last year’s triumph.

But the Dublin based business man has had a change of heart and has come out of retirement to have a go at one more Joule Donegal International Rally.

Gareth Doherty had replaced Donall in the navigator's seat. But the Letterkenny man has stepped aside to make way for Barrett.

“It is great to have Donall back and it wasn’t an easy call for Donall to make, to call Gareth (Doherty) and tell him he wanted back into the seat.

“Gareth had been doing a great job the last few rallies we did and is a very talented navigator and he has a great seat now in the national rally.

“Donall and me have been together for ten years and we have come through a lot together, some very good days and an odd very bad one.

“That experience from Donegal last year and all the stuff we went through and learned is vital. All the wee pieces of the puzzle make for a better preparations for the event.

“And that is why it is good to have him back on board and come Friday morning we are just looking forward getting down to brass tacks.”

Donall joined Manus on Tuesday of this week for the first time and it was straight into recce for the weekend’s event.

“I have been preparing well the last few weeks with all the team and preparations have been going very well.

“We just started recce today and it went well and it is all coming together well.”

Last year’s winners may be under pressure to perform once again and go where no all-Donegal crew have gone before win Donegal back-to-back.

“Surely, we are the reigning champions and we are starting number one on the road.

“But at the end of the day we are going out to get the best we can out of the car.

Manus also believes they are better prepared than last year.

“Since Donegal last year I’ve had three rallies in the car, albeit they are well spaced out.

“Every time you get behind the wheel you get more familiar with the car.

“I suppose last year we got caught out with the recce and that is how we ended up in the field.

“We just missed it in the recce and didn’t realise that we were at the wrong speed. We have that ironed out now and we have built up great experience last year in the car and we are going to take it into this year.

The plans for the weekend is to be competitive from the first stage and to be still in the rally on Sunday morning.

“Regardless whether we are number one or four or five the important thing we are still there on Sunday morning and we are still in there with a shout.

“There is never much between us, the top five or six guys, when we are out in rallies and I cannot see that change all that much this weekend.

“When you have that title, especially the title of Donegal International Rally champion, you are not going to give it up too lightly.

“We would love to experience that feeling we felt last year and the excitement of it being half a second of a margin.”