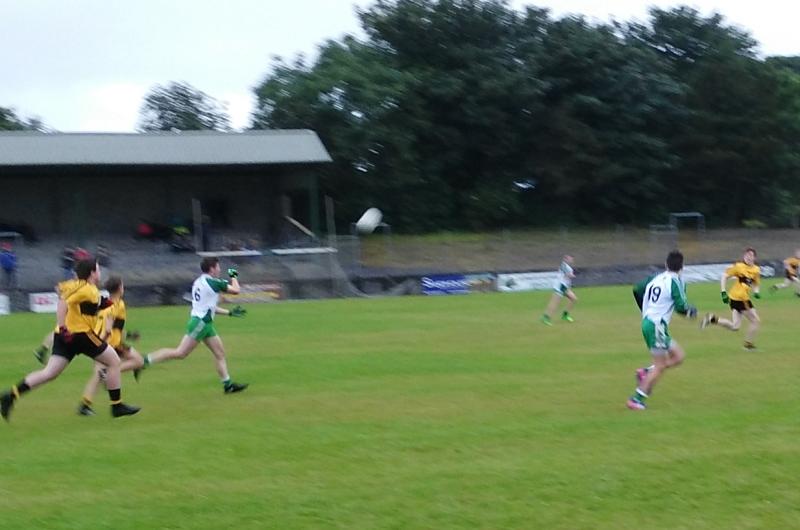 Thanks to dominance around midfield, Aodh Ruadh proved too strong for St. Eunan's in the U-14 League quarter-final in Fr. Tierney Park.

Aodh Ruadh built a match-winning lead in the middle of the first half after there was little between the sides in the opening ten minutes.
A goal from Kyle McCaffrey after five minutes was cancelled by a goal by Jack Dwyer at the other end.
But midway through the opening half Aodh Ruadh hit 1-5 without reply to open a 2-7 to 1-1 lead. Aaron Neilan led the way for the winners hitting the second goal and also added a point whiole Marty McGarrigle chipped in with two with the impressive Ryan Keenaghan also on the scoresheet.
Just before half-time Liam Hannigan hit two points for St. Eunan's, who missed a number of point opportunity.
Half-time: AodH Ruadh 2-7, St. Eunan's 1-3.
Whatever chance there was of a St. Eunan's comeback was nailed within a minute of the restart when Marty McGarrigle found Danny Breen with a great ball across the goal and Breen found the net.
Aaron Neilan quickly added two more points and Cian Rooney posted one, while Nathan Plumb had a point for the losers and Liam Hannigan had a second goal.
But then Marty McGarrigle got in for a fourth goal and the game was as good as over as Aodh Ruadh led 4-10 to 2-4.
McGarrigle and Neilan had further points before St. Eunan's finished well with two goals from Jack Dwyer, the last one in the final minute as his free was saved but he first timed the rebound to the net.
Apart from Neilan and McGarrigle, Aodh Ruadh had strong performers in the full-back line, Kyle Murray, Ryan Keenaghan and Cian Rooney, while Aaron Cullen made a number of good saves.