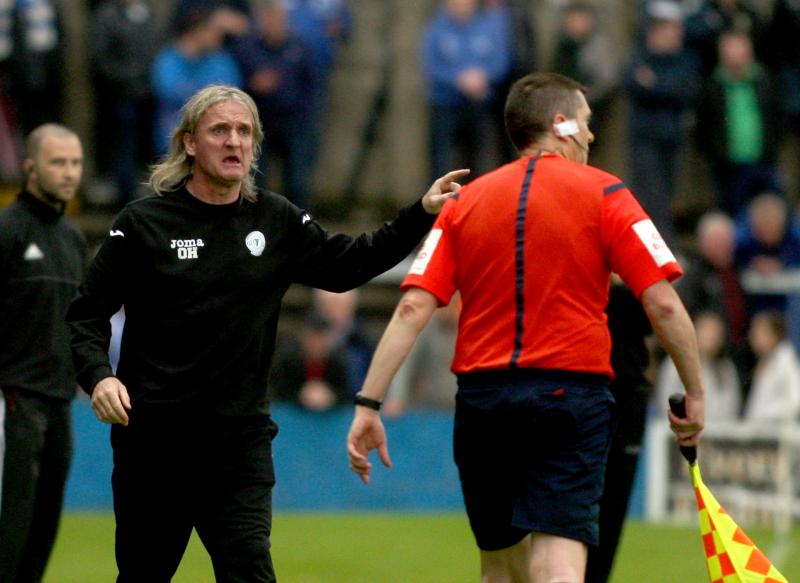 Relieved more than anything was the immediate response from Finn Harps manager Ollie Horgan following the 2-1 win over Bohemians.

“We did well  for the majority of the game  and in fact up until we went 2-1 up,” said the Harps boss.

“But from there until the end Bohs completely steamrolled us  and we just hung on by the skin of our teeth.

“We started well and got in behind them a few times. But when you are facing quality like Dinny Corcoran and Keith Ward and if you make a mistake you are punished.

“Gareth Harkin got caught on the ball and I think Keith Ward dinked it in over Packie Mailey and Corcoran finished it well.”

The important thing for the Harps boss was that Harps responded well and five minutes later Eddie Dsane hit the equaliser.

“The fact that we got the goal early got us back into the game and that was important.

“If it was a case that it took us some time, it might be a case of them sitting back and us trying to get at them.

Thankfully it turned out to be the reverse.

“I wasn’t sure if it took a deflection,” said the Harps boss on Dsane’s 34th minute equaliser.

“But you need a decent strike to beat Shane Supple. He has been here with various teams over the years and I don’t think we scored against him until tonight.

“I think the timing of the goal was as important as its quality. The longer we went 1-0 down and with the quality they have with the likes of Lorcan Fitzgerald, Georgie Poynton on the other side, they have serious players, it would have been more difficult for us.”

Sean Houston scored Harps second goal for a 2-1 lead 13 minutes into the second period and  some neat footwork in the box from Paddy McCourt.

“I think everybody including me thought that Paddy McCourt was going to have the shot and they all waited but he got the reverse pass and with the dink inside he found Sean who finished well.

“But that is the quality he brings to it and to be fair I didn’t see the pass but to his credit Paddy did and Sean finished well.”

Friday night’s win was Harps second on the trot and saw them move to within two points of Bohemians, who are in seventh place in the league table.

However, the Harps boss was not losing the run of himself after as he quickly pointed out they had gone on a similar type of run last season at this time and ended up in a fight for survival.

“We were here this time last year. We beat Galway in a close game here and we thought we were on a good run.

“All of a sudden it turned and it was September before we scored again and we went eight games without any points.

“It can easily go from you but hopefully it can stay just as easily if we work at it.

Horgan gave new signing Ibrahim Keita, who had only signed on Friday afternoon, some game time. Keita replaced Danny Morrissey, who limped out of the game late on with a hamstring tweak.

And with the impending arrival of Tommy McBride, Horgan has strengthened his squad.

“We need them because it looks like Danny Morrissey is going to be out for a while.

“We need people able to step in when the likes of Danny are out injured and thankfully we have Keita and Tommy.

“We probably need one or two more to see out the end of the season.”

However, the Harps boss said unless they can find someone to sponsor a player he is going to have to make do with the squad he has for the rest of the season.