Four Masters take Donegal Division 1A and B U-12 titles 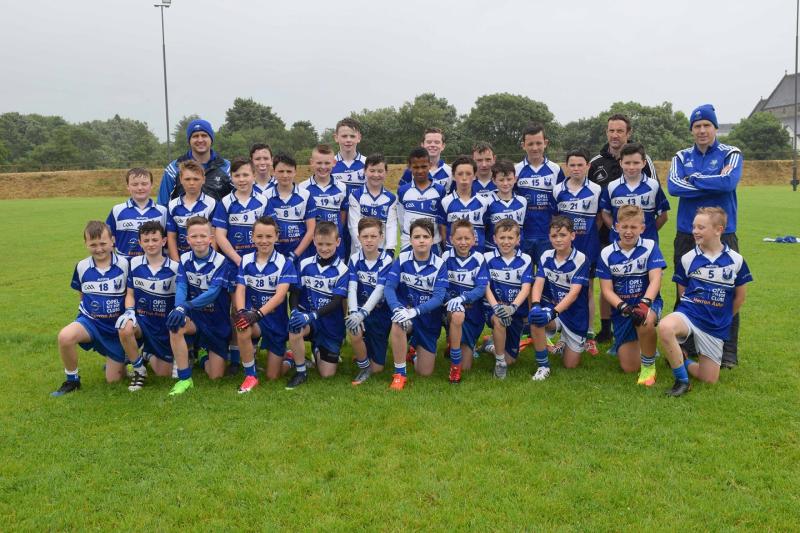 A gallant set of Four Masters footballers swept the boards at an excited MacCumhaill Park on Saturday 15th July, lifting both Division 1 A and B Championship titles to take both sets of silverware back through Barnesmore gap.
With names like McIntyre, Dunnion, Caldwell, Carr, Sweeney, McMullin, Quinn, Duke, Muldoon, Meehan, Woods (I could go on but don't have the space) one could have been forgiven for thinking the clock had been turned back to U-12 games of 30 plus years ago, but this is the new generation of future stars and with the skill and passion on display throughout the day, stars in a blue kit is indeed what was in evidence throughout the day.

MacCumhaills A and B
First up were two titanic battles with the host club. The A's went in at half time 1-03 to 0-03 down but goals from Daniel Quinn and Kiernan Duignan put the visitors in front. Duignan and David Monaghan added further points and with the game still in the balance, Ruairi McLaughlin dispatched a super goal to get Four Masters off to a flying start in the competition. A good performance built from the back with the excellent goalkeeping skills of Daniel McIntyre providing a platform from his bullet like kickouts.
A young man called John Bell decided he had waited long enough to make his finals debut for the B 11 and helped himself to a blistering four goals in his first outing. The captain of this squad showed great leadership and poise, palming three goals to the net, which were added to by Conor Quinn and Shayne Martin Kilcoyne. Calum Dunnion and Oisin Doherty also chipped in with points to ease Four Masters to top of their group after one game.

Malin A & B
Damien Dunnion and his management team made a few changes for the Malin games and once again the A-Team were up first. This was another tight first half, with Four Masters up by a goal at the half time break via scores from Daniel Quinn (goal) and points from Ruairi McLaughlin and Kiernan Duignan. Four Masters put the after-burners on for the second half with Quinn (goal) and Duignan (2 goals) at it again before Conor Meehan closed the game out with a point.
John Bell led his team out for their second outing and again, with a sound platform provided by Daniel O'Sullivan and excellent tiggerish defending from Michael McMullan. Tiernan McBride, the impressive Kevin Muldoon, John Bell, Oisin Doherty all contributed goals and Callum Dunnion found the groove with 2-02 to compound Malin's misery. Michael McMullan sauntered forward to bring the game to finality with a well taken point.

Glenswilly A (No B team entered)
This was the group decider and most intense game of the day. The Glen lads brought a different challenge and it took Four Masters some time to settle into a game which was very much stop start. When all settled down by the half time whistle the sides were level at two points each, Conor Meehan and Daniel Quinn contributing for the boys in blue.
Conor Meehan continued where he left off and put Four Masters into an early lead but Glenswilly struck with a goal to take a two point lead. Ruairi McLaughlin pulled two points back to level it but Glenswilly struck again for a one point lead with two minutes to go. Four Masters were on the verge of missing out on the A final but a move started by Mikey Duke, Jake Graham, Calum McCrea and Leo McGowan put Daniel Quinn through who's shot was foot blocked by Glenswilly. Ruairi Mclaughlin slotted the free under intense pressure to put Four Masters through to what was the A County final against Aodh Ruadh.

Division 1 A County Final
Near neighbours Four Masters and Aodh Ruadh fought out the A county final and the Ballyshannon lads opened well to go a point up with five minutes gone. Damien Dunnion's mentors Emmet Gallagher and Joyce McMullin didn't panic and their young charges responded in kind with a Kiernan Duignan point, Conor Meehan goal, two points from Ruairi McLaughlin and another from Daniel Quinn. Half time was then called and whilst the scoreline may suggest it, this was far from plain sailing and the young Four Masters lads still had it all to do.
This was emphasised by Ballyshannon coming back with a point, but Kiernan Duignan responded in kind, added to by Daniel Quinn. One stand out aspect of the day was the free taking of Ruairi McLaughlin and he landed a monster free to seal the title and break Aodh Ruadh hearts.
The culture of this team was emphasised late in the game as Aodh Ruadh broke down field to create a goal scoring opportunity. Daniel McIntyre stood up and made an excellent save, but Aodh Ruadh won the second ball and on attempting to dispatch to the net, some four to five Four Masters defenders threw themselves in front of the ball, Jake Graham to the fore, to restrict the Ballyshannon lads to one point in the final. As outlined above, skill and passion in equal measure.
Chants of Championees rang out in the damp Ballybofey evening from the squad as follows:- Daniel McIntyre, Jake Graham, Mikey Duke, Callum McCrea, Leo McGowan, Fiachra O'Donnell, Senan Carr, Conor Meehan, Ruairi McLaughlin, Daniel Quinn, Kieran Duignan. Subs used - Caolan Sweeney, David Monaghan, Kian Carr.
Whilst some individuals are named in the above summary, this was a superb squad performance of 30 players, each and every one contributing to the success of the day, well drilled by the management team of Damien Dunnion, Joyce McMullan and Emmet Gallagher. The full squad was as follows :- Daniel McIntyre, Jake Graham, David Monaghan, Calum McCrea, Leo McGowan, Fiachra O'Donnell, Senan Carr, Conor Meehan, Ruairi McLaughlin, Daniel Quinn, Kiernan Deignan, Caolan Sweeney, Mikey Duke, Rian Carr, John Bell, Daniel O'Sullivan, Michael McMullan, Callum Dunnion, Shayne Martin Kilcoyne, Conor Quinn, Seamus Og Caldwell, Fionn McCabe, Joseph Woods, Oisin Doherty, Tiernan McBride, Kevin Muldoon, Terence McGovern, Theo Colhoun.

Below the Aodh Ruadh U12 team 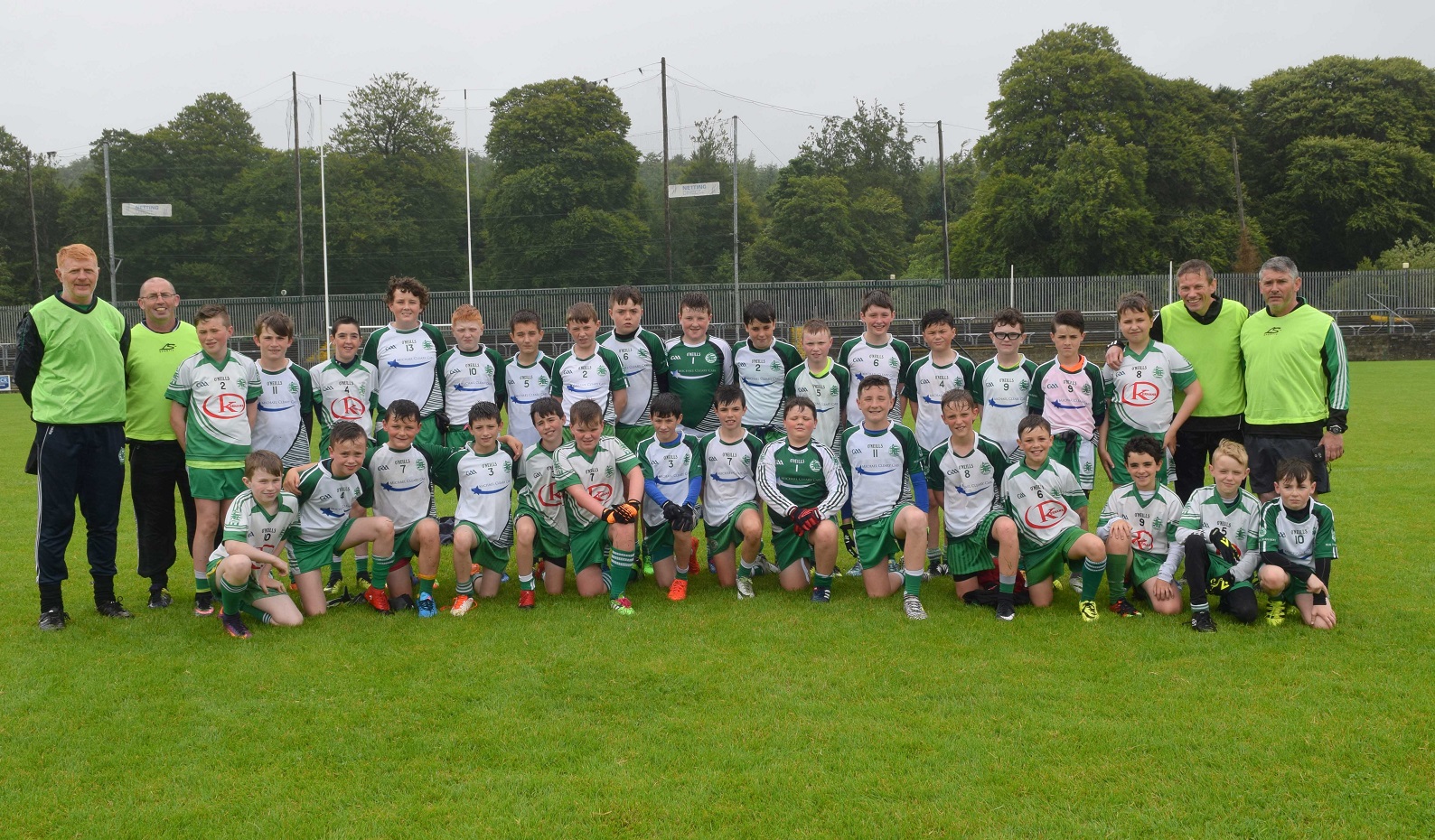