Gaoth Dobhair turn on the style in the second half to overcome St. Michael’s 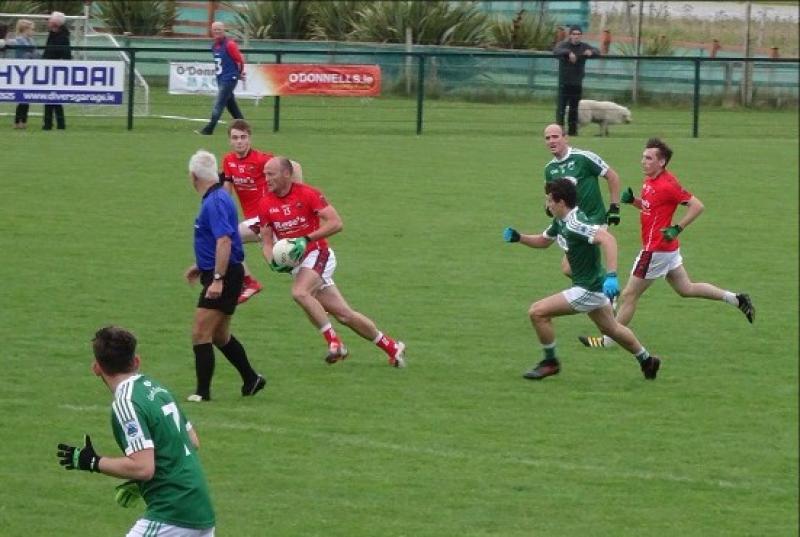 Colm McFadden on the ball for St. Michael's in Magheragallon

Daire O Baoill and James Gallagher scored the goals as Gaoth Dobhair pulled away from St Michael’s in the second half to claim the  league points in Magheragallon.

The goals, which turned the tie, were scored in the space of five minutes at the start of the second half.

Up to that this was an evenly contested game with the sides level twice in the first half.

Gaoth Dobhair’s lead of two points at the break, 0-8 to 1-3, looked far from being enough given they had played with the stiffish breeze in their backs and down towards the clubhouse end of the ground.

With Kevin Cassidy playing a roving role around midfield and Daire O Baoill and Niall Friel attacking from the half-back line, Gaoth Dobhair got off to a lively start.

They recorded three quick points from Cassidy, Friel and Noel Kelly inside the opening four minutes.

But St Michael’s were into the running game too and  a sweeping move involving Daniel McLaughlin, John McFadden, Brian McLaughlin and Colm McFadden ended with Andrew Kelly flicking to  the Gaoth Dobhair net on five minutes.

A minute later Liam Paul Ferry, who had fine game, charged forward for a super point and the lead 1-1 to 0-3, in favour of St Michael’s.

The game was fast and flowing at this stage and turned back in favour of the locals.  Veteran James Gallagher with a fine strike and two points in the space of a minute from Eamon Collum restored Gaoth Dobhair two point advantage by the end of the first quarter.

Daniel McLaughlin, who ran at Gaoth Dobhair at every opportunity, made it a one point game with a little over ten minutes to half-time.

Noel Kelly with the game’s first pointed free and Cassidy with his second scored for the boys in green while Liam Paul Ferry responded for St Michael’s.

But the two quickfire Gaoth Dobhair goals in the opening seven minutes of the second half turned the tie on its head.

By the 35 minute mark, Gaoth Dobhair had extended their half-time advantage out to seven points, 2-8 to 1-4.

The pace and running of Daire and Naoise O Baoill and the football craft of James Gallagher had carved open the St Michael’s rearguard.

And it did not get any better for the visitors as Kelly, James Carroll, Naoise O Baoill and Collum kept the scoreboard clicking.

And the St Michael’s challenge had fizzled out long before the end  though to their credit Hugh O’Donnell, Liam Paul Ferry and Lee McColgan kept plugging away and were rewarded with late points.