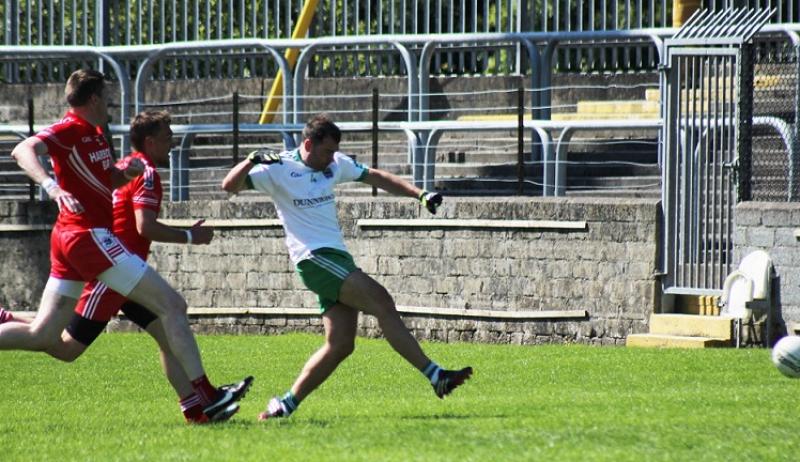 Sean MacCumhaill's, thanks to a good second half display, got the better of a spirited Killybegs in MacCumhaill Park.

The Twin Towns side needed all their craft to overcome the bottom side in the Division, as they were made fight all the way to the final whistle.
It was a very even first half but at the end of the 30 plus minutes Killybegs held a narrow one point advantage.
Gary Wilson (free) and Gavin Fireman Gallagher had the opening points for the home side but Owen Gallagher and David McGuinness levelled for the Fishermen. Stephen Mulligan and Steven O'Reilly opened the gap to two and O'Reilly struck for the first goal and a 1-4 to 0-2 lead.
But Killybegs came storming back with two points from Owen Gallagher and a goal from Daniel O'Keeney after Jack McSharry's effort was blocked to level matters.
Jack McSharry put Killybegs ahead, but Steven O'Reilly levelled, and this pattern continued to the break. McSharry and O'Reilly again traded points before Daniel Breslin (free) and John Ban Gallagher put Killybegs two clear before O'Reilly had the final say of the half to leave it MacCumhaill's 1-7, Killybegs 1-8 at the break.
The home side got a great tonic start to the second half with a goal from Rory Dunleavy inside half a minute. It put them in a lead that they never relinquished.
Daniel O'Keeney had a Killybegs point but Stephen Mulligan, Gary Wilson (free) Mulligan again opened a four point gap.
Eamon Bonner pointed for Killybegs and Daniel Breslin reduced the leeway to two, but Gary Wilson replied.
Owen Gallagher had his fourth point of the game before Gary Wilson and Mulligan pushed the MacCumhaill's lead to four once more.
From there to the finish, points were traded with Steven O'Reilly (2) and Gary Wilson pointing for the home side while Daniel Breslin had three for the visitors.
Just before the end MacCumhaill's were reduced to 14 when Rory Dunleavy picked up a second yellow card.