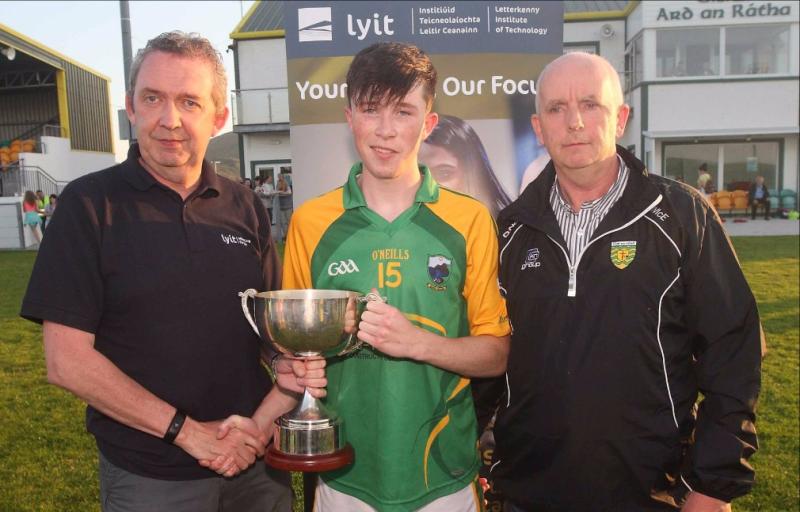 Aaron Doherty was the toast of Naomh Columba  on Monday night as he hit eleven points in their  win over Sean MacCumhaill’s  in Pearse Park, Ardara.

Doherty,  a member of this years Donegal minor team, proved too hot to handle as he split the posts from all ranges from play and placed balls and he also managed to land two  ‘45s’.

He scored 0-7 of his total in the first half to help his team to a 1-12 to 1-2 half-time lead and he also had a hand in the Naomh Columba goal scored by Dillon Kelly.

Oisin Gallen, also a member of Shaun Paul Barrett’s county minor team, scored the MacCumhaill’s goal on his way to top scoring for the Twin Towns boys. Gallen scored 1-4 of the MacCumhaill’s total with the goal a truly individual score after he ran through the Naomh Columba defence from way out the field, before dispatching to the Naomh Columba net.

Gallen and Chad McSorley scored the MacCumhaills first half points.

With one hand on the league title at half-time man of the match Doherty added four more points in a more evenly contested second period as Mickey McMahon’s young  MacCumhaills side refused to buckle.

But there was no denying Naomh Columba, who defeated a highly fancied St Eunan’s in the quarter-final and Kilcar in the semi-final, were the better side and deserving champions.