Almost 35 years on: Patsy McGlanaghey gets his junior cap 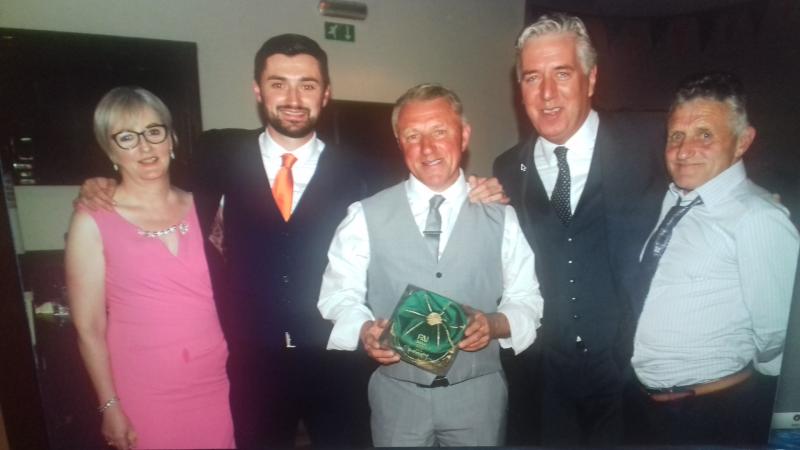 Patsy McGlanaghey is first to admit that there were plenty of other good players around Donegal who could have played alongside him on the Republic of Ireland’s junior international side back in 1983.
He was part of a classy Donegal League side that had won the Oscar Traynor Cup that year, but strangely he was the only player from the team honoured with international selection when Ireland played against the Isle of Man and the Birmingham and District League in England.
Last weekend, almost 35 years after his two international appearances, Patsy was presented with his international cap by the FAI’s Chief Executive John Delaney.
The Donegal Town native, who has long made Arranmore Island his home, had never received his international cap, despite the best efforts of so many over the years.
And given that Patsy lost his two Ireland jerseys, as well as his Oscar Traynor jersey, in a house fire back in the 1980s, the Junior cap will take pride of place in the McGlanaghey home.
“It came as a complete surprise when I received the cap at the weekend,” Patsy said this week.
“Over the years, there were many people who had tried to get something sorted. Paddy McFadden had tried and John Curran (Gorey) too, but it just didn’t happen. So when John Delaney presented it to me, I really didn’t know what to say, I was so delighted. I told him it was like winning the Lotto, especially after losing the jerseys in the fire.”
Patsy said Jerry Early and John McHugh had also played a big part in organising the presentation, while John Delaney himself had taken it upon himself to see it through.
The cap is just rewards for McGlanaghey’s efforts on the junior international stage and those appearances in an Irish shirt are something he’s still very proud of.
He remembers the games well and recalls wearing the No. 8 and No. 6 shirts. His selection came after the Donegal League won the Oscar Traynor Cup but strangely the Irish squad was made up mainly of players from the Dublin AUL and Cork - teams beaten by Donegal on their way to glory that year.
The Donegal League captain, Hugh Rua Gallagher, Donnchadh MacNiallais and Liam Sweeney were just three players from the side that Patsy felt were good enough to be honoured with international caps. He said that others in the team were just as good.
Despite playing much of his football with Donegal Town FC, Patsy was then playing with Dunkineely Celtic and he remembers giving his Ireland tracksuit to his friend and former manager at Dunkineely, Michael Baine.
A short time later, he rejoined Donegal Town and enjoyed plenty of success with the club before moving to his wife Maureen’s native Arranmore.
All these years later, Patsy is still considered one of the greatest ever footballers from the county. As a teenager, he helped the Donegal Youth League to FAI Inter-league success and speaks fondly of his time playing under the manager Richie Kelly, and along with players like Packie Bonner, Declan McIntyre, Liam (Keadue) O’Donnell and John McElwaine.
At just 16, Patsy and McElwaine spent time on trial with Manchester United. “I got to shake the hand of the great Matt Busby,” he said.
He caught the attention of other cross channel clubs too, among them Bradford City and Port Vale, and remembers Derry-based scout, Eddie Davis, calling to his home in Donegal town on several occasions.
But Patsy turned down those approaches and he eventually signed with Finn Harps where he teamed up again with Richie Kelly. The recently deceased Eunan ‘Busty’ Blake took over at Finn Park but while Patsy played in a few friendlies at the start of the season, he didn’t feature for the first team during that season (1978/’79) and eventually signed back with Donegal Town.
“That’s probably one of my big regrets when I look back now,” Patsy said.
“I should have stayed with Harps and gave it a go. But I was a young fellow then and I was thumbing everywhere. I just got fed up with thumbing lifts to matches on a Sunday.
“I remember Donie McIntyre was in charge of Donegal Town and he asked me to sign back which I did.”
Success at junior level quickly followed but shortly after his move to Arranmore Island, many of the McGlanaghey family mementos were lost in a house fire. The possessions, including Patsy’s football jerseys, were being kept in a house while the McGlanaghey family home was being renovated. Fortunately, no lives were lost in the blaze but the much-cherished football items, family photos and other possessions were destroyed. 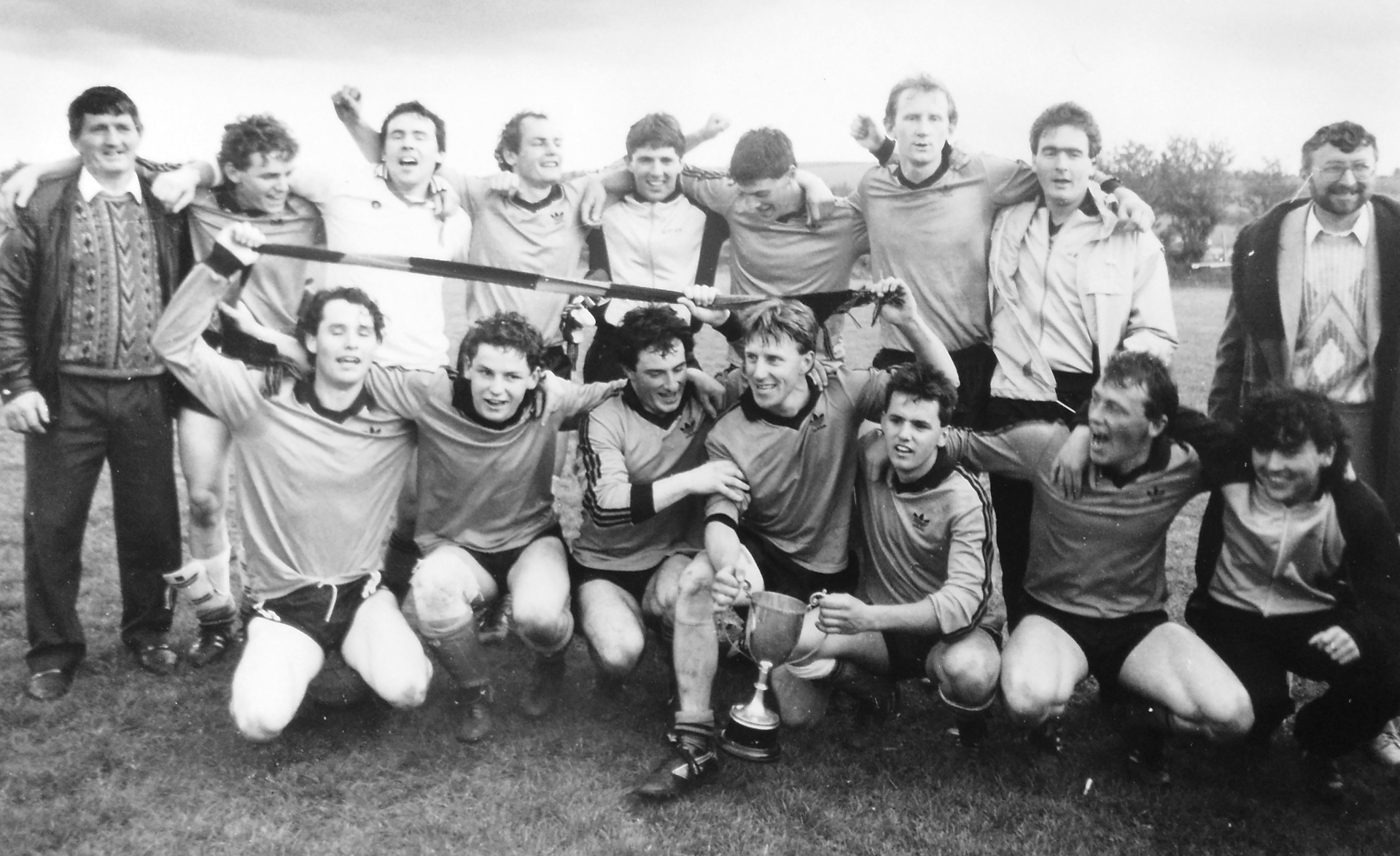 An Arranmore United side featuring Patsy McGlanaghey on the front row, centre.

Fast forward over 30 years and the international cap presented at the weekend, will go some way to making up for the items lost in the fire.
The presentation took place on Friday night as Arranmore United FC celebrated their 30th anniversary. Club member Jerry Early paid special tribute to John Delaney for the part he played on the night.
“John really did go above and beyond the call of duty to be with us on Friday night to present the cap,” Jerry said.
“He had been in Ramelton the previous weekend but insisted on being with us on the island to give Patsy his cap.”
Patsy himself was really taken aback by the award.
“It was a lovely surprise and I was really thrilled to get it,” Patsy added.
“I still love football. I still go to watch games and I think it’s great so see so much being done for young people playing the game now.”
Now 57, Patsy and Maureen have four sons, Gary, Kevin, Gavin and Christopher, while his brother John in Donegal town, is a well known referee in both soccer and GAA.
Patsy also has three sisters, Ailish Sweeney and Catriona Kelly in Donegal town, and Bridie Rowan in Killybegs.