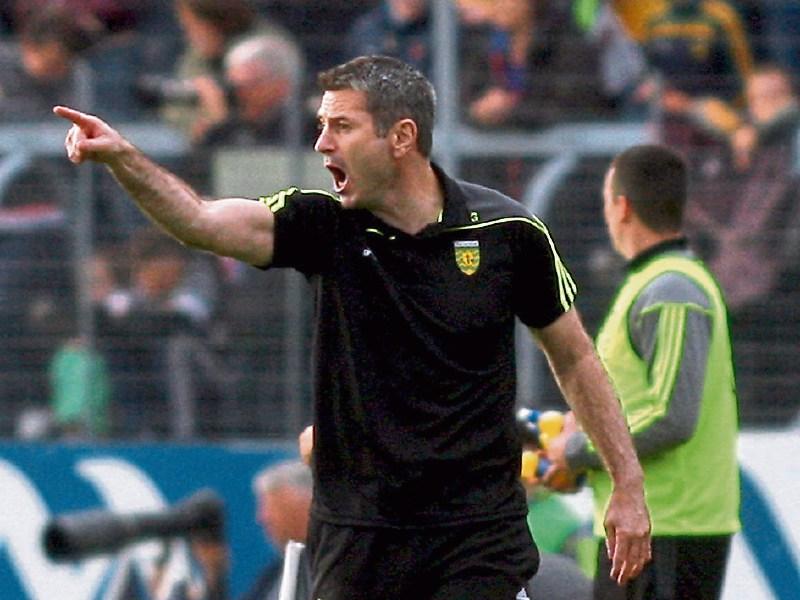 The Donegal boss requested to speak to the local media first before facing his national inquisitors. He also declined a request for a post match interview from Sky.

The manager was also non committal when asked about would he be staying on as manager to continue the rebuilding process.

“We were well and truly beaten. We were outclassed by Galway all over the pitch,” was the Donegal manager’s response to the opening question.

“A couple of things didn’t go our way, obviously missing the penalty, hitting the crossbar and losing Mark Anthony (McGinley) and conceding a sloppy goal and obviously the black card,” he added.

“All those things add up to a lot but overall we were beaten by a better team.”

Of the three goals he felt the second one inflicted the most pain and damage.

“The second goal was difficult, it was a situation we were in control of and then to lose Mark Anthony was a double blow.

“The third goal left us a massive task at half-time.”

He also felt Galway were sharper and are physically more developed than Donegal.

“They have won All-Ireland U-21s in 2011 and 2013. Those lads are what age they are now, we are on a different journey. We are just starting out with a very young team. We have a lot of lads who are 19/20 and it is very difficult for them to physically compete.

“Galway were in a minor final last year they won those two U-21s. We haven’t won an All-Ireland at U-21, we haven’t been at that level.

“We have a young team. We feel we have a lot of good young players but it is going to be a challenge.

“Hand on heart I would be very much aware of that, it would be a challenge to stay in the top ten having lost a number of players and with the age profile of the squad.

“We have a couple of players for whom this year is more than likely going to be their last year.

“We have a team that served Donegal well for 10/11/ 12/13 years and I knew it was the break up of it and you just don’t arrive and be able to compete with the big guns.”

When asked how long the rebuilding process was going to take he said he was not sure.

“You have Jason McGee there, he is 19; you have Kieran Gillespie who is 20, Eoghan Bán is 20. They are finding their feet.

“Caolan Ward first year in the team and you have Mark Anthony, Eoin McHugh, Jamie Brennan, Hughie (McFadden), they are not established county players. It is a long journey inter-county football.

“They have got to bed in. You get days like today when things did not go well. But we were in Croke Park in 2013, a similar type day. It is not easy but it is a test of character.

“Them boys that ended up having good careers also have had very tough days. The way teams are now they can pick you off.”

Asked how do you deal with high expectations, he said it was difficult: “Hand on heart at the end of last year hand we came up the road after being beaten by Dublin. We knew it was the end of the road clearly for that team. I felt we got off light on that night. I felt we relied on experience that night.

“I, for one, did not expect to land on the scene and to be able to compete with the top teams. We all know the league is the league and we invested heavy in it and we had lads doing a lot of training trying to get themselves to a level.

Did league give false hope?

“We would be very clear in our dressing room where we are at. There are teams that approach the league a lot differently to us.

“The first time I met the local press I said we had an awful lot of work done going into the league. I felt we needed that to have any chance to compete. Other teams move up the gears physically over the year.

“We would have got ready for championship more than the league. We knew the lads were going to struggle to sustain that but physicality is one area we feel we are well down the road.”

The Donegal boss also said that he was prepared for the criticism that will come on the back of this latest heavy defeat.

“We haven’t played to the level we wanted in the championship but I knew it was going to be difficult.

“From day one, I said we were carrying a huge panel. We took in a lot of fellas that were Under 21. We carried 15 and then brought in three more there – Niall O'Donnell, Peadar Mogan, and Mark Curran – since they finished their Leaving Cert.

“It started gradually with the likes of Paul Durcan and Rory Kavanagh. We knew it was coming fast this year and there will be a couple more I have no doubt.

Will you be staying on next year?

“We are after coming off a tough day there today. All you are thinking about is getting over the line and another game in the championship. That was the thoughts coming into today’s game.”