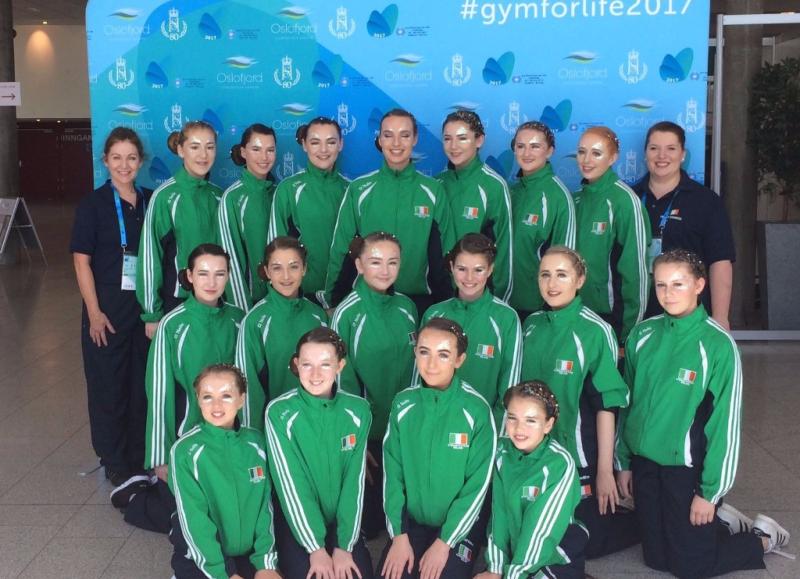 As a week of gymnastics came to a close, by the beautiful fjords of Vestfold, the 17 gymnasts from Finesse Gymnastics Club who were representing Ireland at this years World Gym for Life Challenge (WGFLC2017) waited patiently for the results.
After an action pack week of events, the team started the day at 09:25 for warm up and rehearsal. They then broke for lunch. After lunch the team went through all of their last minute preparations. The Irish team was sandwiched between Slovakia and the home nation, Norway. As they lined up to march on, the nerves disappeared and they performed their routine "Miss Invisible".
The routine gives the message about the importance of being yourself and inclusion especially about teenagers which is portrayed through gymnastics.
The Donegal gymnasts gave a flawless performance and received a rapturous applause from the audience and travelling supporters.
Routine over, the tears flowed as the team knew they could do no more. All of the hours, days and months of hard training had paid off.
It was now in the hands of the international judges from four different federations on the panel to decide the outcome.
The countries then marched on at the medal ceremony. On hearing the announcement that Ireland had received the bronze medal, the celebrations commenced.
This group of 17 gymnasts from finesse, have done their county and their country proud.
There will be a cavalcade for the gymnasts on their return on Monday the 31st leaving the Dry Arch Complex at approximately 4.30 p.m.