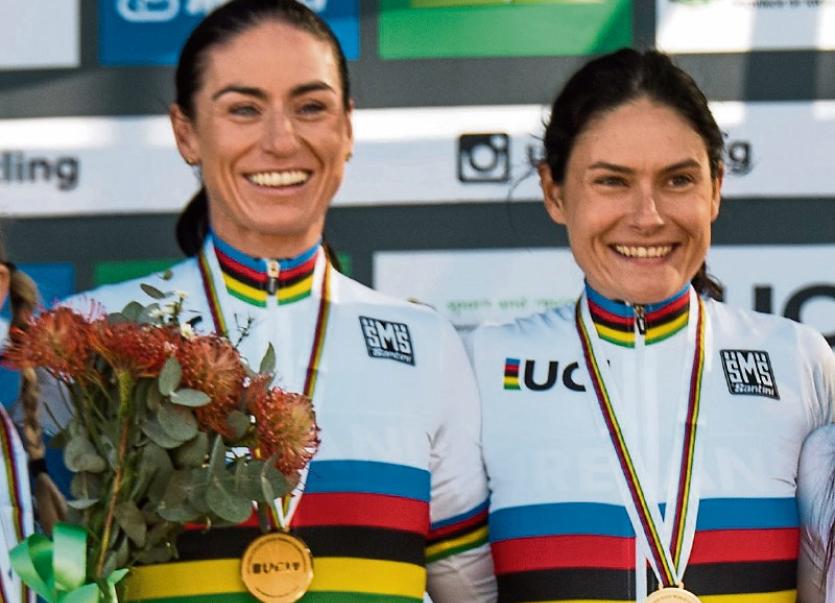 Katie-George Dunlevy is on cloud nine this week after achieving another lifetime dream when winning double gold at the World Paralympic Cycling Championships in South Africa.

Just about 12 months ago she travelled to Mountcharles, the birthplace of her father, John, to show off the gold and silver medals she had won at the Rio Olympics, and now she has achieved double gold at the worlds - a magnificent achievement by Katie and her partner, Eve McChrystal.

It was a busy weekend for Katie-George and Eve, winning the Tandem Time Trial on Friday.

Then on Sunday, over a very tough course, the pair won the Tandem Road Race.

Dunlevy was particularly delighted to win in the Road Race saying: “This is a massive thing.

“It’s everything I’ve worked for since Rio, but it’s also four years of hard work – and we have come so close to a win in the Road Race before.

“Road racing is my favourite part. I get such a buzz from it. We worked incredibly hard for this gold medal.”

"WWe have worked so so hard for this. I believed we could do it and wanted it so much.

"After becoming Paralympic champions and winning silver and gold in Rio we aimed to win gold here and become World champions. We knew we had to work hard and improve as athletes, stepping up and pushing for more and better and not giving up at anytime.

"We had pressure going into this as number one but our grit, determination, the work we had done and belief in ourselves and each other shone through.

"We knew it was going to be close on such a demanding, challenging and long time trial and that it was! A fight to the end, neck and neck and behind at times with GB all the way to the end

"We executed it brilliantly. Eve Mc Crystal handled and steered the bike beautifully and we knew that we could win it if our timing and positioning was right. I'm on top of the world...all the hard work is worth it. Putting on the rainbow jersey and hearing the National Anthem is what I've dreamed of as a cyclist and I'm so incredibly proud," said Katie-George, who paid tribute to Eve: "We make such a great team . . . the best female road tandem in the world; double gold, double rainbow stripes, double world champions," said Katie-George.

For now there will be a break for the cyclist, but there are plenty of races in the future.

"Next up is a bit of a break and downtime as I haven't had time off since after Rio last year. After the break I'll be back training for next year and my first race will most probably be in November.

"Preparation will firstly be for the Track World Championships which take place around March/April2018.

"I've no plans to go over to Mountcharles in the immediate future but do hope to get the opportunity as I am extremely proud to have won these medals for Ireland," says Katie-George.