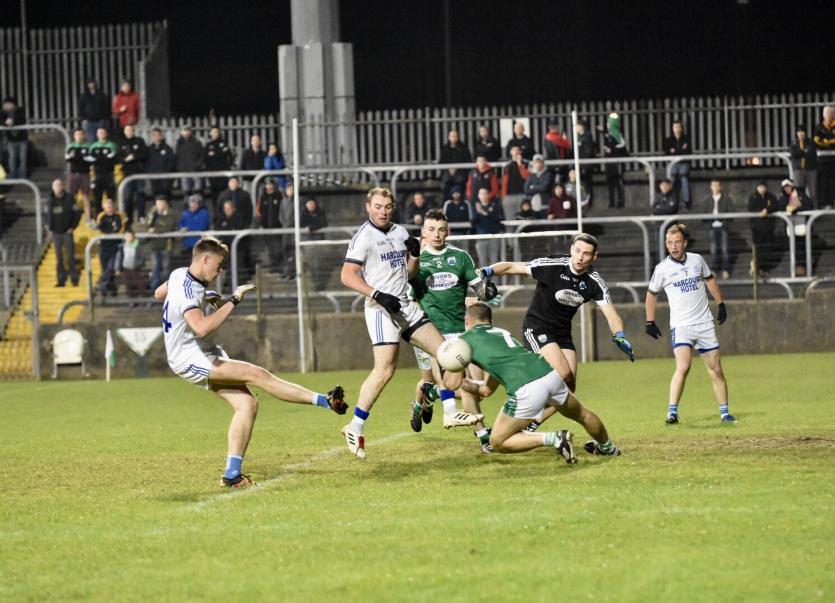 Naomh Conaill justified their favourites' tag in a very well contested Donegal senior semi-final in Ballybofey, coming back from the dead in the second half.

It was certainly a game of two halves. Gaoth Dobhair were supreme in the first half but the fighting spirit of Naomh Conaill came to the fore in the second half.
A goal from young Kieran Gallagher turned the game back in their favour on 40 minutes. They turned the six point half-time deficit around getting back on terms with seven minutes left and they always looked the more likely after that.

However, Gaoth Dobhair will wonder how they did not get something from the game. They had a number of chances to get an equaliser with Gavin McBride just wide with the last kick of the game from a '45'. And just before that Cian Mulligan elected to play the ball on the ground to McBride when he should have picked up and taken a point.

GREAT FIRST HALF
It was the Eamon McGee and Odhran Mac Niallais show in the opening half. McGee was the playmaker for Gaoth Dobhair while Mac Niallais kicked four massive points. His final point just before the break was as good as we have ever seen in MacCumhaill Park, winning the ball a la Tony Boyle, wriggling free from four Naomh Conaill defenders and nonchalantly stroking the ball over the bar.
The kick left Gaoth Dobhair 1-8 to 0-5 ahead at the break and they were worthy of the margin.
James Carroll put them on their way from a free but Dermot Molloy was through at the other end with a goal chance but he blazed over.
MacNiallais got his first from a free from close to the sideline on six minutes and Cian Mulligan showed great close control, basketball style, to hit the third. Eamon McGee was central to most of these scores, showing as a target man and also setting up scores from around midfield.
Mac Niallais added his second after a soft free award to Eamon McGee but there was a similar award almost immediate at the other end and John O'Malley pointed.
Naomh Conail had another half goal chance on 14 minutes when Odhran McFadden Ferry fumbled a cross and Dermot Molloy was in but he elected to fist over and cut the deficit to two, 0-5 to 0-3.
It was then that Gaoth Dobhair pulled away. Eamon McGee set up Daire O Baoill for a point and after a poor kick-out Odhran Mac Niallais punished, but the killer score came on 21 minutes when Michael Carroll powered through the Naomh Conaill defence, which opened rather easily, and he fired to the roof of the net.
John O'Malley pointed a free after Brendan McDyer was fouled but James Carroll showed great footwork at the other end, getting clear to clip over with his left.
Neil McGee, who had been booked earlier, could have been punished for a late challenge on Ethan O'Donnell in midfield as the Naomh Conaill player fielded a kick-out.
Dermot Molloy missed from 20m before John O'Malley had Naomh Conaill's last first half point from a free before Mac Niallais took the curtain down on the scoring with a thing of beauty.

Whatever manager, Martin Regan said at the break, Naomh Conaill were lively at start of second half with Brendan McDyer winning free on 20 seconds and John O'Malley pointed.
Kieran Gillespie showed the way at other end and he won free for James Carroll to cancel that score. Ciaran Thompson, moved to the edge of the square, hit over a good point on 38 minutes.
The fat was in the fire two minutes later as Naomh Conaill worked a goal. Anthony Thompson was at the start and Eoin Waide had the shot, which was saved, but it fell to sub Kieran Gallagher and he showed maturity to fire to the net from close range.
Almost immediately Eoghan McGettigan fired over a free (John O'Malley had been replaced seconds earlier) and the margin was down to the minimum, 1-9 to 1-8.
Gaoth Dobhair sent in Kevin Cassidy but they hit three shots short in as many minutes. It was the same at the other end. Eunan Doherty was wide and Dermot Molloy was short with good chances.
It was Eamon McGee who engineered the next point sending Niall Friel in but Naomh Conaill hit back immediately with Eoghan McGettigan pointing.
It was time for the big players to step up and Leo McLoone obliged winning a free and young Eoghan McGettigan levelled from 42m.
Daire O Baoill had a great chance for Gaoth Dobhair but he went for the effort first time and it was blocked by Kevin McGettigan and Naomh Conaill came forward for Brendan McDyer to win free and McGettigan put his side in front for the first time in the contest with 55 minutes on the clock.
McGettigan repeated the feat almost immediately to push the Glenties men two clear. It was a complete turnaround and with two minutes left Ciaran Thompson pushed the lead to three with a great point off his right.
Michael Carroll pulled a point back and Gavin McBride pointed a free. The excitement was fever pitch and Gaoth Dobhair had a great chance to level, but Cian Mulligan elected to pass rather than pick up and knock over the equaliser. Naomh Conaill lost Kieran Gallagher to a black card before Gavin McBride had the final kick, a '45', which just missed the target by the minimum.