Impressive win for Ollie Horgan's side 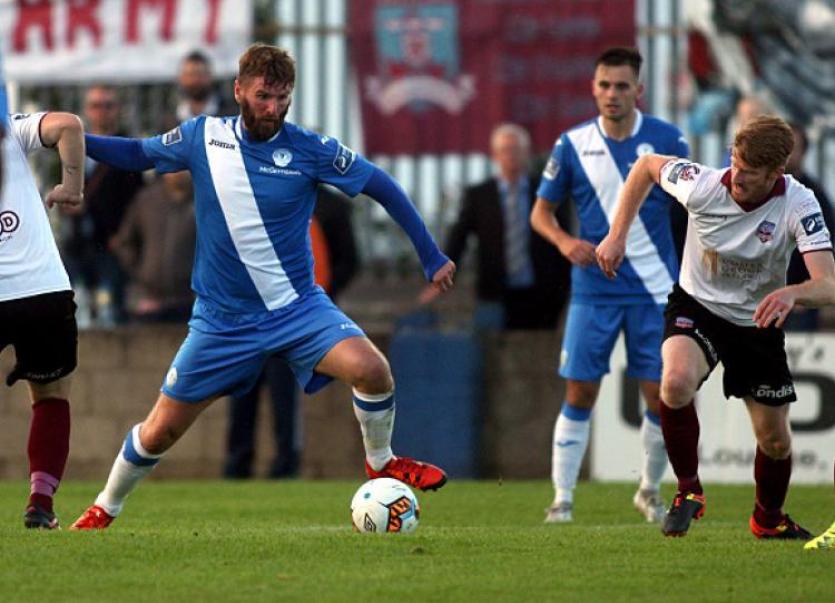 Paddy McCourt who was forced off because of injury in Cobh on Saturday night.

Finn Harps picked up their first league win of the new season as they struck late to take the points at St. Coleman’s Park in Cobh on Saturday night.

John O'Flynn opened the scoring on 81 minutes and then deep in injury time a second from Ciaran O’Connor completed the victory.

It was the Cork side’s first defeat of the season, and the result gives Harps their first league win in only their second outing of the campaign.

In a closely fought encounter, Harps got themselves in front with nine minutes remaining when O'Flynn steered the ball home from close range. Cobh keeper Paul Hunt could only parry Mark Timlin's free-kick and when the ball was returned back in front of goal, O'Flynn pounced to score.

Then four minutes into injury time, Ciaran O’Connor scored his first of the season to seal the points.

It’s an impressive result for Harps who unfortunately lost Paddy McCourt to injury.

The midfielder was back in a Harps side that showed several changes from Monday night’s league cup win over the Mayo League with Mark Coyle impressing at right back and Ciaran Gallagher, Keith Cowan and John O’Flynn all included from the start.

After a scoreless first half, Gallagher had to be alert on a number of occasions as Cobh pressed for the opener. The Harps keeper saved well from Dareen Murphy’s header while there were also chances for Cian Leonard and substitute, Kevin Taylor.

But once Harps got their noses in front through O'Flynn, Cobh looked in real trouble and the Donegal side the long journey home would be made a little easier when O’Connor scored the second late on.